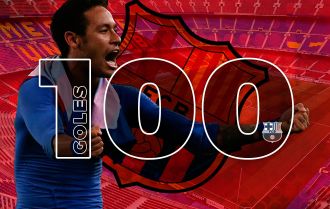 Monday, 03 April 2017
On Sunday, Neymar took another step towards history as he scored his 100th competitive goal for Barcelona, a feat that had only been managed by 15 other players in club history.

As the clock was winding down, the Brazilian scored the last goal of the Blaugrana's 4-1 rout of Granada at Estadio Nuevo Los Carmenes.

It took the former Santos star only 178 matches to reach triple digits, even outpacing Lionel Messi. The Argentinian forward needed 188 matches to achieve the 100-goal milestone.

Eventually, Messi will no longer be the best player in the world, but his legitimate heir may already be playing at the Camp Nou, so Barcelona fans have no reason to be pessimistic about the future.

Where Neymars goals have come

Against Granada, Neymar extended his hot streak, during which he has led the Catalans' improbable comeback against Paris Saint-Germain and Brazil's wins versus Uruguay and Paraguay.

At 25 years of age, it's fair to say he still has a lot of gas left in the tank.

Nacho: I'm very proud of the values Real Madrid have taught me

It has been Nacho's most memorable season to date and the Spanish defender joined in on the action, both by scoring a late goal and by hitting back at Gerard Pique's recent comments directed Real Madrid's way.

A difficult start to the match against Alaves meant Zinedine Zidane had to respond quickly to Raphael Varane's injury relapse, as Nacho shuffled from left-back to centre-back for the remainder of the game in seamless fashion.

"I am very proud of the values Real Madrid have taught me and I'm sure that if you spoke to the youth players they'd say the same thing," he said. "Everyone has their opinion, and some choose to make it public while others don't."

Happy with the goal, Nacho admitted he isn't quite as used to scoring as Sergio Ramos, whose acrobatics have saved Real on several occasions this year.

"Us defenders aren't so used to scoring, well except for Ramos, so it is always a joy to score," Nacho continued. "Every player's morale is boosted when they score."

As for the Estadio Santiago Bernabeu's criticism and boos, the defender admitted it wasn't their best performance but what matters is continuing their march towards the title.

"It isn't easy to play after international break, and it wasn't a great match, but what matters is the victory and meeting our goal of winning LaLiga."

Varane's injury opens up the door for more minutes, something Nacho welcomes in what is sure to be a jammed-pack April.

"April's matches will be beautiful and full of passion and it is too bad about Varane's relapse," he concluded. "I'm going to approach every Real Madrid match as if it were my last.

"It is a real gift to play for Real Madrid."

Continuing to force his name into the conversation despite limited playing time, Isco has further cemented his image as a fan favourite at the Estadio Santiago Bernabeu.

Out of nowhere, Isco rocketed in a late goal to secure all three points against a pesky Alaves side.

Given his adaptability to Zinedine Zidane's 4-3-3, the ex-Malaga man didn't seem to mind he wasn't playing in his preferred No. 10 role, while the French boss has since come out and stated he hopes Isco will stay.

Because of BBC, he has to play in midfield and he has adapted quite well to the challenge, starting his passing moves and dribbles farther away from goal.

With a busy April ahead, Isco is sure to play a key role in his side's chances.

Zidane: I want Isco to renew his deal and stay at Real Madrid

Real Madrid coach Zinedine Zidane would like for Isco to sign a new contract and stay at Estadio Santiago Bernabeu for the foreseeable future, after the Spain international's well-struck goal helped Los Blancos during a 3-0 LaLiga win over Alaves.

The ex-Malaga midfielder made it 2-0 in a tricky game, rattling home a brilliant finish from a tight angle when the chance had appeared to have escaped him.

"I want him to renew, he is an important player," Zidane told his post-match press conference.

"He wants to stay here, to play here. I am happy with his performance, not only for the goal but for what he did between the lines, what he helped the others do.

"Every three days there is an important game. Everyone can have their opinions but to win LaLiga and the Champions League makes every player important.

"When Isco plays, he does well, but we have 24 players and they are all important."

Real Madrid found it tough against Alaves, who did well in the second half, but eventually the hosts showed their quality with some clinical finishing.

"We played against a team who are doing very well, who haven't lost that many games," he added.

"In the first half we were much better, we started the game well. In the second it was worse, above all due to our possession of the ball.

"We lost the ball a lot, which we can't keep doing. We scored three goals, but we kept a clean sheet which is important. We know that we always have to improve, but playing every three days doesn't allow you to always play a perfect 90 minutes.

"What we have to think about is that we will always do good things. The first half was spectacular, but in the second we lost the ball very easily. We were in difficulty, it wasn't a great time."

Having watched Isco kill the game off, Zidane was satisfied that Real Madrid have the power to bypass any side.

"The ball arrived at Cristiano [Ronaldo], he passed to Isco and we scored," he explained. "We know that at any moment we can do damage to our opponent."

Manchester City's 2-2 draw at Arsenal has prompted faint title talk from the visitors' camp, but their Emirates Stadium stalemate only exposed the enduring frailties that persist with Pep Guardiola's side.

Twice City took the lead, through Leroy Sane and Sergio Aguero, but twice they were pegged back as Arsenal equalised through Theo Walcott and Shkodran Mustafi.

While City can move within eight points of Premier League leaders Chelsea with a win at Stamford Bridge on Wednesday, their inability to kill off troubled Arsenal suggests Guardiola has his work cut out to cultivate a side that can mount a challenge for the title, let alone eclipse Chelsea this season.

Defensively, City were regularly troubled by an Arsenal attacking unit that have themselves flattered to deceive in recent fixtures.

Guardiola praised stand-in right back Jesus Navas, who applied himself manfully despite the ominous prospect of a tussle with Alexis Sanchez, though the City winger's cameo in defence only served to highlight the paucity of options.

"I played him because Bacary Sagna was injured and Pablo Zabaleta were not ready," Guardiola told Sky Sports. "Jesus always deserves the best because he is an excellent guy and I was so happy with him."

Fit-again club captain Vincent Kompany remained on the bench despite being available and cut a frustrated figure watching his team mates toil defensively.

City have conceded 32 league goals this season - 11 more than second-placed Tottenham Hotspur, nine more than Chelsea - and the backline requires a significant overhaul this summer.

Guardiola has crafted a sleek offensive unit but, after a breathless opening 15 minutes at The Emirates, they appeared to ease off as their intensity levels dropped and they allowed Arsenal back into the match.

City only reasserted themselves after Walcott poked home an equaliser, and were unable to rouse themselves in the second half to push on and secure all three points.

"We didn't play in the first half," Guardiola conceded, "after the goal we forgot to play, the desire went.

"In the second half we played more. We suffered a lot in the first half because we did not make those passes together."

The match summed up City's maiden season under ex-Barcelona and Bayern Munich coach Guardiola, as they started brightly, dropped off significantly and ultimately lost their way.

Despite the re-emergence of title talk, the Spanish coach has much to do in order to craft a championship-winning side out of a talented - if flawed - squad.

Wenger praises Arsenal fans as end of an era looms

Arsene Wenger lives to fight another day after Arsenal twice battled back to draw 2-2 with Manchester City on Sunday but, despite his praise for the club's fans, his side are in danger of missing out on the top four for the first time since 1996.

Against a background of supporter discontent over the form of Wenger's team as the Frenchman decides his future, with a protest outside the ground before kick-off urging the manager to leave his post, Arsenal were nervy from the start.

When they fell behind to Leroy Sane's fifth-minute opener, the hosts appeared destined to collapse in a fashion that has become all-to-familiar under Wenger, whose charges have won one of nine matches against their top seven rivals this season.

However, Arsenal rallied - demonstrating a mental strength that has been absent in recent weeks - - and silenced some of the dissenters with a gutsy fightback.

"Despite all that's happened on the fans front, I felt our fans were fantastic today," Wenger told reporters. "In very difficult moments in the game, I felt our fans, at 1-0 down , 2-1 down just before halftime, could have turned against us.

"I felt they were absolutely sensational and helped the team today get through that difficult moment."

Regardless of Arsenal's comeback, Wenger's future appears as precarious as ever, with CEO Ivan Gazidis telling fans at a scheduled meeting before the match that the club's recent underwhelming form could be a "catalyst for change".

"I'm not aware of what's happening outside," Wenger added. "What's important in football is what happens on the pitch and inside the stadium, and I feel the fans were absolutely outstanding today."

The Frenchman may yet decide to stay at The Emirates, although there is an increasing sense of finality about his tenure and Wenger's proud record of 20 consecutive top-four finishes seems in jeopardy.

Arsenal are sixth on 51 points, with 10 games to play, two behind Manchester United in fifth and seven adrift of Manchester City, who occupy the fourth and final Champions League qualifying position and have played a game more.

Some fan discontent may have been quelled by Arsenal's recovery on Sunday but unless Wenger can oversee an upturn in form, his proud top-four record, and reign in north London, are set to be undermined by his side's continued underachievement.
Email : [email protected]
Προηγούμενο : PSG beat Monaco to lift fourth straight League Cup | Επόμενο : PSG and Manchester City line up as Pepe turns away from China move
Προβολές : 385
- 2992 προηγούμενη ημέρα