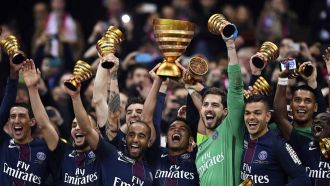 Sunday, 02 April 2017
Paris St Germain thrashed Monaco 4-1 in the French League Cup final on Saturday to lift the trophy for the fourth year in a row and gain a potential psychological edge over their rivals for the Ligue 1 title race.

Julian Draxler put PSG ahead and Thomas Lemar levelled for Monaco before a goal from Angel Di Maria and a double from Edinson Cavani sealed a lively encounter at Parc OL.

PSG, who trail Monaco by three points in Ligue 1 with eight games left in the season, are now unbeaten in the French League Cup since a quarter-final defeat against St Etienne in November 2012.

Unai Emery's PSG looked nothing like the team who were knocked out of the Champions League by Barcelona with an embarrassing 6-1 defeat, while Monaco's French prodigy Kylian Mbappe put on a disappointing display.

"After what happened against Barca we had to win this final," said Di Maria.

PSG midfielder Adrien Rabiot said they had a point to prove against the Ligue 1 leaders.

"We played a great game. Everybody said everywhere that Monaco were the favourites, that they were the best team in France. We showed who we were tonight," he said.

PSG, who were without injured centre back Marquinhos, started brightly.

Marco Verratti found Di Maria in the box with a splendid through ball and the Argentine, facing keeper Danijel Subasic, played a short pass to Draxler who tapped in to put PSG in front after four minutes.

Monaco, who missed the suspended Fabinho and the injured Radamel Falcao, struggled to create chances but equalised at the end of a superb move in the 27th minute.

Bernardo Silva took two defenders out of the game with a lobbed pass for Sidibe, who set up Lemar just on the outside of the box, and the midfielder curled a superb shot into the top corner.

PSG, however, made the most of another defensive mistake by Monaco as Di Maria beat the offside trap to collect Draxler's pass and beat Subasic one minute before halftime.

Cavani extended the lead nine minutes into the second half with a fine volley from Verratti's perfect cross from the right.

The Uruguay striker missed the target minutes later, before Di Maria's curled shot was also parried away by Subasic as PSG came close to a fourth goal.

That finally came in the last minute, when Cavani fired home from close range from Di Maria's cross from the left to hand PSG their seventh League Cup title with his 40th goal in 40 competitive games this season.

Atletico Madrid won 2-0 in Malaga on Saturday evening, but Diego Simeone admitted that it was not as simple as the scoreline suggested.

With so many players missing due to suspension, injury and a tiring international break, he was especially pleased with the way Los Colchoneros dealt with a tricky situation.

"What I'm most strengthened by is the bravery and the fight against difficult circumstances," he said in his post-match press conference.

"We came into this match with two youth teamers and with two centre-backs on the bench, yet the team solved it anyway.

"The fact that we can solve a match against a team who caused us difficulties tells you a lot about the squad depth and the work that is put in.

"It's obvious that when the team works together, there is always a chance [to win]."

Asked how comfortable he felt the victory was, Simeone stressed that he been uneasy at points on the sidelines, but pointed to the fact that Atleti did manufacture a number of sights of goal.

"If you look then my suit is covered in sweat, as it wasn't simple," he told reporters.

"We didn't have much of the ball, but we did have four very clear chances.

"We attacked better and they counterattacked, but then it changed after the goal and then they had the ball, but without chances to score.

"The important thing was to work in search of what we need."

However, with a midweek round coming up and with a difficult fixture against Real Sociedad, Los Rojiblancos must get back to work soon, as Simeone was quick to point out.

"There isn't much time to celebrate the victory, but we leave content," he said.

That match against the team from San Sebastian kicks off at 21:30 CEST on Tuesday.

Zidane: Pique? Real Madrid are a big and great club, nothing more

As Real Madrid return to action following the international break, coach Zinedine Zidane was keen to avoid adding any flames to the fire of Gerard Pique's comments.

The Barcelona centre-back was a surprise critic of Real's values, which greatly angered senior staff at the Estadio Santiago Bernabeu.

However, while Zidane did launch a defence of his club, he was determined to avoiding wading further into the controversy.

"I understand the concern about it but I'm truly only thinking about our next game," he said when asked about Pique's comments. "We are a very big and great club, nothing more.

"Now, I'm focused only on Alaves along with the players, my staff and the fans. We are interested in that and not getting into anything else.

"It is just talk. What I'm interested in is what we can do on the pitch. The image we transmit and what we have is something nobody can argue with.

"This club is massive and nothing will change that. I'm not going to get involved in anything else. [Pique] says one thing and I say another. I'm done with this topic."

A hectic month of April starts with a home clash against Alaves on Sunday afternoon and given their impressive results when visiting other big clubs this season, the Frenchman is taking nothing for granted.

"They have already won at Barcelona this season and drawn at the Calderon so that shows they are a team who are capable of doing very good things," he continued.

"Alaves are a tough opponent but we have prepared well for them and have had a lot of time to do so.

"This is a time too when we need our squad now more than ever. We have nine games in 28 days and will need everyone to be ready for the final stretch of the season."

Barcelona coach Luis Enrique attempted to take some of the brunt off Gerard Pique, following another controversial week for the defender.

The centre-back hit out at Real Madrid's values and what the club stand for, which had Los Blancos briefly pondering legal action, and his coach has now attempted to cool the situation by focusing on the positives Pique gives the side.

"I'm much more radical than Pique so it is perhaps better that I don't talk," he told reporters ahead of the Blaugrana's clash with Granada. "You can interpret that as you wish.

"It is not important what I think or don't think about this. We would have to find another Pique and with the game that he gives us, Pique would have to be cloned. There is no one like him."

The ex-Roma boss also insisted that there is a great excitement within his squad as they approach the stage of the season when major honours will be handed out.

"We are positive heading into the final stretch, those feelings have been backed up by the way the players have trained and it is like the end of year at school," he added.

"People are working harder when it is time for exams and I am sure it is like that at other teams. I hope to see a good version of my team.

"We are very motivated but I'm sure that our rivals are too. The titles are approaching, along with the possibility of winning them."

The Blaugrana go into Sunday's clash without Pique (rested), Lionel Messi (suspension), Arda Turan and Aleix Vidal (both injured) but Luis Enrique was coy on whether or not that would force him into major rotations.

"It is clear that as we approach the end of the season, all that matters now are the points and we know that we will need a good performance," he continued.

"I don't know if I will make many changes, I'll do what is best for the team. What is true that with the kind of schedule we have, you need a squad and not 11 players."

On Friday, Barcelona talisman Lionel Messi travelled to Venice in order to visit his personal nutritionist.

The Argentine is unavailable for Luis Enrique's side against Granada on Sunday through suspension, having picked up a costly booking last time out against Valencia.

As reported by Sport and confirmed by MARCA, Messi arrived in Venice on Friday afternoon for a check-up with nutritionist Giuliano Poser.

However, the trip was a brief one and he returned to Barcelona on Friday night, meaning that he was available to participate in training on Saturday at Sant Joan Despi.