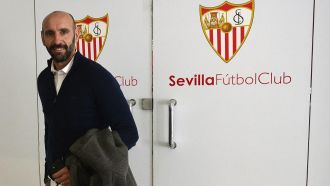 Friday, 31 March 2017
Sevilla have confirmed that the club's director of football Monchi will leave at the end of the season.

An agreement was reached between both parties and a press conference will be held on Friday at 12:30 CET with president Jose Castro for him to announce his exit.

Following training on Thursday, Monchi met with technical secretary Oscar Arias to discuss his exit and at 14:00 CET, the Executive Committee met, without Monchi in attendance, to determine how best to deal with his departure.

On Thursday evening, following a board of directors meeting chaired by Pepe Castro, the club confirmed Monchi's impending move.

Monchi is expected to take over as sporting director of Serie A side Roma following 17 years at the Estadio Ramon Sanchez Pizjuan and is set to sign a three-year deal at the Giallorossi this summer.

Negotiations between the director and Roma started a long time ago and are already at a very advanced stage, with the signatures on the contract being all that is missing.

Isco: Real Madrid have a team that can win LaLiga and the Champions League

A LaLiga and Champions Legaue double is very much in Real Madrid's sights and playmaker Isco believes they have what it takes to win it.

Los Blancos are currently top of the table in the Spanish top flight, with a two point lead over Barcelona and a game in hand on their rivals.

In Europe, they face a difficult quarter-final tie against Carlo Ancelotti's Bayern Munich but Isco is confident in their chances.

"We are going through a very good moment in the season and have the chance to achieve our goals," he said at a presentation of his new Nike Mercurial boots. "We have the squad to win both tournaments.

"This team is accustomed to playing matches against difficult opponents and being aware of what is at stake, we will never lack motivation.

"There is a great desire to bring titles to our fans and bring them a lot of joy by doing so."

A tough run-in does await Isco and co. in the domestic season, with difficult games still to come against Barcelona, Atletico Madrid and Sevilla but he isn't unduly concerned.

"We are looking forward to a very hard but exciting calendar ahead," he said. "We feel confident that we can give our fans something to cheer because many of those tough games will be played at home."

Casillas: I'll always be grateful for the Bernabeu's support

In an exclusive interview in Friday's edition of MARCA, Iker Casillas reveals all about his Real Madrid exit and discusses why he will always be thankful to the club's fans.

Over the course of the interview, the goalkeeper told all, from his transfer, to the whistles of the Estadio Santiago Bernabeu and offers his thoughts on prominent Los Blancos figures such as Florentino Perez, Keylor Navas, Jose Mourinho, Zinedine Zidane and Sergio Ramos.

He offers his thoughts on why, despite a difficult relationship at times, the Bernabeu faithful will always have his gratitude and on Porto's crucial upcoming clash against Benfica.

Maradona: I'll have a word with Infantino about Messi's ban

The four-match ban handed to Lionel Messi for insulting an official surprised Diego Maradona, who insisted that the Barcelona forward is not the kind of person to lose his temper and that he would discuss the matter with FIFA president Gianni Infantino.

Pointing to the way the 29-year-old conducts himself with his teammates, Messi's former national team coach expressed his shock at the incident.

"It surprised me because he is a sensational kid who doesn't complain about anything," the Argentine legend told 'La Oral Deportiva'.

"He is a courteous person and he is a teddy bear with his teammates and with everyone.

"You have to be part of the dressing room or a training session to know if it is the kind of thing which truly reflects him."

Although he admitted that the insult was a serious one, Maradona was convinced that a four-match punishment was excessive.

"Even though the words were strong and serious, I think [the ban] can be changed," he said.

"I will speak with Infantino, as I think it's terrible.

"Four matches is an awful lot."

He also insisted that he'd had no input in the sanction, despite his role as an ambassador of FIFA.

"The ban started with CONMEBOL," he told the programme.

"I investigated and asked about it, but I didn't influence anything."

Finally, the 56-year-old analysed the detrimental impact that Messi's spell on the sidelines could have on the Albiceleste World Cup qualifying hopes, bringing up the impact losing Zinedine Zidane had on France in the 2006 final.

"I would compare it with Zidane's headbutt on [Marco] Materazzi," he said. "He left France with 10 men and was no longer the best player at that World Cup.

"The absence of Messi is decisive.

"There is one Argentina with him and another without him."

Messi will have to sit out his nation's next three qualifiers, unless his ban can be reduced.

Real Madrid prepare for the business end of the season

The home straight is upon Real Madrid in their quest for the LaLiga title but the path is anything but a simple one as Zinedine Zidane's men attempt to conquer the domestic league whilst also defending their Champions League crown.

As the international break comes to an end, the French coach is left to plot Real's path to glory without any further interruptions and a two-point, game in hand gap over Barcelona.

Zidane has guided Los Blancos to four wins from his four games after international stoppages but April is a whole different kettle of fish for those Spanish sides competing on multiple fronts, with games every few days and still the Celta Vigo rearrangement to be pencilled in at some stage.

Fortunately for Madrid, no fresh injury concerns have been picked up over the break and Raphael Varane is set to be fit for Sunday's game with Alaves.

Due to the double-header with Bayern Munich, El Clasico, and the Madrid derby in the coming weeks, it's the home games against Alaves and subsequent trips to Leganes and Sporting Gijon that are to be fulfilled by the fringe players as the coach rotates his pack.

With Casemiro suspended, Mateo Kovacic and Isco can expect to be dropped into the line-up versus the Vitoria club alongside Luka Modric, who was released from Croatia duty early.

Fans should prepare for further surprises as Zidane names his teams for this intense run, knowing that risk must be balanced with reward in the tricky banana skins just as much as the vital clashes against Bayern, Barcelona & Co. that could define Real's season.

Mauricio Pochettino, the head coach of Tottenham Hotspur, stated in his press conference that he would never manage Barcelona or Arsenal, ending rumours that he was in contention to replace Luis Enrique at the Camp Nou.

The 45-year-old played for Barcelona's Catalan rivals Espanyol - first between 1994 and 2000, and then between 2004 and 2006 - before becoming the club's head coach between 2009 and 2012, and he believes that the loyalty shown is more important than any career ambitions.

"I am a fan of Espanyol and love the club," the Argentine explained.

"I don't need to speak too much more about it.

"It's like if one day Daniel Levy sacked me, in a few years, for me it would be impossible to manage Arsenal.

"It is so difficult to keep the values, to be loyal, with your heart, with your emotion.

"It's the same with Tottenham now for me."
Email : [email protected]
Προηγούμενο : Cristiano Ronaldo Airport overshadowed by dodgy statue | Επόμενο : Neymar: I want to win the Ballon d'Or, but I'm in no hurry
Προβολές : 427
- 3171 προηγούμενη ημέρα