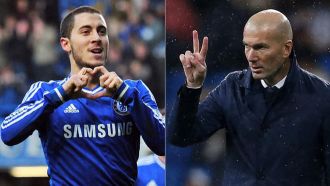 Hazard's admiration for Zidane goes back a long way

Tuesday, 28 March 2017
This summer promises to re-open one of the big transfer sagas that has been bubbling away for many years, and it involves two men - Eden Hazard and Zinedine Zidane - who are big fans of eachother.

With Real Madrid set to launch a new bid for the Chelsea star, it's worth going over how those involved have talked about their potential colleagues in the media.

"Zidane is the best player in history," the winger confessed in his last interview with Chelsea's official media.

"He was smart when he played, he was not quick but he could do everything with the ball. He scored a lot of goals in finals, like the World Cup and the Champions League."

Reciprocating the feeling, Zidane has talked up Hazard's potential even before he was Real boss, saying at the time that he'd sign the forward in an instant.

"Hazard is the world class player of the future," the Frenchman stated to MARCA in 2010. "He's very good and is going to be even more so.

"I would take him to Madrid with my eyes closed."

The coach has even previously put Hazard alongside Lionel Messi and Cristiano Ronaldo, marking him out as someone who he'd surely love to have at his command in LaLiga.

The exposure that Keylor Navas is experiencing at present may lead to negative situations for the custodian and for this reason, Zinedine Zidane is considering resting him for the match on Sunday against Alaves.

The Frenchman doesn't want to take risks and thinks that the best thing to do in light of a hard and competitive month of April ahead is to protect his No.1.

Navas plays for Costa Rica in the early hours of Wednesday against Honduras, so he will not return to Madrid until Thursday.

Faced with this situation, an extra day's down time will pay dividends later in the month.

The Estadio Santiago Bernabeu is always an unforgiving place and though the club have full confidence in him, it's not only Zidane who believes that some time out of the spotlight will be beneficial for all concerned.

In the match against Mexico for example, Navas didn't play well and his national team lost 2-0.

Since his return - against Borussia Dortmund on September 27 - the goalkeeper has missed cup matches and a league game.

Zidane decided to rotate on February 17, placing Kiko Casilla as the starter against Espanyol in a match at the Bernabeu which ended with a Real victory.

Casilla is likely to deputise again in the next match, but is not considered a threat to Navas' position at this stage.

The call of the Estadio Santiago Bernabeu is likely to prove hard to resist for Eden Hazard in the upcoming transfer window with Chelsea under pressure to at least sit down and hear out Real Madrid's offer.

A similar approach was made 12 months ago with Los Blancos dead set on the Belgian, who is admired by both the club hierarchy and coach Zinedine Zidane, although Hazard ultimately stayed put to lead Chelsea towards what will be his second Premier League winners' medal.

At the time, Blues director Marina Granovskaia is said to have told the winger that they wouldn't reject a future advance from Madrid out of hand, and are thus making fresh moves to keep the man who stuck around during a terrible spell for both club and player last season.

Roman Abramovich is reportedly willing to put 200 million euros into the transfer kitty this summer to convince Hazard that the London giants are intent on challenging for both the Premier League and Champions League in years to come.

James Rodriguez, Romelu Lukaku, Alvaro Morata, and Monaco's Tiemoue Bakayoko are all names being bandied about at Stamford Bridge as they attempt to make their own big money signings.

However the desire is strong at Real and Zidane loves Hazard's speed, skill and unpredictability, setting the wheels in motion for one of the upcoming summer's biggest transfer sagas.

Sarri recives Best Coach award for his work with Napoli

On Monday in Coverciano (Florence), the Italian Football Federation (FIGC) handed Napoli coach, Maurizio Sarri, the 'Golden Bench' award for Best Coach after the second place he achieved last season in Serie A.

He became the first coach of the Partnopei to win the FIGC prize, having triumphed by three votes over Juventus' Massimiliano Allegri and Sassuolo's Eusebio Di Francesco.

The prize is awarded based on the votes given by the coaches of Serie A, Serie B (Second Division) and Lega Pro (Third Division).

"Normally, when I receive prizes, I am not particularly happy because I think it's time that I could be dedicating to my work, but this is different,"Sarri said after receiving the award from FIGC president Carlo Tavecchio.

"I'm thrilled because it's been given by coaches and up until five years ago, I've been working in the third division."

In winning, Sarri broke the streak of Juve coaches, who had dominated the award in the last four editions; three twins for Antonio Conte and one for Allegri.

There was also a "Special Gold Bench" award given to Claudio Ranieri for last year's historic triumph with Leicester City in the English Premier League.

The salaries of the stars: Cristiano Ronaldo beats Messi for the first time

Cristiano Ronaldo is the player with the highest income for the 2016-17 season with a salary of €87.5 million, which, for the first time, exceeds Lionel Messi, who earnt €76.5 million, according to the list published by France Football.

The Portuguese, who won the 2017 Ballon d'Or, is thus ahead of the Argentinean star in the 19th edition of the 'Salaries of the Stars' published every year by the French magazine.

The revenue calculated by France Football includes the gross salary, bonuses and advertising earnings accumulated over the 2016-17 season.

As for the coaches, Jose Mourinho, who has been at the helm of Manchester United since last summer, took the top spot with €28 million.

Ramos: I don't think Florentino Perez will ask me about signing Mbappe

As a result of his excellent season with Monaco, Kylian Mbappe has been linked with Real Madrid, but Sergio Ramos is not expecting to be consulted on the decision.

He insisted that the forward would be welcomed at the Estadio Santiago Bernabeu, but did not want to get involved in speculation involving players still at other clubs.

"I don't think Florentino [Perez] will call me to decide whether or not to sign him," Los Blancos' captain said ahead of Spain's meeting with Mbappe's France side.

"Real Madrid's doors are open to the best players in the world and if he comes he would be welcomed, but it would be a lack of respect to talk about players who aren't in our team."

Ramos was also asked about France's Atletico Madrid star Antoine Griezmann, who has also been linked with a summer move, and the centre-back revealed how highly he rates the 26-year-old.

"Antoine [Griezmann] is a great player," he told reporters.

"I wish him the best except when he plays against us.

"He makes Spanish football better by being in our league."

Ramos had no explanation for Karim Benzema's continued absence from Les Bleus action.

"I'm not the one who does France's squad list," the defender said.

"He is one of the world's best forwards and I hope that he can, as I've read, return soon."

Focussing on La Roja, Ramos explained why he thinks the team's current successes are receiving less credit than they might be due.

"As a result of our good era, things are now appreciated a little less," those in attendance at the press conference heard him say.

"We are starting to recover the feeling of dominating matches and hope to find the consistency to achieve our objectives."

As for how long he has left in the red of Spain, the 30-year-old didn't want to discuss his retirement any time soon.

"I have a lot of time left at a high level," he stressed.

"I'll continue for as long as the ambition to improve and to win exists.

"I don't want to think about leaving [the national] team as I think it's very premature to speak about that."

Spain's clash with France kicks off at the Stade de France at 21:00 CEST on Tuesday night.

Mancini: Guardiola hasn't had a very hard life and in England things are different

Manchester City coach Pep Guardiola has come under fire from a man formerly in his position, Roberto Mancini.

The Italian brought the Citizens their first top flight title in over 40 years back in 2012, a triumph that the Spaniard has found difficult to replicate.

"He is a good coach, but he has not had much hardship in the position," Mancini told La Gazzetta hello Sport.

"This season he is finding it hard and there is a reason: in Barcelona he had Messi, Iniesta and a team of phenomenal players, in a league of two candidates, with Real Madrid as his only rival.

"Then he went to Bayern, who always wins.

"So he hasn't had a very tough life but in England it's a different story, because there may be six teams competing for the title."