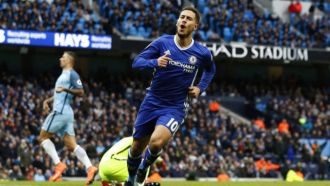 Monday, 27 March 2017
Ever since the scouting reports on Eden Hazard arrived at Florentino Perez's desk in 2012, Real Madrid have known about the qualities the Belgian playmaker's possesses, and time and again Zinedine Zidane has asked Florentino Perez to sign him.

The Real president has strongly hinted that he is preparing for a big galactico signing over the summer transfer window, and the French coach is hoping Hazard will be it.

Roughly 12 months ago, the Belgian star wasn't open to negotiating, wanting instead to persevere and turn around a poor season with a brilliant follow up campaign, which he has since followed through on.

Real Madrid were amongst the clubs interested then, and they'll be happy to hear he is much more open to negotiating this time around.

It has been said that Hazard has been learning Spanish, a move that some are interpreting as a sign that he is on his way, and Real Madrid signing director Juni Calafat was present during the Chelsea-Manchester United FA Cup clash a few weeks ago to test out his willingness to negotiate.

Hazard is back to his best this season, although an injury has kept him out in recent weeks.

The Blues are said to be interested in playmakers James Rodriguez and Isco, so a deal may also go along those lines as well, whereas Courtois could also end up back in the Spanish capital.

Hazard's contract with Chelsea ends in 2020 and his current salary of 10 million would see him alongside only Cristiano Ronaldo and Gareth Bale as one of the best paid amongst the squad.

The Real Madrid board still haven't met with the technical staff to discuss which players to prioritise over the summer, but one thing is clear: Hazard is a player whose talent makes him a great fit, and the Real hierarchy have been following him for quite some time now.

It is no secret that Zinedine Zidane wants Eden Hazard at the Estadio Santiago Bernabeu next season, but he may have to let James Rodriguez go if he is to get his wish.

It'd be a trade of No. 10s to lure Chelsea into making the deal, as the Blues are interested in the Colombian attacker, whereas Los Blancos are also after a keeper of Thibaut Courtois' quality.

In order to be able to afford Hazard's wages, Real would have to rid themselves of a midfielder to make room, and either James Rodriguez or perhaps Isco are the most similar player profiles that have already been linked to an exit away from the Spanish capital.

Hazard has returned to his best this year with 11 goals and four assists thus far.

President Florentino Perez has hinted that a mega-signing is on its way this summer, and MARCA English readers are hoping it is Eden Hazard.

With 27% of the vote, the Belgian playmaker is the fan favourite, and Zinedine Zidane is also quite adamant on signing him as he has been after him for quite some time now.

In the Spanish version of the poll, it was in fact Dybala that emerged victorious with 26% of the vote, with Hazard a distant third at 14%.

Netherlands coach Danny Blind was sacked on Sunday, less than 24 hours after a 2-0 defeat away to Bulgaria left the team floundering in fourth place in World Cup qualifying Group A.

The Dutch FA (KNVB) announced the decision in a statement after Blind, had been called in for crisis talks.

The 55-year-old had questioned his own future following Saturday's loss in Sofia, which left the Dutch six points off the pace at the halfway stage of the European qualifying campaign for the 2018 finals in Russia.

But Blind bemoaned the decision in a statement on Sunday.

"We were on the right track but the Bulgaria loss was a setback. I gave everything I had and I'm really sorry that it ends this way," said the former Netherlands defender.

The national team has been in the doldrums since missing out on the 2016 European Championship in a dramatic fall from grace two years after finishing third at the World Cup in Brazil.

The defeat by Bulgaria leaves the Dutch facing a tough struggle to finish in one of the top two qualifying places in Group A. They have seven points from five matches and trail leaders France (13 points), Sweden (10) and Bulgaria (9).

"We have respect for what Danny meant to us and the team during his tenure. But because the results were not forthcoming, and because qualification for Russia has gone poorly so far, we felt the need to take our leave of him," said KNVB director Jean Paul Decossaux.

Blind was appointed on July 1 to replace Guus Hiddink after a poor start in the Euro 2016 qualifiers but a home loss to Iceland in his first game in charge exacerbated the situation.

The Dutch have struggled to find any consistency during his 20-month tenure, winning seven and losing seven of 17 games.

Netherlands assistant coach Fred Grim will stand in as caretaker for Tuesday's friendly against Italy in Amsterdam while the KNVB start to look for a new manager.

Poland surge clear at the top after win in Montenegro

Poland won 2-1 in Montenegro with goals from Robert Lewandowski and Lukasz Piszczek to move six points clear at the top of World Cup qualifying Group E after a pulsating clash on Sunday.

The result left the Poles in charge midway through the campaign on 13 points from five games, six ahead of closest rivals Montenegro and Denmark, who were held 0-0 in Romania.

Lewandowski curled home a superb 40th-minute free kick and, although Stefan Mugosa equalised just past the hour, Piszczek got the winner with a fine lob in the 82nd after the Poles missed a barrage of chances against their injury-hit opponents.

The visitors had come close three times in the opening half before Lewandowski netted his eighth goal of the qualifying campaign, leaving goalkeeper Mladen Bozovic rooted to his line with a delightful strike from 25 metres.

Lewandowski and Piszczek missed a pair of easy chances inside a minute on the hour and Poland were swiftly punished as Mugosa scored his first international goal with a thumping header after Damir Kojasevic's teasing cross from the right.

Poland pressed for a winner and right back Piszczek made amends for his earlier miss as he brilliantly side-footed the ball over Bozovic from inside the penalty area to silence a vociferous home crowd in the Adriatic nation's capital.

Jermain Defoe hopes his scoring return for England on Sunday can start a new international chapter in his career.

The 34-year-old marked his 56th cap with a typically astute strike after 21 minutes against Lithuania in their Group F World Cup qualifier, fully justifying his return after an absence of three-and-a-half years.

Defoe has scored 14 Premier League goals for a Sunderland side nailed to the foot of the table virtually all season and showed on Sunday that he has lost none of his sharpness.

England's next match is against Scotland in June and providing he stays fit it seems likely Defoe will again be part of Gareth Southgate's plans with the manager hinting that next year's World Cup is also a possibility.

"Obviously I've got to go back to my club and make sure we finish the season strong," said Defoe, who made his England debut in 2004 but was overlooked for the 2014 World Cup after joining MLS outfit Toronto.

"I'll keep my head down and see what happens."

"Yeah it's good to be back. Just to win the game was important and we did that. It's hard to put in words really to be back," added Defoe who walked on to the pitch holding the hand of terminally ill young fan Bradley Lowery with whom he has struck up a friendship since learning of his plight.

With captain Wayne Rooney's international days looking numbered after he failed to make the squad, and a lack of regular English scorers in the Premier League other than the currently injured Harry Kane and Leicester City's Jamie Vardy, Defoe's renaissance is something of a bonus for Southgate.

Asked if Defoe was a realistic option for next year's World Cup finals, when he will be 35, Southgate offered the former West Ham United and Tottenham Hotspur player room for optimism.

"We've got to look every time we get together as to who's in form," Southgate said. "I don't know if we can have a pecking order because players that are playing well deserve that opportunity. We've got to have that competition for places.

"The reality is that you will always lose players to injury and it's really important that we are able to call upon the likes of Jermain. If he's scoring goals in the Premier League and playing as well as he has this season, there's absolutely no reason why he couldn't (go to the World Cup)."

Griezmann is in the form of his life

The 26-year-old is literally in the form of his life, with Atletico Madrid and France reaping the rewards.

By converting from the spot against Luxembourg on Saturday evening, the forward took his goals tally for 2017 up to 14, which means that this will be the best quarter of a year in his whole career, whether or not he adds another goal in Tuesday's friendly against Spain.

On only four other occasions has he reached double figures over one quarter of a year, but never before had he netted more than the dozen goals of October, November and December 2013 or of January, February and March 2016.

Having scored 14 times in the 20 games he's played so far this calendar year, it is becoming more surprising when Griezmann doesn't score than when he does, while his impact is not limited to putting the ball in the net.

He has also provided five assists so far in 2017, while consistently linking up well with Kevin Gameiro at the tip of Atletico Madrid's attack.

While Lionel Messi and Cristiano Ronaldo may still remain ahead of Griezmann when it comes to determining the best player in the world, the Frenchman's career-best form means he is closing in on the crown they have shared since 2008 and has an excellent chance of becoming the first non-Messi-or-Ronaldo player to retain their place on the Ballon d'Or podium since Xavi finished third in 2009, in 2010 and in 2011.

For fans of Atletico Madrid, they'll hope his super form can continue all the way to the Champions League final in Cardiff.