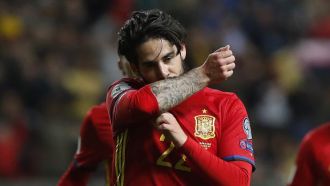 Saturday, 25 March 2017
It was a comfortable evening on the pitch for Spain as they ran out 4-1 winners over Israel however Isco cut a frustrated figure in the mixed zone as he bemoaned media outlets 'inventing' stories about him whilst there is a break in domestic football.

The 24-year-old enjoyed a fine evening on the pitch as he found the net after being used as a second-half substitute.

Real Madrid's playmaker has been the subject of speculation linking him to Barcelona in recent days however he was quick to quash such rumours.

"Players are aware of rumours, we are used to it, now that there is less football during the break some people have to invent stories," he explained.

It hasn't been the most comfortable season at the Estadio Santiago Bernabeu for the former Malaga midfielder however he retains the faith of international coach Julen Lopetegui, something he made clear his appreciation for.

"I'm happy to be here with the national team because of the confidence the coach has in me," he added. "We had a good game, we managed to stay on top and the group worked phenomenally."

Competition for places is nothing new within the La Roja setup and Isco fully understands this with the playmaker eager to make clear the team's success is the most important thing.

"It is a luxury for me to be here," he continued. "There is a lot of competition with many players who do well for their club teams, I am here to help in any way that I can and I am happy about how things are going."

Opining on everything from the French presidential elections to Manchester City's tie against Monaco, not to mention sex, Cantona has never been one to shy away from making the loudest, most provactive statements.

"Don't have sexual relationships when watching football because you might miss something," he also joked.

The ex-Manchester United striker made fun of the Oscars mishap and showed some excellent editing skills of his own in the making of the video.

That date is three days before the "Clasico" between Barca and Real Madrid which could go a long way to deciding this season's La Liga title.

Argentine Messi, five-times world player of the year, was found guilty by a Barcelona court last July on three counts of tax fraud between 2007 and 2009, resulting in a suspended 21-month prison sentence and fine of 2 million euros.

Messi's father Jorge was given the same sentence and ordered to pay a fine of 1.5 million euros.

Spanish law is such that any sentence under two years for a non-violent crime rarely requires a defendant without previous convictions to serve jail time.

Messi, 29, and his father defrauded the Spanish tax office of almost 4.2 million euros from 2007-09 by using a web of shell companies to avoid taxes on income from the player's image rights.

Messi is top scorer in La Liga this season and has netted more goals than any player in matches between Barcelona and their arch-rivals Real Madrid.

Real lead the Catalans by two points at the top of the league standings and have a game in hand.

The waters had appeared to be calming around Karim Benzema's international future but Didier Deschamps refused to discuss why he didn't call up the forward for the latest set of games.

Luxembourg and Spain are on the agenda for the former Marseille midfielder, who dismissed queries over Benzema's absence on Friday.

"I have nothing to say today, for the simple reason that my focus is the match tomorrow and then on Tuesday," the coach told reporters.

"The coaching staff and 24 players that are with us at the moment are my priority."

Beforehand, the Real Madrid striker had addressed an old interview he gave to MARCA, removing any doubt over his opinion of Deschamps as a potential racist.

"I never called Deschamps a racist," he said. "I don't regret what I said because it is true."

Griezmann jokes that Mbappe will keep him out the France team

Kylian Mbappe's rise to the French national side may keep one or two regulars out of the line-up, as Antoine Griezmann remarked on Friday.

Les Bleus take on minnows Luxembourg on Saturday before a friendly with Spain and the Monaco youngster is hopeful of making his debut for the senior side after an array of impressive showings at club level.

"Yeah Dimi," wrote Griezmann on Instagram to caption a photo of himself and Dimitri Payet watching Mbappe. "Here's the guy that will keep us on the bench!"

Jorge Andrade: Pepe should finish his career with Real Madrid

A potential option to stay at Real Madrid is the best for defender Pepe, according to former Portugal international Jorge Andrade.

Both players were at Porto after the turn of the century and Andrade, who also played for Deportivo and Juventus, believes that his countryman is too good to play in the Far East.

"I do not know if he will go to China, if I were him, I would definitely finish my career in Madrid," the ex-defender told MARCA.

"If that can not happen, then I'm not sure China will be the best destination.

"He's still one of the best around, he can command a defence and deserves to finish his career in the best way."

Andrade also recalled his exploits with Portugal's national team, where he was part of the side to finish as runners-up at Euro 2004.

"Now that was a team built around a star, Cristiano Ronaldo," he added. "And they managed to win it [in 2016] without him on the pitch!"

A booking picked up whilst on international duty for Argentina means Javier Mascherano is to return back to Barcelona training early.

The defender was yellow carded during Argentina's 1-0 victory over Chile, in Thursday night's clash which saw Lionel Messi score the only goal from the penalty spot.

This now means Mascherano cannot feature in Tuesday night's away match against Bolivia, in La Paz.

Barcelona face Granada away from home on Sunday, April 2, another important match for Luis Enrique's side in the title race, which the ex-Liverpool man should now have additional time to prepare for.