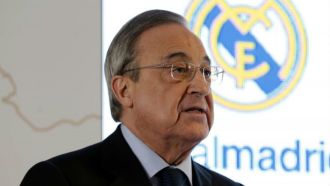 Perez: A Mbappe-Benzema strike partnership? Anything is possible

Friday, 24 March 2017
Two French strikers have dominated the recent headlines discussing Real Madrid, as interest intensifies in Monaco's Kylian Mbappe, whereas Karim Benzema has once again questioned his lack of a first team call-up with France this international break.

Real president Florentino Perez has hinted at a galactico signing and many Madridistas are hoping Mbappe is it, which could mean an incredible French partnership that has not yet been seen at the national level.

"A Mbappe-Benzema striker partnership? Anything is possble," said Perez in an interview alongside Benzema. "Benzema is the best player - and No. 9- in France, I can't say any more.

As for Mbappe, the Real boss didn't want to further fuel the fires and dive deeper into the possibility.

"I only talk about Real Madrid players," he stated. "But he [Mbappe] is very good, although right now the focus for Real Madrid is the Champions League and LaLiga."

Perez also took the chance to hit out at those critics who contend Benzema only plays because he is the president's darling.

Demanding an explanation for why he continues to be snubbed in terms of a French national team call-up, Karim Benzema doesn't regret the comments he made towards coach Didier Deschamps.

Breaking his silence on the matter since a controversial MARCA interview, the striker still hopes to return to Les Bleus.

"I never called Deschamps a racist," Benzema said. "I don't regret what I said because it is true.

"It is a very difficult situation for a footballer, especially when you play for a club as big as Real Madrid.

"With France, the matches are high quality, and to play with the national team is a source of pride - when I'm not called up, I'm sad because I love football."

In the striker's eyes, the Valbuena case controversy shouldn't continue to keep him out of the team because he has already paid his dues.

"I find it unfair and demand an explanation as to why I am not called up," he continued. "If it is because of the Valbuena case, I paid up and am not guilty.

"Every morning I wake up and ask the same question."

Varane: If Benzema has been Real Madrid's No. 9 for this long, there's a reason

A teammate of Karim Benzema's for club and country, at one point, Raphael Varane has praised the French striker, as he has his fair share of critics in the Spanish capital and throughout France.

It takes a certain type of character and quality to lead the Real Madrid front line and what matters to Varane is that Benzema is appreciated within the dressing room, regardless of what is being said outside of the team.

"If Benzema has been Real Madrid's No. 9 for so long, there's a good reason for it," Varane stated. "Karim [Benzema] is very well liked within the dressing room and gets along well with everybody.

"He plays in a very difficult position at Real Madrid because when you don't score..."

Central to the criticism headed his way is questions about his character, accusations that Varane believes miss the point.

"He's a bit shy but very professional," the centre-back concluded. "He has a special ability to handle the pressure."

Iniesta: Isco is an incredible footballer

After a difficult injury ridden season, Andres Iniesta is once again enjoying his football at the moment and had some kind words for club rival but national teammate Isco.

The Real Madrid midfielder had been linked to the Catalan club recently, but Iniesta sees little reason for the ex-Malaga man to leave given he is already at a club of Real Madrid's stature.

"Isco is an incredible footballer and plays for one of the best teams in the world," Iniesta said in his press conference ahead of Friday's World Cup Qualifier against Israel. "I have spoken about him a lot of times and the quality he has.

"He is an important player."

As for his campaign with the Blaugrana, the midfielder is ready for what is left of the season, putting his injury fully behind him.

"It has been a very difficult season thus far," Iniesta concluded. "Because of muscular injuries, it hasn't gone as I had planned.

"Now I'm back to feeling good and happy, so hopefully there aren't any more setbacks.

"I am ready to help the national team with the important matches we have ahead."

Much of the discussion about Barcelona's 3-4-3 system has been surrounding the removal of the problematic right-back position but the security offered by Jordi Alba has also been lost.

With the former Valencia man unable to oust Neymar at left-wing and not desired by Luis Enrique to play at centre-back, he has spent more time on the bench in recent weeks.

"I'm not participating as much as I like," admitted Alba as he began Spain duty, where he'll be deployed in his familiar role.

Other left-backs who have been found between a rock and a hard place as Barcelona consider a three-man defence include Juan Carlos Rodriguez and Sergi Barjuan, who were both part of the squad in the early 1990s.

"[Alba] is the best player to pen back the opposition," said Rodriguez, praising the defender's speed. "Just as I did and now [Javier] Mascherano is also expected to do, he wins the ball high up the pitch and sends it forward."

As for Barjuan who was typically a more attacking defender than his ex-teammate, he discussed how he felt 'safer' in a team with a four-man defence but expects the current Blaugrana man to adapt.

"Footballers these days have to evolve on a daily basis, and if Jordi is unhappy he has to ask questions and not look for excuses," stated the former Spain international.

Real Madrid's summer transfer business will depend on what position Cristiano Ronaldo expects to play in the foreseeable future, whether that's a move into a centre-forward role or remaining on the left flank.

The club's hierarchy remain pleased with the Portuguese player's performances and are grateful for what he adds to the team, but they want to clear up where exactly he'll be contributing.

While many believe he would make a good No. 9 due to his finishing ability, the player himself has been resisting such a change and has been playing well from his usual wide position in recent weeks.

Once the 31-year-old commits to one position or another, Los Blancos will correspondingly turn to the transfer market in what could be a busy summer at the Estadio Santiago Bernabeu.

Not only are significant arrivals expected, but some members of the current squad may have to make way, such as Mariano Diaz, who has been struggling for minutes.

For Zinedine Zidane, a priority is that no toxic elements are introduced into what is a harmonious squad, with the positive atmosphere preferable to a star who would shake up the pecking order.

Given that Zidane has president Florentino Perez's ear, the Frenchman should have a major influence in the transfer decisions once he has analysed his squad in detail and once the position of Ronaldo becomes clearer.

Former German soccer great Franz Beckenbauer was questioned by Swiss prosecutors on Thursday as part of their investigation into his country's successful bid for the 2006 World Cup.

The OAG confirmed in a statement to Reuters that "Franz Beckenbauer has today been interrogated by federal prosecutors of the Confederation... in Berne" adding that the 71-year-old had been "cooperative."

Beckenbauer has previously admitted to making mistakes but has denied wrongdoing.

Widely regarded as one of the game's finest players, he captained the West Germany team that won the 1974 World Cup and was coach when they won again in 1990.

The German football federation's own report into alleged irregularities over the awarding of the 2006 World Cup was published in March last year.

It said that, while there was no evidence of Germany paying FIFA members in return for votes, payments were made to at least one former FIFA official through a web of accounts involving several other firms or individuals, including Beckenbauer.

"I only talk about Real Madrid players," he stated. "But he [Mbappe] is very good, although right now the focus for Real Madrid is the Champions League and LaLiga."

Perez also took the chance to hit out at those critics who contend Benzema only plays because he is the president's darling.

"He plays because of his own merits, because of his exemplary attitude, not because of me," he clarified.
Email : [email protected]
Προηγούμενο : Jardim: Mbappe isn't surprising me one bit | Επόμενο : Isco hits out at 'invented' Barcelona rumours
Προβολές : 367
- 2948 προηγούμενη ημέρα