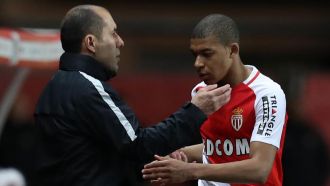 Thursday, 23 March 2017
Monaco's 18-year-old sensation Kylian Mbappe is a player on everybody's minds, and it seems that his breakthrough season has caught everyone by surprise except his coach Leonardo Jardim.

For some time now, the Portuguese coach has known of his talents, especially after seeing him train since the age of 17.

"Mbappe isn't surprising me one bit," he said. "I went after him when he was 17 and saw him train everyday.

"I knew he had it immediately. This is his second year with us and we know that he has a lot of quality and a spectacular future."

The market may come calling, a possibility that seems inevitable at this point as Europe's top clubs have started to follow Mbappe's every move.

"We are aware of what we have on our hands," Jardim said. "Monaco have a well defined sporting project and we know we'll have to face several exits, but we must continue on with our work."

Real Madrid and Barcelona are amongst the many European clubs after the French forward.

In their second session during the international break, Zinedine Zidane has opted to do some fitness exercises on the training ramp that connects several Valdebebas pitches.

Carlo Ancelotti and his fitness director Giovani Mauri were often using this part of the facilities when ensuring the team remained in top shape, although Mauri was eventually criticised.

Current fitness coach Antonio Pintus has been far better received than his predecessor, as the team lost a physical edge and collapsed in a way that cost Carletto his job according to many pundits.

The Spanish FA's Competition Committee has forgotten to include Lionel Messi's booking against Valencia in its weekly summary of yellow and red cards.

Given that the booking was the fifth of the Argentine's season, he was due to serve a yellow card accumulation suspension in Barcelona's next match against Granada, but it is now unclear if he will be eligible or not.

His warning for timewasting in the 86th minute of the Blaugrana's 4-2 victory over Valencia was indeed included in the referee's report, but was overlooked in the Competition Committee's summary.

It had been suggested that the suspension was convenient for Messi and Barcelona given Granada's lowly league position and the fact it means he'll definitely be available for the following match against Sevilla, but it is expected that the omission from the week's report will be rectified at some point on Thursday.

Vitolo: Who wouldn't want to play for a big team like Barcelona? It would be nice

One of LaLiga's in-form players this season has been Sevilla winger Vitolo Machin and that has led to him becoming a regular in Julen Lopetegui's Spain team, as he's even attracting interest from Barcelona too.

Since moving to Sevilla in 2013, the winger has improved leaps and bounds and is now open to moving to one of the biggest teams in Spain, should the opportunity arise.

"Who would not want to play for one of Spain's biggest teams?" Vitolo told MARCA after being asked about Barcelona's potential interest.

"It would be nice - they are always linked with a lot of names and you don't know what's going to happen.

"I am calm because I am very comfortable at Sevilla; they treat me very well and I am happy here."

Vitolo has become a regular in the national team side since Lopetegui took over and it is not something that the Las Palmas-born player takes for granted.

"I am very happy to continue getting recognition from the coach," he continued.

"It means that I am doing things well for my club and I am grateful to the coach for calling me up."

It was Vicente Del Bosque who gave the 27-year-old his debut with the national team - not Lopetegui - and Vitolo does not see much of a change.

"I don't see a lot of difference between the two," he followed on.

"There are a lot of players in the squad that were already there and the new coach has brought in some new players to rejuvenate the team, players who have always dreamed of wearing the national team's colours.

"You have to be happy because everybody has been given an opportunity."

Roque Mesa and Jonathan Viera, who both play for Vitolo's first club Las Palmas, have been close to call-ups for the national team, and he hopes to see them in the squad in the future.

"Personally, I believe that Roque Mesa and Jonathan Viera have the quality to play for the national team," he said.

"But as the coach has said, there are a lot of talented players in their positions and it is difficult to be called up as it is the best players here.

"Having said that, they are having a great season with Las Palmas and have the quality to play with Spain.

"I have not been able to talk to them about this but I imagine they have the same dream of wearing the national team shirt as I once did, and hopefully another Canary Island player can come into the squad."

With the World Cup in 2018, where Vitolo will be 28, he has made it his dream to reach the tournament after missing out on the squad for Euro 2016.

"I would like to go to the World Cup," he stated.

"It is true that there are a lot of games to go and you don't know what will happen, but you always have the desire of playing in such an important tournament with your national team."

Deulofeu: Barcelona? If I didn't think in the present, I'd lose my mind

Apromising start to life at AC Milan has Gerard Deulofeu's former club Barcelona wondering whether they'd be able to recapture his services if the opportunity presented itself, although the winger is not considering the possbility.

A mainstay of the U23 side, Deulofeu is happy to have graduated from La Rojita to the senior national side.

"Barclona interest? If I don't think in the present, I'd lose my mind," Deulofeu said. "In football, I've learned to forget the past and the future will come as it may.

"Right now I'm only thinking about Milan and the Spanish national team."

His growth and development may be the reason the La Masia graduate has impressed his ex-club, as he is a far more intelligent player than when he started.

"I'm very happy here in Milan and hope to continue here," he added. "They gave me a lot of confidence when I arrived.

"I'm a more intelligent and consistent player that is now preparing matches much better beyond training."

This newfound consistency is why Julen Lopetegui has entrusted Deulofeu with a call-up.

"Because, I'm more intelligent on the pitch, I've found the consistency Lopetegui and I were after," he reaffirmed. "It was a big surprise to get the call and it makes me very proud to be with the national team.

Roma may be in the race to sign lure Monchi away from Sevilla but the Serie A club have attacking legend Francesco Totti lined up for the sporting director's role should the Spaniard turn down their advances.

The Giallorossi, who are currently in second place but eight points behind Juventus, have high hopes of challenging the Bianconeri for the title next season and beyond.

As such, the club believe the highly-rated Monchi, who has proven his credentials in a similar role at Sevilla, would be a perfect fit for the job.

However, Roma have identified Totti as a back-up option for the Spaniard with the club's president James Pallotta insisting that the forward's future is as sporting director of the Lupi.

Still, with reports linking Paris Saint-Germain coach Unai Emery to the top job at the Stadio Olimpico next season, Roma hope the former Sevilla's coach's potential arrival will be enough to tempt Monchi into joining the club.

The expected renewal of Miguel Angel Moya at Atletico Madrid has been confirmed by the club, keeping the goalkeeper at Los Colchoneros until June 2018.

Signing for three million euros in 2014, the 32-year-old left Getafe and enjoyed instant success at the Estadio Vicente Calderon by lifting the Supercopa de Espana, going on to hold the No. 1 jersey for large parts of that season.

"I'm happy because I am where I want to be," Moya said after the announcement was made.

"It is great news for the club," he said. "[Moya] has been vital to the team, he is an excellent teammate and a very important player for the club."
Email : [email protected]
Προηγούμενο : PSG preparing 80 million Mbappe bid | Επόμενο : Perez: A Mbappe-Benzema strike partnership? Anything is possible
Προβολές : 362
- 2875 προηγούμενη ημέρα