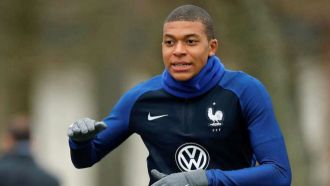 Wednesday, 22 March 2017
On the heels of his first France call-up, Kylian Mbappe is undeniably one of the players of the moment, as he can't seem to stop scoring goals and has led a Monaco side into the Champions League quarter-finals and top of the Ligue 1 table.

Currently preparing for the matches against Luxembourg and Spain, Mbappe is on all of Europe's top team's minds.

In fact, PSG is preparing an 80 million bid for the striker, according to Le Parisien.

The 18-year-old often compared to Thierry Henry has two years left on his contract and Monaco aren't intent on letting him go to a domestic rival, which means he could end up leaving elsewhere.

Real Madrid are also reportedly interested in the forward.

The summer of 2017 is set to put Real Madrid through a number of high profile challenges as Zinedine Zidane comes up against Jose Mourinho, Pep Guardiola, and Barcelona.

A pre-season tour of North America will once again be on the agenda for Los Blancos, including an eight-day sojourn to California where Manchester United await in San Francisco on July 23.

That friendly will pit Mourinho against his old employers, with Florentino Perez, Luka Modric, and Raphael Varane still on positive terms with the coach although the same cannot be said for Cristiano Ronaldo and Karim Benzema.

Furthermore, the presence of David De Gea, on United's books for now, will add a little extra needle to an otherwise friendly International Champions Cup fixture.

Manchester City are up next on July 26 in Los Angeles, lining Pep Guardiola's side up against Real for a Clasico reunion of sorts.

The main event will then take place in Miami three days later, pitching Barcelona against their Madrid rivals for the culmination of a three-day event that organisers are hoping to turn into a summer Superbowl.

To round off the pre-season duties, Real are expected to confirm an exhibition match against Liverpool as well as an MLS All-Star game on August 2, in Chicago.

Barcelona will meet Real Madrid in Miami as part of their tour of North America during the upcoming off-season and the Catalans now have two other matches penned in for their trip.

Rounding off their International Champions Cup duties, Barcelona take to Miami on July 29 for a Clasico with tickets already going for thousands of dollars.

The already incredible story of Gianluigi Buffon will hit another high this weekend when the goalkeeper makes the 1,000th appearance of his career.

On Friday, the Juventus stalwart will celebrate that milestone when he takes to the field for his country against Albania.

In doing so, it will be a double celebration for Buffon who will surpass Iker Casillas by collecting the most amount of caps for any European player by reaching 167 appearances for his country.

Buffon's CV is an impressive one. He has featured in five World Cups, beginning in 1998 and looks certain to play in six if the Azzurri reach Russia in 2018, as they seem set to do.

It doesn't end there either. No goalkeeper in Serie A history has had a longer streak without conceding a goal when he surpassed Sebastiano Rossi's record to go 973 consecutive minutes without being beaten.

He also surpassed Dino Zoff en route to that record, another Juventus legend between the posts, who managed 70 minutes less than the current Bianconeri captain.

Buffon first featured in Serie A as a teenager with Parma, playing against AC Milan on November 19, 1995.

"I told him just to quietly go about his business and focus on the game," said Nevio Scala's goalkeeping coach Ermes Fulgoni, who was confident in the 17-year-old's ability despite coming up against a Milan side featuring attacking talents like George Weah, Zvonimir Boban and Roberto Baggio.

"When they announced the line-up in the stadium over the public address system, I told the people who were around me, 'don't worry, we aren't going to concede any goals today'."

That proved to be the case as the game ended 0-0 and Buffon started his career with a clean sheet, which would soon become a regular occurrence.

He enjoyed a successful time of it with Parma, winning a UEFA Cup before departing to join Juventus in 2001, and he surely couldn't have imagined that 16 years later he would still be setting records in Turin.

That happened last weekend away to Sampdoria when, during the 65th minute of the game, Buffon reached a total of 39,706 minutes on the field with the Old Lady, passing the previous record set by Giampiero Boniperti, a club legend.

Although he is now 39, Buffon shows very little signs of slowing down or deteriorating and has no desire to hang up his gloves.

He still wants to continue, he wants to play and wants to set more records and he has time left to do so.

Germany's Lukas Podolski will receive an appropriate farewell when the world champions meet England in a high-quality friendly on Wednesday with the winger having become one of the country's all-time greats, coach Joachim Loew said on Tuesday.

The game is expected to provide a perfect stage with Podolski, who is hugely popular among German fans, set to earn his 130th and final cap and start as captain for the first time.

Germany will be missing several players through injury with Loew looking towards Sunday's Group C World Cup qualifier in Azerbaijan with his side top after four straight wins.

The 31-year-old Podolski, who made his debut back in 2004, is his country's third most-capped player and is also fourth in the all-time scorers' list with 48 goals.

"He is a unique specimen, no one can really replace him," Loew told reporters. "For me it will be a beautiful moment but a sad one because he was one of the greatest players ever to come out of Germany.

"Lukas and myself have gone a long road together," said Loew, who has coached Podolski for all of his 13 years with the national team as assistant coach and then head coach since 2006.

"We have gone over many hurdles, many tournaments, disappointments but also the biggest joy as coach and player with the World Cup victory in 2014. So the stage tomorrow is appropriate. Germany against England is the right atmosphere."

The speedy winger, known as much for his powerful left foot as his jovial character, will continue in club football as he prepares to leave Turkey's Galatasaray at the end of the season to join Japan's Vissel Kobe in the J1 League.

"These 13 years were great and fun years and I am proud of them," said Podolski, who was part of a talented generation of Germany players, including Bastian Schweinsteiger and Philipp Lahm, that emerged after 2004.

Asked by English reporters what made Germany so successful over the years, Podolski, who also played for Arsenal, Bayern Munich and Inter Milan among others, said it may have been sticking with the same coach over a decade.

"Maybe the main reason is that we have a good coach for more than ten years and after 2004 we started a road which maybe other nations did not start," he said.

England have had six coaches over the same period.

"What happens in England at youth level I don't know. But the players are getting stronger... and if they do not face Germany in a tournament maybe they can progress," he said with a laugh.

Germany will be without injured midfielder Mesut Ozil, winger Julian Draxler and forward Mario Gomez when they host England in a friendly international on Wednesday, coach Joachim Low said.

Low said the trio were nursing minor injuries and would need a few days to recover with the world champions taking on Azerbaijan in a World Cup qualifier in Baku on Sunday.

"Those who will not play tomorrow are Ozil, who has some muscle problems. Julian Draxler has the same injury, an upper thigh muscle," Low said on Tuesday.

"Mario Gomez has an adductor muscle injury and may need a few days."

Gomez's absence is especially disappointing with the striker having netted in his last three Bundesliga games for VfL Wolfsburg and appearing to have rediscovered his form.

Germany are already without injured keeper Manuel Neuer, with Low having called up Kevin Trapp as a replacement.
Email : [email protected]
Προηγούμενο : Benzema set to stay at Real Madrid for many years | Επόμενο : Jardim: Mbappe isn't surprising me one bit
Προβολές : 364
- 2874 προηγούμενη ημέρα