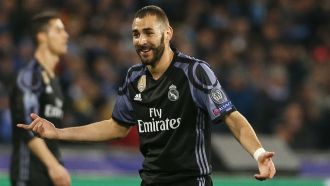 Benzema set to stay at Real Madrid for many years

The forward was vital in last weekend's 2-1 victory over Athletic Club, while he also scored a brace against Eibar on Los Blancos' previous Basque outing two weeks earlier.

"He is going to be with us for many years," is a phrase that has often been heard at the Estadio Santiago Bernabeu and such an extension would keep both parties happy.

Benzema is content in the Spanish capital and feels like he has more support from his club than from his country, while he is now Real Madrid's eighth highest goalscorer with 177 goals, just five fewer than Paco Gento.

Curiously, the Frenchman is a player who receives plenty of praise from his teammates, while he is sometimes criticised by fans, usually for the chances he misses.

Yet his link up play at the tip of Los Blancos' attack has always been essential and he would be a major loss for Zidane if he were to depart.

With the French coach and with Perez both keen for the 29-year-old to stay, it would be a shock if Benzema is not in the squad for next season and beyond.

Ramos: Pique and I like to throw stones at each other but now we'll embrace

Although the pair are opponents and enemies at club level for much of the year, Real Madrid captain Sergio Ramos insisted that there have never been any hard feelings between himself and Gerard Pique.

Both men are symbols of their respective clubs and as such, tensions can rise at times between them during the course of the season.

But when they team up for Spain duty, as they will this week, Ramos claimed that there is no animosity between the duo.

"Pique and I like to throw some stones at each other but now when I see him I will give him a big hug," Ramos said upon his arrival at Las Rozas for international duty.

"That is just the nature of the morbidity that exists in the relationship between Real Madrid and Barcelona."

Although the 30-year-old has now reached double figures in goals for the season, Ramos did struggle to explain why he has been so prolific in the opposing penalty area.

"I certainly didn't expect to score so many goals," he added. "My priority is always to defend first and foremost because I'm a defender."

Mourinho: Maybe I should be smart and go to a country where a kitman can win the title

Leagues where 'the kitman can coach a team to the title' are not worth their salt in the eyes of Jose Mourinho.

While not specifically naming Pep Guardiola or Bayern Munich, the Manchester United boss joked that he'd not been wise to take on tough challenges in countries such as Italy and England.

"For me, I'm not the smartest guy to choose countries and clubs," the coach told an interview with France Football. "I could choose another club in another country where becoming the champion is easier.

"Maybe in the future I have to be smarter and choose another club in another country where everybody is champion. Maybe I will go to a country where a kitman can be coach and win the title."

In comparing the Premier League and Bundesliga title races, the Portuguese tactician was adamant that the number of different competitors in England makes it the toughest place to coach.

"In England, clubs are so economically powerful that the market is open to all," added Mourinho. "Take the example of Bayern in Germany.

"You know when they start winning the title every year? The summer before, they buy the best player of Borussia Dortmund. [Mario] Gotze, then [Robert] Lewandowski the following year, then [Mats] Hummels last year.

"Me, I arrive at a club that has a great and prestigious history, but that can no longer be declined in the same way.

"No club in England, whether it's Manchester United, Liverpool, Manchester City can no longer be dominant permanently. Power has divided."

Mourinho, 54, also discussed how he felt he'd matured since his firebrand persona days at the likes of Chelsea and Real Madrid, reflecting on his new found ability to switch off from the game.

"Mourinho the man tries to be the opposite of the manager," the United coach noted. "He tries to be discreet, calm; find the way to disconnect.

"I can go home and not watch a football game, not think football. I can do it. At the beginning of my career, I could not. I was constantly connected, 24 hours a day.

"I had to find a form of maturity. Today, I feel good with my personality as a man. I have matured, I am more peaceful. A victory no longer represents the moon and a defeat no longer means hell.

"I believe that I am able to transmit this serenity to those who work with me, to my players. I have the same ambitions as before.

"The same involvement, the same professionalism, but I'm more in control of my emotions."

Griezmann: Right now I don't see myself at Real Madrid or Barcelona... but why not?

A move to either Real Madrid or Barcelona for Antoine Griezmann would be one of the biggest in living memory, and while the Frenchman has maintained his commitment to Atletico Madrid for now, he's open to the possibility of a jump to their LaLiga rivals in the future.

The mercurial forward has been linked with Manchester United since last summer and yet looks set to stave off any further interest for the time being.

"I have no intention of leaving Atletico Madrid, for Paris Saint-Germain, China, the USA, Russia, or elsewhere," said Griezmann to L'Equipe, who asked him about a possible move to Real or Barcelona.

"Why not? That's the dream for every player; to be at big clubs like that, or Bayern Munich.

"But right now I don't see myself at Barcelona or Real, or anywhere else. I'm happy in Spain."

With regard to Griezmann's future, the 25-year-old considered if Diego Simeone's stay at Atletico was in any way linked to his own commitment to the club.

"No, it's not," he replied. "He will leave one day, and in the summer I called him up to check if he was going to stay on. He told me of his plans for the season, that he wanted me to stay, and that made me feel happy.

"But we're not inseparable."

Finally, the Colchoneros talisman admitted that he'd retire a happy man if he claimed football's most prestigious team honours over any individual accolade.

"[Individual honours] are important, and it's difficult to win something over [Lionel] Messi or [Cristiano] Ronaldo," said Griezmann.

"I'd prefer to win a World Cup or European Championship over a Ballon d'Or."

Emery: PSG's 6-1 loss to Barcelona was an accident

The pain of squandering a four-goal advantage against Barcelona is still raw for Paris Saint-Germain coach Unai Emery, but the Basque has insisted that the French side's response has shown the Camp Nou collapse to have been a fluke.

PSG won the two Ligue 1 matches before that Champions League loss and have now won their two matches since, defeating Lorient and Olympique Lyonnais by 2-1 scorelines.

"We will remember [the 6-1 defeat] all season, but we proved it was an accident," he said after the Lyon victory.

"If we take into account the 19 games since the winter break, the team won 16 matches, had two draws and lost against Barcelona."

Emery hopes that some good can come from the Camp Nou nightmare, pointing to the fact that there were lessons to learn.

"I told the players that when you lose it is time to learn for the future," he said.

The Parisians take on Monaco in the final of the Coupe de la Ligue when they return from the international break.

Robert Fernandez: Messi and Iniesta will renew with Barcelona

The Camp Nou will be able to enjoy the talents of Lionel Messi and Andres Iniesta for several more years, according to Barcelona sporting director Robert Fernandez.

He reiterated his belief that the pair will renew their current deals, even if he did not give an exact timeframe for the signing of the new contracts.

"[Messi] will renew, as I've always said," he told Cadena Ser's 'Que t'hi jugues!' programme. "He is happy in Barcelona, he feels comfortable in the team and the environment is perfect.

"I don't have any doubt [that he'll sign a new deal]. Looking into his eyes I see that he is happy at Barcelona.

"I don't want to speak too much, though, as I know that there are many repercussions with this topic.

"[Iniesta] will also renew and he'll do it in his own time.

"I have no doubt that he'll renew and neither does he."

The other main topic for discussion was the search for Luis Enrique's replacement, with Fernandez answering questions on several of the candidates.

Discussing current assistant Juan Carlos Unzue, the director revealed that his chances do not depend on the current results and that the priority is that he suits the job's requirements.

"[Unzue] is someone who knows the club really well, including the system and the players, so he is prepared," Fernandez said.

"[Ernesto] Valverde has had several good seasons, not just at Athletic Club.

"It is not true that [Massimiliano Allegri] is coming."

Finally, he elaborated on the selection process, stressing that the current squad would not influence the club's decision.

"I have not spoken with the players about the new coach," said the Barcelona sporting director.

"People say a lot of things which are not true.

"I won't be consulting the players about the new coach."

Fernandez also took the time to praise the work of the outgoing Luis Enrique, while expressing his hope that the Asturian can leave on the back of a title or two.
Email : [email protected]
Προηγούμενο : Barcelona's Messi out on his own as Europe's top scorer | Επόμενο : PSG preparing 80 million Mbappe bid
Προβολές : 383
- 2940 προηγούμενη ημέρα