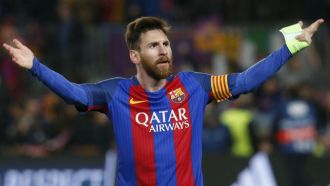 Barcelona's Messi out on his own as Europe's top scorer

Monday, 20 March 2017
Lionel Messi has raced ahead in the marksman stakes, his brace against Valencia placing him on 25 league goals and thus further clear in the race for both the Pichichi and European Golden Boot.

With each goal counting for two in the continental gong, he leaves Borussia Dortmund's Pierre Emerick Aubameyang trailing in his wake with a tally of 50 points to the Gabonese forward's 46.

Domestically the striker has opened up a comfortable lead from teammate Luis Suarez, who's netted 21 times; Real Madrid's Cristiano Ronaldo is some way behind on 19 strikes.

Messi's now sure to better his total from last season where he struck 26 times as Barcelona claimed the domestic double.

Luis Enrique: A clinical Barcelona would have been more comfortable

A two-goal margin wasn't enough for Luis Enrique on Sunday night after Barcelona grabbed a 4-2 victory over Valencia in an action packed match.

Lionel Messi and Andre Gomes netted in the second-half after the sides went in level thanks to Munir El Haddadi's calm finish stunning the Camp Nou crowd in first-half stoppage time.

"It was an entertaining game for all of us, with chances for both sides until the last minute," Luis Enrique told the press post-match.

"We played well, Valencia made us work but we generated many opportunities and taking them would have made for a more comfortable result.

"We have won three points against a difficult opponent."

In opening the scoring with a header from a corner, Eliaquim Mangala made it three goals conceded from the set play in two games for Barcelona, although the coach isn't overly worried by that statistic.

"It's football," Luis Enrique declared. "You find yourselves in a situation where you play 100 games without conceding from a corner and now, in a short time, we've let in three.

"Today it was down to the merits of our opponent.

"I know that some people are addicted to these statistics."

Lionel Messi continued his excellent scoring run on Sunday night, although the Argentine will now sit out the trip to Granada due to suspension with Luis Enrique detailing how tough the fixture list has been on his squad.

"[Messi] has broken every record and then broken them again, it's wonderful to be able to enjoy that," he said. "He is not available for every game and we will miss him when that comes around.

"It's impossible for any footballer to play nine games [in one month]. April will be terrible for all of us.

"I won't be giving any clues to [Juventus coach, Massimiliano] Allegri."

However, with a victory on Sunday, Manchester United moved above Arsenal and four points behind fourth-placed Liverpool.

"It was a big win because it keeps us alive in the race for fourth," he said after the game.

"If we didn't win this today we lost the chance in relation to the Arsenal defeat, as well as Manchester City playing Liverpool [which ended 1-1].

"But I prefer to win the Europa League because it gives us the same outcome, Champions League football, but also a trophy, prestige, and the UEFA Super Cup.

"But maybe we won't win it, so we have to fight until we can to try and finish fourth, which is what we did today, without many players."

The Portuguese boss digressed, pointing out the difficulty United faced in beating Middlesbrough.

"We changed a lot of players," Mourinho added. "We had to do that. We tried to protect the others with the way we played.

"We have no plan B, C, E, F and G but M, N, O, P and S. It is incredible to qualify for the Europa League quarter-finals and achieve this victory in the same week.

"We had a fantastic attitude and desire. It's a massive victory for us."

Atletico Madrid have cut the gap to third-placed Sevilla with a 3-1 home victory and Diego Simeone admitted that the result was extra satisfying given how well their opponent had been playing.

This victory was Los Colchoneros' first this season against a team in the top seven of the LaLiga table, making it especially rewarding.

"Sevilla had been putting together a magnificent season and had been praised by the press and by everyone," he said in his post-match press conference.

"This glorifies Atletico's performance even more.

"It makes sense that we're enthused by winning, by cutting the gap to Sevilla to two points and by gaining the head-to-head advantage, but we have to remain calm.

"[Sevilla] won't stop fighting and these [two] points are a lot, considering how few matches remain."

Asked how this match differed from the two teams' first meeting of the season, when the capital city side fell to a 1-0 defeat, Simeone pointed to the taking of chances.

"It's the fact that we scored a goal in the first half," he replied. "When they go in, matches unfold in a different way.

"We couldn't score in our first half in Seville, but we did in this match."

Furthermore, the Argentine believes that his team are playing better in general than they were when they travelled to the Estadio Sanchez Pizjuan in October.

"We have been improving since the start of 2017," he told those gathered in the press room.

"We are more balanced in matches and are defending better.

"This has been one of the toughest seasons since I've been at the club, with the injuries to [Jan] Oblak and [Augusto] Fernandez, with Tiago's failure to recover and with the moments when the team couldn't respond with consistency.

"In the face of all that, we reinvented ourselves.

"The team is improved, but 10 finals remain."

Finally, he also took the time to praise the support of the fans, who filled the Estadio Vicente Calderon on Father's Day.

"It didn't feel like a LaLiga match, but like a Champions League match," he suggested. "Not because of how the team played, but because of the atmosphere.

"All of the fathers who came with their children will have had a great day due to the happiness we gave them."

The international break means Simeone and Atletico are not back in action until April 1, when they pay a visit to Malaga.

Sampaoli: Sevilla lost because of a few details

Sevilla fell to a 3-1 defeat away at Atletico Madrid on Sunday afternoon, but Jorge Sampaoli was optimistic that his side could recover their form, pointing to his belief that the match came down to a few fine margins.

Four matches have come and gone without a win for the Andalusian club, with this result following their midweek Champions League exit, yet the Argentine coach warned against panicking.
Email : [email protected]
Προηγούμενο : Cristiano Ronaldo after substitution: Why me? F*** off | Επόμενο : Benzema set to stay at Real Madrid for many years
Προβολές : 441
- 2798 προηγούμενη ημέρα