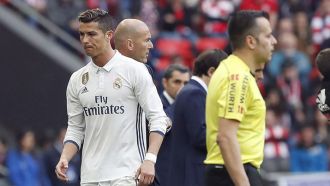 Cristiano Ronaldo after substitution: Why me? F*** off

Sunday, 19 March 2017
Although Los Blancos emerged from the Estadio San Mames with all three points, all was not well as Cristiano Ronaldo voiced his discontent upon being substituted.

Zinedine Zidane decided to take off the Real Madrid No. 7 roughly 10 minutes from time, as he looked to control the game and see out the result by introducing Isco.

"Why me? F*** off," Cristiano Ronaldo was caught saying, as shown on Gol TV.

It isn't the first time the Portuguese international was angered at being taken off this season, and this time the two eventually made up by shaking hands after the fact.

Zidane shows his flexibility in victory over Athletic Club

It has been an extraordinary 14 months for Zinedine Zidane since his appointment as Real Madrid coach and whilst critics of his style persist, the 44-year-old showed his flexibility in Saturday's vital victory over Athletic Club.

Just days ago the Frenchman was on the receiving end of a suggestion that he has an overreliance on a 4-3-3 formation which needs to incorporate all three of Real Madrid's famed attacking trio of Karim Benzema, Gareth Bale and Cristiano Ronaldo in order to be successful.

Zidane went against that in Saturday's trip to Estadio San Mames and showed that in fact he didn't value the 'BBC' above all else as he made several tactical switches to stop the Basque club in their tracks.

It was set to be a monumental encounter on the right flank with the excellent Inaki Williams going directly against Marcelo with the Brazilian having been struggling for form of late.

Zidane has made no secret of the fact his team's recent defensive frailties have left him frustrated and it soon looked as though Williams would ensure his stock rose even higher with a fine display against the LaLiga leaders up until the French coach made a change.

Zidane showed that his coaching style was far from rigid by handing Marcelo extra support in the form of Gareth Bale on Los Blancos' left side as the game progressed.

The switch to a 4-4-2 was decided upon after 62 minutes of play it was put into action as Bale was positioned on the left of a midfield four in order to help track Williams' movement all along the flank.

A large proportion of the recent problems that have landed at Marcelo's door have actually involved Ronaldo with the Portuguese star accused in some quarters of not tracking back, with it even suggested that Sergio Ramos shared this sentiment with his teammates.

Lucas Vazquez was brought on for Luka Modric in order to add even more energy in midfield as Ernesto Valverde looked to unlock the Madrid defence.

Now for context it must be remembered that at this point in the match Real Madrid were leading 1-0 courtesy of Karim Benzema's goal but Zidane recognised the trouble his team were in.

Marcelo was barely containing Williams as the Spaniard beat the Brazilian with a frightening regularity on what surely was an audition for a potential summer move to one of the continent's largest clubs.

With Ronaldo now paired in an attacking two with Benzema there was less defensive responsibility placed on his shoulders as the team sought to grind out a win.

Marcelo is a popular character in the Spanish capital but his erratic defensive form this season has not gone unnoticed in the corridors of power at the Estadio Santiago Bernabeu and it is unsustainable for the club to continue to have a position of such concern at the back.

Bale's intervention aided his teammate significantly and whilst it showed Zidane's nous for on the fly changes during a match, this is still a concern ahead of a Champions League meeting with Carlo Ancelotti's Bayern Munich.

It has been no secret that the LaLiga title has been Los Blancos' priority this season and Zidane has made clear his charges will fight until the very last second for it.

After suggestions he couldn't react to match situations, Zidane did just that and thus earned Real Madrid a potentially decisive victory in the title race and this bodes well for his future in the dugout in Madrid.

Runaway Premier League leaders Chelsea continued their relentless progress, moving 13 points clear at the top of the table as Gary Cahill scored a late winner in a hard-earned and feisty 2-1 win at Stoke City on Saturday.

Even without the injured Eden Hazard, Antonio Conte's men, who have lost just one game in 2017, triumphed again when Cahill struck three minutes from time to make amends for giving away a first-half penalty.

With only 10 games left, it seems wholly unlikely that the leaders can be caught now and their ecstatic celebrations at the end of a tough game suggested that they believed it may have been the victory that assures their title triumph.

Not that Conte was remotely entertaining any complacency. "We need to take 21 points for the title win. Today was a great win, a good signal, but it is important to continue with the same commitment and work rate as a team," he told the BBC.

Others think the race is already won, though. "It is Chelsea's title now and you could see from their celebrations, we ran them close," said Stoke manager Mark Hughes.

Chelsea had looked set for a comfortable afternoon when Willian scored a 13th-minute free kick, his shot squeezing into the net after a blunder from Stoke keeper Lee Grant, who could only fumble the ball over his own line.

Yet Stoke hit back when Jon Walters, having been fouled by Cahill, picked himself up to score from the penalty spot seven minutes before the break.

Diego Costa became embroiled in running battles with Stoke's defenders, who appeared to try to wind up the volatile striker as he endured a frustrating afternoon chasing his 50th Premier league goal.

He earning himself an early booking and was also involved in incidents which saw yellow cards shown to Bruno Martins Indi and Phil Bardsley.

Chelsea would not be denied and created most of the second-half chances, with Marcos Alonso hitting the bar with a free kick and Pedro being denied by Grant before Cahill swept in the winner.

It ultimately sealed their 19th win in their last 22 league games, with Stoke's misery completed when Bardsley received his marching orders in the dying seconds after receiving a second yellow card for a foul on Cesc Fabregas.