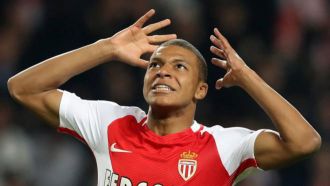 Zidane: Hot balls? I just laugh when people mention it

Saturday, 18 March 2017
With the Champions League quarter-final draw having paired Real Madrid with Bayern Munich, coach Zinedine Zidane laughed off suggestions that there was any kind of fix.

As well as his side being handed a tough tie, so too were Barcelona, after they were drawn against Serie A champions Juventus.

The draw does however give Zidane the chance to come up against Carlo Ancelotti, who he worked alongside during the Italian's time on the Estadio Santiago Bernabeu bench.

"Bayern won't be an easy game as they are a very good and tough opponent.

"Although I haven't talked to Carlo, I don't think they are afraid of us and we are the same. It is certain to be a very good game of football.

"I learned a lot with Carlo, he is a good person and we all know what he did here and I think both teams have a 50-50 chance of qualifying. It will be special.

"We know each other very well but in a game like this, anything can happen. The important thing is not the draw. It is the attitude."

Before Zidane can worry about preparing for the Champions League though, his side face a difficult trip to San Mames and Athletic Club and he isn't expecting a routine away fixture as his side aim to extend their lead atop LaLiga.

"The only team who have beaten them at home was Barcelona and we know that this game is going to be a harder one than normal," continued Zidane.

"It is a very tough place to play but we are going to try and score as always.

"I don't know if winning games like these are important for the title as they are simply the same three very important points you get in any game but we must defend well, work hard and show confidence and personality.

"If we put all of these ingredients together then we can come out on top."".

Zidane: Mbappe was about to sign for Real Madrid

The 18-year-old is one of Europe's hottest properties at the moment and remains coveted by European football's biggest clubs.

"He was almost signed by Madrid, but he went to Monaco," Zidane said at his pre-match press conference for the game against Athletic Club.

"We know he is very good, at his age he is doing something fantastic."

Real Madrid, Atletico Madrid and Barcelona face up to the worst possible period of their calendar in April as two weeks of hectic fixtures creep up on the horizon.

On April 8, a Madrid city derby takes place with an El Clasico clash on April 23 and just the small matter of Champions League quarter-final fixtures between those.

In the case of Real, the two games against Bayern come at a delicate time for them in their bid for LaLiga glory. In addition to the derby fixtures and Champions League games, they also face Sporting in the middle of it all.

Atletico have a similar tough run awaiting them in mid-April. They follow up the Madrid derby with a tie against Leicester at the Estadio Vicente Calderon.

The Rojiblancos host struggling Osasuna before their trip to England and round off a tough period with a trip to Barcelona, where they will face Espanyol.

April's run of games is set to make or break Barcelona's season. Matches against Malaga and Real Sociedad are played around fixtures which could see them reach the Champions League semi-final and take a massive step towards the title by potentially beating Real at the Estadio Santiago Bernabeu.

Ancelotti: I know Real Madrid well and it will be exciting

Having helped Real Madrid to their 10th Champions League title, Carlo Ancelotti is now aiming to eliminate them from the competition this season.

The Bayern Munich boss was at the helm for Los Blancos in 2014 when they clinched La Decima in Lisbon against city rivals Atletico Madrid andi is anticipating a tough game against his former side.

"It is exciting for me to play against Real Madrid because they are a team that I know very well," he told the assembled media.

"I think it will be a very difficult match but we are confident. It will be a duel between giants but we want to win the Champions League this season."

Club president Uli Hoeness also believes that drawing the competition's holders will make it an exciting quarter-final clash for supporters.

"I think that all of the fans will be happy," he said. "We expect them to be two very big games."

One of the most iconic images of the Champions League final when Real Madrid won La Decima is that of Zinedine Zidane shouting instructions to the players, while Carlo Ancelotti watches him in the background.

Now, the two coaches of that historic team cross paths in pursuit of glory in Cardiff.

Ancelotti intends to make history and knock out 'his' Madrid on his return to the Estadio Santiago Bernabeu.

This European classic also has great memories for Real because part of that magnificent run in 2014 included a 4-0 thrashing of Pep Guardiola's Bayern side.

That night was the prelude to the legend of Sergio Ramos, scorer of two goals, and it's also worth recalling that on the way to winning their eighth and ninth Champions League, Los Blancos also eliminated the Germans along the way.

The duel will see Xabi Alonso's return to the Bernabeu in what may be his last Champions League game.

He has announced his retirement at the end of season and will look to survive in the competition at the expense of the team that he played for over six seasons.

In all matches played between these two European giants, Real have nine wins and Bayern 11.

Guardiola: I have more power than ever to shape the squad

Manchester City manager Pep Guardiola will not turn to a more defensive approach to shut out Liverpool, the Premier League's leading scorers, when the teams meet at the Etihad Stadium on Sunday.

Guardiola was fiercely criticised for his attack-minded tactics during the Champions League last-16 tie against Monaco, which they lost on away goals as the French side brutally exposed City's fragile defence in a 6-6 aggregate draw.

"No. At the end we have to try," Guardiola told reporters on Friday when asked if he would be making tactical changes for the Liverpool clash.

"We have to defend better. When we create these kind of chances the opponents have to sit back."

"I have more power than ever to shape the squad," he said.

Guardiola also rejected reports suggesting City are preparing for a major clear-out in the next transfer window as the manager looks to reshape his squad.

"I have heard people have written that I will change 12 or 13 players. That is impossible. They have contract. You have to pay them," the Spaniard added.

"We will try and improve the team. Next month and a half I expect a huge step forward. Next season will be better. Just because they are out of contract doesn't mean they will all leave. Some will stay."

Guardiola said he was wary of rushing back injury-prone captain Vincent Kompany, who has made just six appearances this season, following his latest injury setback.

"I would like a little bit more time with him to be sure... But we're so happy with his progress," Guardiola said.

City are third in the table with 56 points, one above fourth-placed Liverpool who have played one game more.
Email : [email protected]
Προηγούμενο : The six Monaco youngsters taking Europe by storm | Επόμενο : Cristiano Ronaldo after substitution: Why me? F*** off
Προβολές : 620
- 3466 προηγούμενη ημέρα