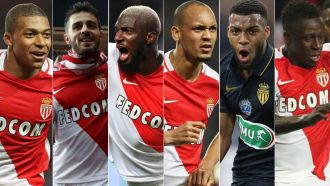 Friday, 17 March 2017
Leonardo Jardim's Monaco have been dazzling Europe all season and their Champions League victory over Manchester City was just the latest success in what has been an impressive campaign, one built on youth.

13 seasons after their last title - a French League Cup - Monaco are well and truly back and their band of youngsters have been the driving force behind their impressive performances, with six under-23s taking on leading roles.

The biggest clubs in the continent are now interested in these promising talents, who we take a look at below:

The youngest of Jardim's stars, Mbappe has been christened 'the new Henry' given his ability to find the back of the net - he has 11 goals in his past 11 appearances - from his wide forward position, although he is also capable of playing as a centre-forward.

The Frenchman is a complete midfielder, who can contribute in defence and in attack, and Atletico Madrid made an offer last summer for the player now thought to be worth 25 million euros.

For some time, much has been expected of the Portuguese player and he is living up to those expectations this season, making the 16 million euros Monaco paid Benfica for his signature seem worth it.

The Brazilian actually spent some time in Real Madrid Castilla and debuted for the first team under Jose Mourinho before ending up at the Stade Louis II, where he has excelled as a defensive midfielder and as a right-back.

Didier Deschamps has been so impressed with the left-back that he has called him up for his France squad, with the attack-minded Mendy - who has already made 100 Ligue 1 appearances despite his age - able to offer extra attacking impetus on the left flank.

Although this defensive midfielder rarely attacks, Bakayoko came up with the decisive goal in the Ligue 1 leaders' clash with Manchester City and he could be terrorising Pep Guardiola further given that Manchester United are interested in him.

The Champions League quarter-final draw is upon us, and for yet another year Spanish football has proven itself to be on top, with three of the eight remaining teams coming from LaLiga.

Barcelona and Real Madrid are mainstays by this point at this stage of the European competition, but Atletico Madrid too have made the quarter-finals in four consecutive seasons, not to mention the finals twice.

In fact, in the last five seasons, two of the three Spanish giants have made the semi-finals, proof of how dominant Spanish football truly is.

Since 2000, Barcelona have captured four titles and Los Blancos three, a feat unmatched by their German, Italian, or English counterparts.

Champions League titles by country since 2000

This dominance has become even more pronounced in recent seasons, especially if Sevilla's Europa League dominance is taken into consideration.

Only Bayern Munich and Dortmund achieved a similar feat back in 2012/13 but they were unable to sustain their dominance as clearly as the Spaniards.

With that in mind, it is quite clear who are the teams to avoid.

After a narrow 1-0 victory at home against Rostov, Jose Mourinho hit out at his critics and lamented everything from the Russian pitch in the first leg, to unfavourable scheduling in his eyes.

A lone Juan Mata goal lifted Manchester United into the Europa League quarter-finals, but they'll have to be better if they are to make the competition their best chance at silverware this season.

"We have a lot of enemies," Mourinho said in his post-match comments. "It is difficult to play on Monday with 10 men, then play on Thursday, and then once again on Sunday at noon.

"People can say we should have played better but the reality is that we have a lot things going against us."

As a result, Sunday's match against Middlesbrough wasn't approached with much optimism from the Portuguese boss.

"Fatigue pays its price, and we'll probably lose on Sunday," he continued. "The teams above us don't know anything about being fatigued, about the accumulation of so many matches, about the absence of sleep.

"I'll never forget the UEFA delegate in Rostov telling me that our health insurance would cover our injuries [given concerns over pitch condition]."

Manchester United the team to avoid for Berrizo's Celta

At 13:00 CET in Nyon on Friday, Celta Vigo will be hoping to not be paired up with Manchester United in the Europa League quarter-final draw.

The Red Devils have been knocked out of the FA Cup against Chelsea on Monday and will therefore be looking at the Europa League as their best chance of silverware, not to mention a way to secure Champions League football as they currently still sit sixth in the Premier League.

An impressive Lyon were able to overcome Roma and will also be mighty opposition, whereas Ajax are always a respected foe.

Besiktas didn't seem to mind being a man down, Anderlecht defeated their Cyprian oppponents in the second leg by the same score they did in the first.

In the aftermath of Barcelona's historic comeback against Paris Saint-Germain, Lionel Messi ran to celebrate with the fans, and Mexican photographer Santiago Garces cemented the moment in history with a shot almost as significant as Sergio Roberto's.

Hoisted as if a god, Lionel Messi euphorically screamed into the crowd, and as the crowd drew around him at his feet, the worshiping was complete and the stage was set for the perfect photo at the opportune moment.

Now, that photo finds itself sitting outside of the Camp Nou to welcome culers to the stadium.

Alongside the photo is the message "Welcome to the Camp Nou, History happens here."

Oblak isn't yet the world's best goalkeeper, but he can be

Atletico Madrid would surely have gone through to the Champions League quarter-finals anyway, but that should not diminish the brilliance of Jan Oblak's hat-trick of saves in the 69th minute of Wednesday's last-16 second leg against Bayer Leverkusen.

First, the Slovenian stood as tall as his six-foot-two frame would allow him in order to deny Julian Brandt after the 21-year-old had burst through one-on-one.

Second, he leapt leftwards across his six-yard box from a sitting start to slap away Kevin Volland's rebound.

Third, he sprung just as far back in the opposite direction, like a big Slovenian glove-wearing Newton's Cradle, to reach Volland's second attempt in as many seconds.

Fourth, he exhaustedly, delightedly and deservedly collapsed backwards into his goal after having watched Javier Hernandez's effort trickle wide and out for the most well-earned of goal kicks.

It's no hyperbole to suggest that his triple-save might go down as the most impressive 10 seconds of goalkeeping to ever take place, but what would be an exaggeration would be to get caught up in the excitement and to suggest that the Atletico shot stopper is already the best in the world.

That's exactly what Antoine Griezmann claimed after the match, but anyone not wearing red-and-white-tinted spectacles might view the situation a little differently.

It's true that Oblak is among the best goalkeepers on the planet and he deserves far more credit for Atletico's binary code-esque goals conceded record than he receives from some quarters - many still assume he is piggybacking on the work of the team's stellar back line - but there is a need to pump the brakes when it comes to prematurely crowing him the very best in the business.

At 24 years of age, Oblak still has some imperfections and he is still improving as he races to match the consistently high level of more experienced players such as Manuel Neuer, Gianluigi Buffon, David de Gea and Hugo Lloris.

Specifically, his distribution requires some work, as anyone who watched his passing blunder in Atletico's draw away at Deportivo two weeks ago will testify to.

Looking at his average distribution success this season, the Slovenian's LaLiga rate of 61 percent is the 75th best in Europe's top five leagues, while his Champions League equivalent of 55 percent is just the 43rd of all goalkeepers to have featured in this season's competition.

If truly nitpicking, his performance in penalty shootouts could also be improved.

Of the 29 penalties he has faced in the middle of matches, he has impressively saved nine of them, but when the pressure is at its highest, he has struggled and has parried just two of the past 28 penalties he has faced during shootouts, most memorably appearing to freeze during the 2016 Champions League final.

For such a young goalkeeper, these are minor issues that can be improved with time and experience, so Oblak is still well on his way to establishing himself as the world's best goalkeeper.

Yet it would be false and unfair to pretend he is already the No. 1 of the No. 1s, especially if basing it on 10 - admittedly incredible - seconds.