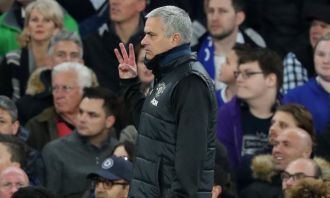 Conte and Mourinho square up to each other

Tuesday, 14 March 2017
The FA Cup quarter-final between Chelsea and Manchester United experienced a moment of extreme tension between Antonio Conte and Jose Mourinho as the pair squared up to each other after a strong tackle on Marcos Alonso.

Ander Herrera's double yellow in the first half was the trigger for the confrontation between the two coaches.

Conte went crazy afterwards and seemed to reproach Mourinho, and in the end, the fourth official had to separate the them.

Chelsea qualified for the semifinals thanks to a goal from Kante in the 51st minute of the match.

Mourinho slams Chelsea fans for chants: 'Judas is number one'

Manchester United's Jose Mourinho, humbled for the second time this season in front of the Chelsea fans who once idolised him, did not go quietly on Monday as he declared that he remains the London club's number one manager.

Mourinho, winner of seven major trophies during two spells in charge at Stamford Bridge, suffered 'Judas' taunts by fans with short memories as his battling 10-man United side went down 1-0 in a stormy FA Cup quarter-final.

The Portuguese coach also clashed with his successor Antonio Conte, who remains on course to claim a Premier League and FA Cup double in his first season in Mourinho's old seat.

"They can call me what they want. Until the moment they have a manager that wins four Premier Leagues for them, I'm the number one," Mourinho, sacked last season after leading Chelsea to a double of league and League Cup in 2014-15, told reporters.

"When they have somebody that wins four Premier Leagues for them, I become number two. Until then Judas is number one."

Mourinho became involved with fans behind the away dugout during a tetchy first half, raising three fingers -- the number of Premier League titles he delivered for the club.

He was particularly frustrated by referee Michael Oliver's decision to send off Ander Herrera in the 35th minute for a second yellow card -- both for fouls on Eden Hazard.

United's players seemed to target the livewire Hazard before the interval, something that did not go unnoticed by Italian Conte. Mourinho said the sending off changed the game and that the holders would have won had it been 11 versus 11.

"I think we can agree there was a match until Herrera saw the red card and there was another match after that," Mourinho, whose side can still add the Europa League to the League Cup they have already secured in Mourinho's first season, said.

"Before that I saw a match that we were going to win. When we stayed with one player less they could be more dominant. But in spite of that we defended well and had the biggest chances.

"Mr Oliver goes home and he can do his own analysis because I don't want to analyse his work," he added.

United, who suffered only a third defeat in all competitions since a crushing 4-0 loss at Chelsea in October, face Rostov in the Europa League last 16, second leg on Thursday level at 1-1. They are also vying for a top-four Premier League finish.

Chelsea manager Antonio Conte took a swipe at Jose Mourinho's tactics on Monday by accusing his Manchester United team of trying to kick tricky forward Eden Hazard out of their FA Cup quarter-final at Stamford Bridge.

Hazard survived the onslaught and helped Chelsea run out 1-0 winners in a prickly game, with United reduced to 10 men in the 35th minute when Spaniard Ander Herrera received a second yellow card.

"We came to play football... but for 25 minutes it was impossible for Eden Hazard to play, because he was kicked," Conte told reporters.

"It could be a tactic. I think everyone saw this... Sometimes when you play against a player with a good talent you try to intimidate this player," the Italian added. "I think that the referee must protect this type of player."

"It's very difficult and very dangerous to receive a kick from the back... He has a strong character and he showed that today."

Conte, chided by his predecessor Mourinho for celebrating too wildly after the fourth goal of Chelsea's 4-0 Premier League drubbing of United last October, said he controlled his emotions during Monday's tie.

But the pair had squared up on the touchline in the first half after a series of crunching tackles on Hazard and the fourth official had to stand between them. Referee Michael Oliver paused the game to tell the two managers to calm down.

A fist pump rather than a traditional leap into the crowd by Conte followed N'Golo Kante's 51st minute goal for Chelsea.

"I controlled the emotion very well today. I didn't exalt our goal but its normal for managers to try to do our best to push our team," the Italian said.

The game had been billed as a showdown between Chelsea managers past and present but Conte, aiming for a league and cup double said: "The coach is not the most important thing.

Steve Komphela, coach of South African side Kaizer Chiefs, has singled out Neymar as an example to his players of how not to conduct themselves during games.

The Barcelona forward is known to reach into his bag of tricks to entertain fans when his side are in control of games, which some feel is unnecessary showboating.

Komphela is one of those men, who was unhappy with his players performing similar actions during their 3-0 Nedbank Cup win over Stellenbosch.

"You shouldn't do that," he said firmly. "Football is culture and tradition and that is what South Africans want from the game.

"You still want to give the fans the skill and flair that they want but you must also do it in a manner that is productive.

"When Neymar has the ball in the corner and he flips it over someone's head the world says 'what great skill that is, what a player'.

"When we do it in South Africa in a manner that is productive the same must go and if not, we as coaches have to reprimand the player."

Real Madrid added another three points to their title challenge on Sunday evening, but their play was unconvincing and the fans at the Estadio Santiago Bernabeu did not hide their disgruntlement, whistling Zinedine Zidane's team.

Sergio Ramos stepped up to save Los Blancos again, but it is too risky to keep relying on the captain's determination and character.

They continue to inch towards the LaLiga title and are still alive in the Champions League, but these successes have been achieved thanks to individual moments of brilliance from certain players, rather than convincing collective play.

Unlike in previous weeks, the concerns had nothing to with the debate over whether or not the BBC front three of Gareth Bale, Karim Benzema and Cristiano Ronaldo should all start together, as the suspended Welshman was in the stands.

The opening 15 minutes of Sunday evening's match were acceptable, but Real Betis then threatened and scored thanks to an error from Keylor Navas, who could benefit from some time on the bench.

After that opening half of doubts and a lack of ideas, Los Blancos displayed little football in the second half, but a lot of character, and that helped them get the job done, even if the 10 men of the visitors were able to manufacture a chance right at the end.

"We need to play better," Ramos admitted after the full-time whistle.

Given that the fanbase is demanding more, that appears to be an urgent priority.