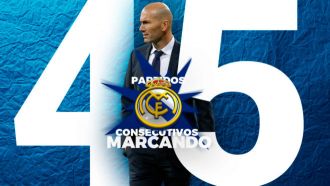 Thursday, 02 March 2017
It has been a season of tumbling records at the Estadio Santiago Bernabeu this term with the record of 40 matches unbeaten already set, however Real Madrid have broken yet another record.

This time it is testament to the team's attacking play under Zinedine Zidane with the club having scored in their 45th consecutive match.

Isco's opening goal against Las Palmas was record breaking moment as Barcelona's previously set benchmark in the 1943/44 season no longer the optimum.

There are few teams across Europe who have ever achieved such a feat although at the moment the current streak set by Los Blancos isn't the best ever achieved.

The challenge for Zidane's charges will be to beat the record set by Bayern Munich over the course of the 2012/13 and 2013/14 seasons where they scored in 63 consecutive matches.

Luis Enrique: I will not be Barcelona coach next season

After a comfortable 6-1 victory, Luis Enrique surprised everyone in his post-match press conference by announcing that he will not continue as Barcelona coach after this season.

The Asturian boss had been under some pressure to announce his intentions, and the Blaugrana coach considered that after the win was the ideal time to make his decision public.

"I will not be Barcelona coach next season," he told reporters. "It was a very difficult decision to reach, one that I've thought a lot about.

"I have to be faithful and fair with what I believe."

Luis Enrique admits that he had told the board of the possibility that he might leave during this year's pre-season, which the club were fine with.

"I had a meeting with Robert Fernandez [technical secretary] and Albert Soler during pre-season and they told me to take my time," Lucho continued. "The reason I am leaving is because I live my profession very intensely, have very few hours to rest, and hardly have a chance to disconnect."

Announcing the decision now won't impact the end of the current campaign in any way, according to the Blaugrana tactician.

"There are three exciting months left, and I will be just as dedicated in these last three months," he concluded. "It'll be difficult in the Champions League but with everyone's support we'll try to turn that match around.

"I'd like to thank the footballers for supporting me and the club for first trusting me with the B team and then the first team."

Current Manchester City coach took a second to look back at the state of affairs at his former club to discuss Luis Enrique's decision to leave as Barcelona coach at the end of the season.

Although his connections with the Catalan club couldn't be deeper, Guardiola primarily spoke as a fan.

"As a fan, I'm very sad because we're losing the perfect coach for Barcelona," Guardiola said of Luis Enrique. "I say that because of his personality, because of his character.

"All I can do is thank him for what he did for my team.

"As a coach, I understand his decision completely and wish him the best."

Bartomeu: Now was the right time for Luis Enrique to announce

It is always tricky to find the ideal time to announce such an important decision, but Barcelona club president Josep Maria Bartomeu has backed outgoing coach Luis Enrique amidst criticisms over his timing.

After a comfortable 6-1 win over Sporting Gijon, the Asturian boss told his players and then the press that this would be his last at the Camp Nou.

"Now was the right time for Luis Enrique to announce that he wasn't going to continue as coach because that way he avoids speculation," the president said. "Last summer, he told the club he was thinking about his future, and he told us of his decision several days ago."

The board have noted the coach's accomplishments and have celebrated his every success, satisfied for all that he has done for the institution.

"He is a super coach that has won eight of 10 titles in his first two seasons and is now fighting on all fronts in his third," Bartomeu pointed out. "He bolsters the image of the club and wins.

"What we have left are three exciting months.

It has been a catastrophic week for Sergio Asenjo with the goalkeeper rupturing his Anterior Cruciate Ligament for the fourth time in his career, yet he has been supported by teammate Roberto Soriano who showed a message after his goal.

Just two minutes into the Italian's return to action he scored and he unveiled a tribute to his teammate by holding up replica of the club's goalkeeping shirt.

In a week where punishments for such acts have been at the very forefront of the agenda, it is important to note that Soriano was not booked.

This was because he didn't take off his own shirt or even lift it as Real Sociedad's Juanmi had done on Tuesday.

The goalkeeper's shirt had a message of support and encouragement to Asenjo printed on it and it was certainly noticed by the player himself.

Watching at home as he begins his recovery, Asenjo showed his appreciation for the gesture on his social media pages.

Chelsea's Victor Moses has signed a two-year contract extension that will keep him at the club until 2021, the Premier League leaders said on Wednesday.

The 26-year-old, who started out as a midfielder, has become a key player for Chelsea this season, excelling in a wing-back role since manager Antonio Conte switched to a 3-4-3 formation in October.

Moses, who joined the club in 2012, has spent most of his career out on loan, with spells at Liverpool, Stoke City and West Ham United, but has made 28 appearances in all competitions this season under Conte, scoring four times.

"We're having a great season, I'm enjoying my football and we have a good manager here that has given every single one of us confidence," Moses told the club's website. (www.chelseafc.com)

"I just want to keep on enjoying it and working hard for the team."

Chelsea are 10 points clear at the top of the table and visit ninth-placed West Ham United on Monday.

Yet another top player may soon be on his way to LaLiga with fresh talk of Alexis Sanchez becoming a serious target for Sevilla and Atletico Madrid.

Contract talks between the Chilean and his current club, Arsenal, have struggled along and with his deal expiring in June 2018, the North London club may attempt a big money sale this summer to prevent the forward leaving for free.

Daily Star report that Sevilla and Atleti are in the driving seat to sign Sanchez, with the Andalusians coached by Jorge Sampaoli, who brought great success to the Chile national team by making the 28-year-old central to his attacking philosophy.

However, the forward is said to want around 220,000 euros per week in salary to stay at Arsenal and finding the funds necessary to pull of the coup will be difficult for either side.