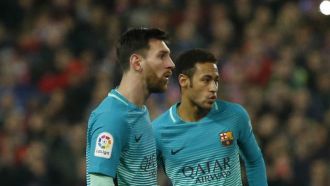 Wednesday, 01 March 2017
UEFA president Aleksander Ceferin has admitted there is a possibility of Lionel Messi and Neymar being denied entry to the United Kingdom due to their ongoing legal concerns, which could be a problem since the Champions League final is being hosted in Cardiff.

Barcelona must produce a remarkable comeback against Paris Saint-Germain to have any chance of reaching the showpiece event, but Ceferin is still concerned about the Westminster government's policies and revealed that the country could miss out on future finals.

"Neymar and Lionel Messi both have [tax evasion] procedures going on," he told the New York Times.

"This year, the Champions League final is in Cardiff.

"Imagine if they did not let them in.

"That is a big thing for us, if players from England can travel anywhere, but players from other teams cannot travel to [the UK].

"With free movement in Europe, it is much better.

"If we see that players cannot enter because they have any sort of procedure ongoing then we will simply think if we should play our European matches there."

He referenced the incident which took place during the group stages, when Serge Aurier was denied entry for a match against Arsenal.

"I was very disappointed when Aurier, from PSG, was not allowed to enter England," the Slovenian said in the interview.

"That will worsen when Brexit happens, especially if the reasons were as formal.

"We could have a serious problem."

He also discussed the recent travel restrictions introduced at the United States border, warning that they could harm a future World Cup bid.

Last weekend felt like a watershed moment in the 2016/17 LaLiga title race; the kind of landmark that will be looked back upon as profoundly meaningful once all has been said and done. Barcelona, Real Madrid and Sevilla all faced tricky tests, and in all three cases resilience saw them through.

Real Madrid came from two goals down against the best defence in LaLiga to beat Villarreal 3-2, with Lionel Messi scoring a late winner earlier in the day for Barcelona against Atletico Madrid. Sevilla also showed their mettle by overcoming derby rivals Real Betis 2-1 at the Estadio Benito Villamarin. But not all resilience is equal.

Take Barcelona's win at the Estadio Vicente Calderon, for instance, where Luis Enrique's side recorded a second straight 2-1 win to temporarily move ahead of Real in the league table. On the face of things, the Catalans have recovered to an extent following the 4-0 Champions League humiliation in Paris two weeks ago.

But in the two games they have played, against Atletico and Leganes, Lionel Messi has dug his teammates out, scoring late winners in both. Barcelona as a team have not recovered from their Parisian embarrassment, with huge deficiencies still to be found in midfield and particularly at the back. Not for the first time, Messi is masking the Catalan's true condition.

The resilience of Messi is in no doubt, but for how much longer can he continue to sustain his team's title chances? Barcelona have always revolved around the Argentine, but never before have they so dependant on him. Without Messi in top form, Enrique would be in a much deeper hole than he already finds himself in.

Contrast this to Real Madrid and the resilience they demonstrated in Sunday's 3-2 win at the Estadio de la Ceramica, coming from 2-0 down with under half an hour to play to claim all three points by the time the final whistle sounded. Zinedine Zidane's side also demonstrated a mental toughness, but their resilience was a product of the team as a whole rather than any one individual.

Sure, Cristiano Ronaldo found the net, converting a controversial penalty kick, but the Ballon d'Or holder merely contributed to the comeback rather than pulling it off all on his own. He played his part, but Real aren't reliant on him in the same way Barcelona are on Messi.

Gareth Bale got the comeback off the ground, after all, heading home a cross to half the deficit. Then there was Ronaldo's equaliser from the spot before Alvaro Morata came off the bench to net the winner.

From front to back, from full-backs Marcelo and Dani Carvajal peppering the opposition penalty area with cross, to Isco providing fresh drive and dynamism through the middle as a substitute, Real Madrid's recovery was a collective effort.

This is why they, and not the Blaugrana, will win the league title this season. Real have their flaws, with many of them exposed since the end of their 40-game unbeaten run last month, but their faults aren't fundamental like they are at the Camp Nou. Messi is good enough to carry Barcelona, but not all the way to a championship.

Sooner or later their troubles will bubble to the surface once more, like they did at the Parc des Princes against Paris Saint-Germain. Under Enrique they have lost their identity as a team with major structural work needed to restore the Catalan club to their former glory. There is no number of late Messi winners that can compensate for this.

Resilience saw Barcelona and Real over the line last weekend, but in very different ways. Messi might well have the beating of Ronaldo right now, even if Ronaldo has the Ballon d'Or to show for his supremacy. Yet it's for this reason that Real Madrid will come out on top in the title race.

Zidane: What Real Madrid are doing is being achieved only on the pitch

There is no conspiracy behind Real Madrid's position at the top of the LaLiga table in Zinedine Zidane's mind, as the French coach insisted that Los Blancos are in the position they are in because of their on-pitch performances.

While the tactician did not want to get involved in the latest officiating controversy, he did dismiss the idea that his team have benefitted from a helping hand.

"What we're doing is being achieved only on the pitch," Zidane said at his pre-match press conference, when asked if the claims of refereeing bias have undermined Real Madrid's achievements.

"I don't get involved in what the referees do and I don't think my players do either.

"My players respect the refereeing body a lot.

"I'm not going to get involved in [the controversy surrounding Roig and Real Madrid bags]. I respect everybody.

"I don't agree with these claims and it hurts, but so be it."

Discussing the midweek challenge posed by Las Palmas, Zidane was not going to let the fact his team have played so many matches in quick succession become an excuse.

"[Fatigue] will always exist," he told reporters at Valdebebas.

"We know how important each match we play is and we're prepared."

As for a reunion with Jese Rodriguez, Zidane hoped his former player could thrive on the Canary Islands, after this fixture of course.

"I hope he does well as I really love Jese as a person and as a player," the coach said. "I hope that, from Wednesday onwards, he does really well with Las Palmas."

Finally, he was asked about the images of Isco and Alvaro Morata referring to themselves as Real Madrid's 'second course' and 'dessert' and he stressed that there was no controversy.

"They were joking," he said of the images.

"You've seen how they then entered the game and that was perfect."

Napoli were left fuming after Juventus were awarded two penalties early in the second half on their way to a 3-1 win in the first leg of their Italian Cup semi-final on Tuesday.

To add insult to injury, Napoli had their own penalty appeal turned down immediately before Juventus were awarded their second.

Paulo Dybala converted both spot kicks for Juve and his fellow Argentine Gonzalo Higuain scored in between after Jose Callejon had given the visitors a halftime lead.

It was Higuain's second goal in as many meetings against Napoli since he left them to join Juventus in July after scoring a record 36 Serie A goals last season.

Higuain had two years to run on his contract with Napoli, who did not want to sell him, but moved after the Turin club agreed to pay a 90 million euro ($98.83 million) buyout clause in his contract.

Poland forward Arkadiusz Milik made his first start for Napoli since suffering a knee ligament injury in October and was involved in the move which ended with Callejon turning the ball in from a narrow angle in the 36th minute.

Juventus levelled within a minute of the restart when Kalidou Koulibaly mis-timed a tackle on Dybala who converted the penalty himself.

Higuain then scored from the acutest of angles in the 64th minute when the ball fell to him after Pepe Reina completely missed Juan Cuadrado's cross.

Napoli had their own appeal turned down, claiming Raul Albiol had been tripped. Juventus immediately broke upfield before Reina dived at the feet of Cuadrado, who went tumbling over.

Replays showed that Reina got a hand to the ball before making contact with the Colombian but referee Paolo Valeri pointed to the spot and Dybala converted again.

Guti: I want Barcelona to come back against PSG

Quite surprisingly, Real Madrid Juvenil A coach and former player Guti broke trend to praise Barcelona and wish the club luck in their Champions League return leg against Paris Saint-Germain.

The ex-midfielder had nothing but good words for Catalan defender and captain Gerard Pique in particular, for his leadership and willingness to take accountability in the face of adversity.

"I want Barcelona to come back against PSG in the Champions League that way they won't be able to focus on LaLiga as much," Guti said.

"I want Pique to score the fifth goal because he deserves it, he is the only one facing the situation head on, despite getting criticised by all sides."