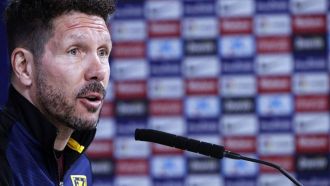 Simeone: Barcelona are still the best in the world

Sunday, 26 February 2017
As LaLiga race tightens, Atletico Madrid hope to continue to threaten the Real Madrid and Barcelona duopoly, although the latter is still a formidable opponent in the Argentine's eyes.

A dominant midweek win over Bayer Leverkusen in the Champions League showed that Los Rojiblancos are still a force to be reckoned with, and an uptick in form has the Colchoneros boss excited at the possibility.

"Barcelona are still the best team in the world," Simeone said. "After dominating for the last decade, and winning eight titles under Luis Enrique, anyone can have one bad match in Paris.

"In the Copa del Rey, we were bettter for three halves and that wasn't enough, which proves how tough they are."

Whether or not Atletico will press Barcelona's build-up is still unclear, according to the Atletico coach.

"We went after them high up the pitch in the Copa del Rey and conceded twice," the Argentine warned. "Whether we defend five metres further up or farther behind, I am expecting the very best Barcelona."

The LaLiga title race is far from over, and while Sunday may be a key moment, there is still a lot left to play for.

"Last season we lost twice in the final 10 matches and that goes to show you that there is a lot of LaLiga left and anything can happen," he stated. "Barcelona are our rivals for third place and who knows if more than that, but it is still too early to tell."

Selection dilemmas up front, in goal, and in the heart of defence have been brought to the forefront in recent weeks, and Cholo wonders why it is the strikers and not the defenders that get all of the attention.

"It would be unfair to sit either Jan Oblak o Miguel Angel Moya, but football is like that sometimes," Simeone continued. "Kevin Gameiro and Fernando Torres are also fighting for just one spot, as are four centre-backs for just two spots.

"The best thing is to have internal competition.

"What could be better than having these choices and to have all of your players available?"

Luis Enrique: I don't envy anything from Atletico, I'll stick to my team

On Saturday afternoon, Luis Enrique conducted one of the more unpleasant press conferences of his two and a half year reign as coach of Barcelona, attending the media with short, sharp answers that included a terse response when asked about Atletico Madrid, their opponents on Sunday afternoon.

In less than a quarter of an hour everything was done and dusted, mainly due to his refusal to go into any depth when answering questions.

"Our goal is to play a great match and get the three points," he began.

"Atletico are going to present us the same difficulties as always, although it will be different than in the cup.

"It's one of the matches of the weekend and very important for both teams."

Barcelona could go top, albeit temporarily, with a victory, but the Rojiblancos could present problems for the Catalans - not that it bothered Luis Enrique.

"I like my team as it is," he continued.

"Atletico are a top team, but I don't envy anything about them and prefer to stick with talking about my team."

Suggestions that some senior figures in the dressing room want the coach replaced were met with a sharp riposte.

"The team has always been united," he said.

"They're happier when things have gone well and less happy when they have gone wrong.

"In any event, I have a rule not to talk about internal things that affect the development of the team."

The long week has allowed the team to prepare properly, and given the squad two much needed days off to recharge the batteries too.

"That indicates that the calendar is hard and takes a toll but the week has served us well as we have been able to rest, analyse and prepare things."

Sampaoli: Sevilla are happy to be level with Real Madrid

Following his side's comeback win over Real Betis, Sevilla coach Jorge Sampaoli claimed that the victory was extra special as it allowed them to go level with Real Madrid.

With Los Blancos not playing until Sunday night against Villarreal and Barcelona set to take on Atletico Madrid, Sevilla currently sit joint top alongside Real, albeit having played two games more.

The Sevilla tactician was pleased with his side's attitude in overturning a half-time deficit to pick up a 2-1 win at the Estadio Benito Villamarin.

"In the first half, Betis were better than us in all aspects of the game and in the second, we changed it radically because if the game had went the same way, it would have been impossible for us to come back," he told reporters.

"It was a great response from the team and we had a lot of chances. We didn't want to draw and winning brings us a great joy as it puts us alongside Real Madrid at the top of the table, which makes it doubly pleasing."

The Argentine also revealed just what he said to his players in the dressing room at the break in order to get such a reaction from them and answered the question on everyone's lips in terms of their title chances.

"At half-time I told the players that Betis had let us off the hook and we were lucky to only be 1-0 down," he added.

"We were outclassed in a manner that has rarely been seen from us.

"If we ever play again like we did in the first half, then all I can say is that there is no chance of us achieving our goals."

Leicester City forward Jamie Vardy has denied he was involved in the sacking of manager Claudio Ranieri nine months after the Italian led his team to the Premier League title.

After guiding Leicester to one of the most unlikely title victories last year, Ranieri was fired on Thursday with the Foxes mired in a relegation battle. They are now 18th in the table, two points above bottom side Sunderland.

"There is speculation I was involved in his dismissal and this completely untrue, unfounded and is extremely hurtful!" Vardy wrote in an Instagram post on Saturday alongside a photo of Ranieri.

"The only thing we are guilty of as a team is under-achieving which we all acknowledge both in the dressing-room and publicly and will do our best to rectify," he added.

Vardy scored 24 Premier League goals last season to spearhead Leicester's extraordinary triumph after starting the campaign at odds of 5,000-1 to win England's top-flight title for the first time in their history.

"Claudio has and always will have my complete respect! What we achieved together and as a team was the impossible! He believed in me when many didn't and for that I owe him my eternal gratitude," Vardy said.

"I wish Claudio the very very best in whatever the future holds for him. Thank You Claudio for everything."

Vardy's post came after goalkeeper Kasper Schmeichel also denied reports that players led a revolt against the 65-year-old Ranieri who said goodbye to the Leicester squad on Saturday morning.

"There's absolutely no truth in that whatsoever," The Dane told the BBC. "We are players, we can only affect on the pitch and we haven't done that."

Leicester are owned by Thai businessman Vichai Srivaddhanaprabha who is the club chairman.

"What I can say is our owners are very hands on. They are in and around the club. They've been here all the time, they come to practically every game and they speak to all the players regularly," Schmeichel said.

"They're successful businessmen and they're not going to allow themselves to be influenced by any players."

AS Roma strike deal with city officials on new stadium

AS Roma have struck a deal with city officials over building a new stadium in the Italian capital, opening the way for a project meant to boost the Serie A soccer club's revenue.

The 52,500-seat Stadio Della Roma, to be built in the city's south-west, was originally set to open in the current season but has faced years of delays as the club waited for approval.

The agreement, reached late on Friday, marks a welcome victory for Rome's beleaguered mayor, Virginia Raggi, and the anti-establishment 5-Star Movement, whose leadership of the city has been plagued by party infighting, resignations and scandals since winning municipal elections last year.

After inheriting the project from her predecessor, Raggi has been pushing for its design to be changed, including for big parts of a business park planned next to the stadium to be reduced, and for it to be more environmentally sustainable.

"We have always said that we were in favour of making the stadium happen but only within the law and for the good of our city. We have succeeded," Raggi said on her Facebook page, adding the hashtag #UnoStadioFattoBene (#AStadiumDoneWell).

"We have avoided the monster project inherited from the previous administration... a new stadium will be built, but one that is modern, environmentally friendly, technologically advanced and, above all, one that respects much more the environment and the territory."

AS Roma's pursuit of the project follows the example of Serie A leaders Juventus, who became the first top Italian club to own their own ground, having built a 41,000-seat stadium in 2011, instead of relying on the Stadio delle Alpi which they had to share with Torino.

Such purpose-built, modern facilities could help Italy in any future bid to host either a World Cup or European Championship.

The new stadium will also help Roma to raise revenue. The club currently alternate with cross-city rivals Lazio in borrowing the publicly-owned Stadio Olimpico for their games.

"This is somewhat of an historic day not only for Roma, bringing our dream of having a modern infrastructure one step closer, but also for the city as a whole," the club's managing director Mauro Baldissoni said after concluding the talks.

Public ownership of stadiums is common in Italy but leaves clubs unable to modernise their facilities and make money from mega-stores and restaurants, as do clubs such as Manchester United and Bayern Munich. Having their own stadium could also give Roma more control over those attending their games.