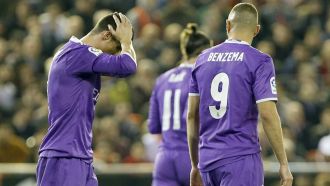 Thursday, 23 February 2017
Real Madrid's latest set-back at the Estadio Mestalla has once again served to prove how difficult it has become in recent years for this star-studded outfit to win the domestic league title.

The Merengues effectively lost the replay of their previously postponed match within the first 10 minutes when Simone Zaza and Fabian Orellana scored in the fourth and ninth minute respectively to seal the three points.

The defeat, which sees their lead cut to just one point over Barcelona but with a match in hand, is a big blow for a side which has not claimed the LaLiga title since 2012 when Jose Mourinho led the side to victory with 100 points to their name.

All up, Real Madrid have won just one title in their last eight seasons compared to Barcelona's six.

And for a side with high hopes of breaking their recent hoodoo, it's a crucial loss which has breathed life into a previously lifeless Barcelona campaign.

More importantly, it's a loss which proves how far Madrid have fallen in recent months, their current form a stark contrast to their memorable unbeaten run.

The start of the match itself was plagued by a series of errors and lapses in concentration which often eventuated in Los Blancos casually giving the ball away and affording their opponents space and time to settle into the match.

The performance of Raphael Varane - arguably one of his worst in the Madrid shirt - lays testament to the side's fragile state where, instead of focusing on the clash at hand, the player's minds were cast off elsewhere.

While Zinedine Zidane's men continued to battle and fight for the remaining 80 minutes, their efforts ultimately proved to be unsuccessful.

There is still a long way to go until the season's end, and Real Madrid can feel it, so they'll desperately need to overturn their lacklustre form if they are to capture the title this time around.

Zidane: Real Madrid were too open and a poor touch really f****d us

Despite fielding a strong starting lineup at Estadio Mestalla, Zinedine Zidane was made to suffer his fifth defeat as Real Madrid coach, a result that he attributed to his team's poor start.

The oft-mocked Simone Zaza gave Valencia the lead with a powerful shot on the turn with just four minutes on the clock, and Fabian Orellana doubled the home side's advantage just five minutes later.

Cristiano Ronaldo scored a towering header just before half-time to make it 2-1, but that was to be the final scoreline as Los Blancos were unable to add to their tally in the second half.

"Real Madrid lost the game because of the first 10 minutes," Zidane admitted in his post-match press conference. "We were too open and a poor touch really f****d us.

"We're all very angry with ourselves for how we started the game. If you are not focused, you get punished. Attitude is important in football," the Frenchman scolded.

"I don't want to take anything away from Valencia," he continued.

"They started well in the first 10 minutes and retreated thereafter, and I have to congratulate them."

One of Valencia's best performers on the night was Italian striker Zaza, and the goalscorer earned plaudits from Zidane.

"Zaza played well between the lines and he hurt us since we left ourselves too open," the 44-year-old insisted.

"We played well with the ball later on and created a couple of chances, but we lacked the final ball."

Zidane was also asked about his decision to substitute compatriot Raphael Varane, who endured a forgettable match.

"I substituted Varane because he suffered a knock," the French boss clarified.

Despite his disappointment, the tactician encouraged his side to focus on the big picture.

"We knew coming into the game that the league wasn't going to be decided today, win or lose," he stated.

"Now we have to rest and think about our next game on Sunday."

Ramos: The defeat is not because of Real Madrid's attitude

It was a missed opportunity for Real Madrid to extend their LaLiga lead at Estadio Mestalla on Wednesday night, although captain Sergio Ramos doesn't believe the team's attitude is at fault.

An early Simone Zaza goal was almost immediately followed up by a Fabian Orellana strike, a one-two punch the Spanish centre-back and his team were unable to deal with.

"The defeat isn't because of Real Madrid's attitude," the defender said. "It was a very intense match and two mistakes at the beginning cost us.

"The match in hand was a good opportunity to extend our lead but our attacking play sometimes requires us to take risks and we lost the ball in dangerous areas on two occasions."

While Barcelona do inch a bit closer, the ex-Sevilla man focused on the positives, as Los Blancos still control their own fate and remain in control.

"We still depend on ourselves to win LaLiga," he continued. "Real are in a privileged position and we must take advantage of that."

The match will serve as a learning experience moving forward, according to the iconic No. 4.

"Last season we put up good numbers, but Real Madrid can't live on the past," he concluded. "Now is the time to learn from our mistakes.

"The squad remains calm because we gave it our all."

Barcelona can become LaLiga leaders at the Calderon

Real Madrid's 2-1 defeat away at Valencia has opened the door for Barcelona to top the table with a win away against Atletico Madrid on February 26 at 16:15 CET.

Meanwhile, Zinedine Zidane's Madrid are also playing on the 26th as they travel to the Estadio de la Ceramica to face Villarreal at 20:45 CET.

While Madrid have a game in hand, a win for Barcelona would put them top by two points and it would add to the importance of the fixture for Los Blancos - even a draw in Madrid would be favourable for Luis Enrique's side thanks to their superior goal difference.

Surprisingly, Barcelona have not topped the table since the opening day after they trounced Gus Poyet's Real Betis 6-2 at the Camp Nou.

Manchester United strolled into the Europa League last 16 despite having Eric Bailly sent off after Henrikh Mkhitaryan's first-half goal secured a resounding 4-0 aggregate victory over St Etienne on Wednesday.

The only negatives in a comfortable win for United were injuries to Mkhitaryan and midfielder Michael Carrick, who could both miss Sunday's English League Cup final.

United will be joined in the next round by Schalke 04, whose 1-1 draw in their last 32 second-leg tie with PAOK Salonika was enough to secure a 4-1 aggregate win, and FK Krasnodar who went through against Fenerbahce.

Krasnodar drew 1-1 on the night to advance 2-1 on aggregate, with the remaining last-32 ties to be played on Thursday.

United manager Jose Mourinho played a strong side including Zlatan Ibrahimovic who scored a hat-trick in last week's 3-0 win over the French side and it did not take them long to effectively kill off the tie.

Juan Mata was given acres of space on the left side of the pitch and the Spaniard clipped a superb low cross into the box for Mkhitaryan to get in front of his marker and flick a low finish into the net.

That left St Etienne needing five goals, a mountain they showed little inclination to climb even after Bailly was sent off in the 63rd minute after picking up two yellow cards in the space of three minutes for fouls on Romain Hamouma.

Mkhitaryan departed with a hamstring problem and Carrick suffered a calf injury, meaning both are doubtful for Sunday's Wembley clash against Southampton.

Mourinho, however, believed it was the right decision not to rest more first-team players ahead of the cup final.

"You can be injured leaving your house or in the garden, you never know why, you always have the risk of it," Mourinho told BT Sport.

"If someone is missing, it is opportunity for another, although not having both for the final is complicated."

Schalke were in pole position against PAOK with a 3-0 first-leg lead and tightened their grip on the tie after 23 minutes when Alessandro Schoepf scored for the second game in succession.

PAOK drew level two minutes later when Matija Nastasic diverted the ball into his own net, but there was no further drama as Schalke comfortably saw the game out.

Krasnodar had won 1-0 at home against Fenerbahce and doubled the aggregate advantage when Fedor Smolov scored with the visitors' first shot of night after seven minutes, before Fenerbahce drew level when Brazilian Souza poked in after a goalmouth scramble.

Juventus close in on quarters as substitutes see off Porto

Porto's downfall was partly self-inflicted after left back Alex Telles received a red card in the 27th minute following two senseless bookings in the space of 90 seconds, leaving the home side to play over an hour against the Serie A leaders with 10 men.

Despite holding Juventus at bay for 72 minutes, Porto's resolve was broken when Miguel Layun deflected Paulo Dybala's pass into the path of Pjaca who slammed a first-time effort past Iker Casillas.

Dani Alves made sure of victory two minutes later when he controlled Alex Sandro's cross with his chest before finishing calmly as Juventus, who are still in the Italian Cup, boosted their hopes of a maiden treble ahead of the second leg in Turin on March 14.

"We can be happy as it's a really good result, but to be honest after the first-half red card, we had to win this game," Juventus midfielder Sami Khedira told BT Sport.

"It's absolutely not over," he added. "We're happy with tonight but in three weeks we'll need to be careful as Porto are angry and have nothing to lose."

Juventus were expected to face a stern test in Portugal, but while they imposed themselves from the early stages and controlled the first half, Porto were content to remain deep and absorb pressure.

The visitors struggled to forge the clear openings that their dominance deserved, although the lively Dybala fashioned the best chance of the first half with a thumping effort from outside the box which grazed the post.

Telles's minute and a half of madness quashed any lingering Porto ambition and prompted coach Nuno Espirito Santo to withdraw striker Andre Silva -- scorer of four Champions League goals this season -- in response.

Juve boss Massimiliano Allegri left out Leonardo Bonucci from the squad, after the pair's dispute during Friday's victory over Palermo, and while Juventus were untested at the back, they missed the centre back's creativity and probing long balls.

The breakthrough eventually came from the bench, as Allegri introduced Pjaca and Dani Alves to offer dynamism and directness and the pair repaid their manager with goals to end Porto's 20-game undefeated home streak.

Incidents: Round of 16 Champions League match that took place at Estadio do Dragão (Oporto) in front of 49,229 spectators.