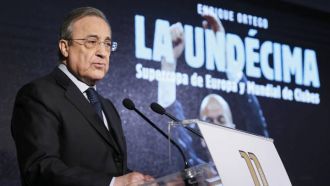 Florentino Perez: The Bernabeu can't host the Copa final due to construction work

Friday, 10 February 2017
Barcelona and Alaves will not be able to play the 2017 Copa del Rey final at the Estadio Santiago Bernabeu as Real Madrid president Florentino Perez has confirmed that there will be construction work taking place that weekend.

Not since 1997 have Los Blancos' rivals played the season's showpiece event at their stadium and the Blaugrana will once again have to play at an alternative location on May 27.

"The final cannot be played at the [Estadio Santiago] Bernabeu because of construction work," the club's president told reporters at an event for Enrique Ortego's book 'The Undecima, UEFA Super Cup and Club World Cup'.

We won't work on transfers until the end of the season," he said.

"We are delighted with Keylor Navas."

A move for the Manchester United keeper was close to being completed in 2015, before failing to meet the deadline.

The Spanish FA's Competition Committee has listed the suspensions that must be served as a result of the Copa del Rey semi-finals, the most notable of which is Luis Suarez's two-match ban.

Sent off for two yellow cards in the final minutes of Tuesday's clash with Atletico Madrid, the Uruguayan did not go straight to the dressing room and watched the rest of the encounter from the tunnel, so has seen his punishment doubled.

"Those who are sent off should proceed directly to the dressing rooms, without watching the rest of the match from the stands," begins article 113.2, the one which the striker broke.

"Failure to comply with this obligation will be subject to a punishment between one to three matches of suspension and an associated fine."

Sergi Roberto and Yannick Carrasco will also be suspended for one match - the final, in the former's case - for their dismissals, while Stefan Savic's booking earned him a one-game ban for yellow card accumulation.

Sergio Busquets' yellow card for kicking a ball away was rescinded given that he did so with another ball already on the pitch.

Atletico Madrid midfielder Oliver Torres is currently on loan at Porto, but the Portuguese side have now exercised their right to buy the 22-year-old.

When the Spaniard joined Porto, a buy-out option of 20 million euros was included in the initial loan and this will be effective from the end of the 2016/17 season.

Former Real Madrid captain Iker Casillas plays for dragons and Torres has become a regular in the starting line-up along with his compatriot, Ivan Marcano.

The move comes after a successful loan spell in Portugal during the 2014/15 campaign, but Torres was unable to break into Diego Simeone's side during his time back in Madrid.

As part of the original deal, Diego Jota was loaned from Porto to Atletico.

De Gea: Nobody knows what the future holds

The future of Manchester United goalkeeper David de Gea remains up in the air, with the Real Madrid target admitting that anything could happen.

Despite failing to sign the Spaniard on the final day of the 2015 summer transfer window, Los Blancos' interest in the shot stopper has been reignited and the 26-year-old was asked about the potential move back to the Spanish capital.

"Nobody knows what the future holds," the player said at a promotional event.

"I am very happy where I am right now and I'm at a great club.

"I'm not going to discuss this issue any further.

"Now is the time to keep focussing on my current club."

For the moment, his attention is on helping Jose Mourinho's side to secure Champions League qualification.

"The Premier League title is in Chelsea's hands, but all teams will fight until the last match," he said.

"Our objective is to finish in the top four."

The Red Devils are currently in sixth place in the Premier League table and have a home match against Watford this coming Saturday.

English soccer club Manchester United is on course to meet its financial targets for 2016-17, it said on Thursday, citing commercial strength that helps to shield it from ups and downs on the pitch.

Net debt, which has been a concern among United fans, was up 27 percent at 409 million pounds at the end of December because of the U.S. dollar's strength against the pound over the year. The underlying debt was unchanged in dollar terms, the club said.

United's accounts were boosted by a 4.8 million pound credit after German midfielder Bastian Schweinsteiger won back a place in the first team squad, United previously having written off his value.

United, whose best known players include Wayne Rooney, Paul Pogba and Zlatan Ibrahimovic, are sixth in the 20-team English Premier League and have reached the League Cup final.

Controlled by the American Glazer family, United are targeting a top four finish under new manager Jose Mourinho to ensure a return to the lucrative Champions League.

Revenue increased by 18 percent to 158 million pounds in the three months to the end of December, with big increases for matchday and broadcast income.

United have won the English league title a record 20 times but have slipped from their own lofty standards since manager Alex Ferguson retired in 2013.

"We want to get into a more steady state where we are buying and potentially selling lower number of players each year. I think we are in that kind of environment now when compared to 2-3 years ago," he said on an investor call.

The club's earnings before interest, tax, depreciation and amortisation (EBITDA) rose to 69 million pounds in the quarter, from 56 million pounds a year earlier.

"Q2 EBITDA is a record quarter profit for the club and a testament of resilience of our business model which allows us to overcome the performance volatility inherent in sports and simultaneously invest in our business for growth," Woodward said.

Expanding its digital operations, the club plans to launch a Manchester United TV app across the globe where competition and partner rights allow.

The club reiterated its revenue target of between 530 to 540 million pounds for the year to the end of June.

Its shares, listed on the New York Stock Exchange, rose 1.6 percent, valuing the business at around $2.5 billion (£2 billion).

Bundesliga leaders Bayern Munich haven't set off any fireworks with their performances this season, but coach Carlo Ancelotti is confident the best is yet to come, starting at Ingolstadt on Saturday.

The Bavarians have been more a model of efficiency under the Italian than the high-scoring, high-speed freight train of past seasons under predecessor Pep Guardiola.

Their 1-0 nervous victory over struggling VfL Wolfsburg in the German Cup round of 16 on Tuesday was indicative of their current form. They can control the game and dominate possession, but they will not necessarily make their advantage count.

Bayern have won three of their four matches in all competitions so far in 2017, all by one goal. They drew last week's home game against Schalke 04 1-1.

"You cannot accuse the team of not being fully engaged," Ancelotti said.

"But it is clear the team lacks a bit of confidence at the moment. It is not always easy to flick the switch. My players have understood that we need to be more compact on the pitch."

"I think now that we have more games we will improve."

After Ingolstadt, Bayern host Arsenal in their Champions League round of 16 on Wednesday before travelling to ambitious Hertha Berlin, who are battling for a champions League spot.

Captain Philipp Lahm, who said this week that he will retire at the end of the season, warned that Bayern need to get better quickly or risk losing out on silverware this season.

"The team needs to know that if we play in the coming weeks as we have done, then we will be out of every competition very quickly," Lahm said.

Bayern's form has given some hope to Ingolstadt, struggling to avoid the drop.

"If you look at Bayern's last few matches then you know that we are not afraid of them," Ingolstadt's Alfredo Morales said. "We have always come close to beating them."

Champions Bayern, chasing a record-extending fifth consecutive league title, have extended their lead at the top to four points thanks partly to a slight dip in form by second-placed RB Leipzig.

"Maybe we have not yet reached our top level but what is certain is that this team has a lot of potential," said Bayern defender Javi Martinez. "In all the games that were tight the team showed it is there when it matters."

Leipzig, who have lost three of their last six league matches, need to beat Hamburg SV, brimming with confidence following two straight wins in league ands German Cup matches, if they are to stay on Bayern's tail.

Dietmar Hamann believes the whole mentality at Liverpool must change if they are to achieve success.

Liverpool are in desperate need of a "reality check" if they are ever to match their success of the past, according to former midfielder Dietmar Hamann.

Jurgen Klopp's side have won only one match in 2017 - an FA Cup replay against Plymouth Argyle - and are without a victory in their last five Premier League matches.

Liverpool started the campaign in impressive fashion but their desperate run of form has seen them knocked out of both domestic cup competitions and drop out of the top four.

And Hamann, who won the Champions League and two FA Cups in a hugely successful spell at Anfield, has slammed the club as a whole for believing the hype around the team.

Perception is not reality

"The biggest problem is what people within the club - including the players - perceive Liverpool to be and where they actually are," he told Paddy Power's football blog.

"There's a huge gap between that perception and reality. Klopp has to fight to change the mentality - not only in the team, but in the whole club. Everyone needs to work 100 per cent harder to get Liverpool back to where they were.

"Part of the problem is the club creates so much interest all over the world, people still seem to think that they're still one of the driving forces in Europe - which they're not.

"The reason the club still attracts interest is because the guys in the 1970s and 1980s were unbeatable. That's got nothing to do with the current crop of players and that's not what has happened in the last eight to 10 years. If you look at the facts of that period it's been pretty dire.

"The club needs a reality check on whether everything that's being done is as it should be.

"I'm not saying the owners didn't back Jurgen Klopp because he was given some money to spend, but the mindset within the entire club needs to change. That filters down to the team. They've put in some fantastic performances away to Arsenal and Chelsea, but then they get beat by Hull, Burnley and Wolves.

"Sometimes the club and the team believe their own hype. You've got to be consistent. It doesn't matter whether you go 10 or 20 games without losing. If Liverpool don't finish in the top four and have no trophy to show at the end of the season - it's a disappointment. End of.

"Before Christmas a lot of people had them down as one of the Premier League favourites. It's hard to explain the bad run that's followed. You can lose games of course - most teams have dips in a season - but to have such a period of disappointing results is unacceptable.

"Complacency is the biggest issue the club faces at the moment. People believe 'we are Liverpool, we are going to be alright'. No, they're not alright because a lot of people within the club think that if you give the manager a four-year extension it gives off the perception that things are great, when they're not.

"The manager needs to look hard at the team, but there needs to be a thought process throughout the whole club if they want to maximise what's possible with the players that they've got."