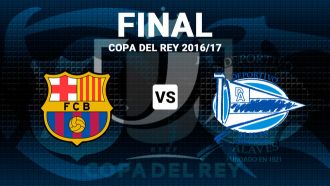 Thursday, 09 February 2017
A late goal from Edgar Mendez earned Alaves a dramatic 1-0 win over Celta on Wednesday night at Mendizorrotza in Vitoria and a date with Barcelona in the final of the 2016-17 Copa del Rey final.

Just minutes after coming on for Gaizka Toquero, Edgar Mendez scored in the 81st minute to send Alaves to their first final since their dream run to the 2000-01 UEFA Cup final.

It was another tight encounter between the two sides, but Alaves' attacking impetus proved to be the difference and now the newly promoted club will get a shot at holders Barcelona in the final this May.

Bolstered by a boisterous home crowd, Alaves showed the more ambition of the two sides, but it was Celta who almost struck first when Iago Aspas did extremely well to slip past Manu Garcia deep in the Alaves area, but the former Liverpool man shot wide of the far post. Alaves' first chance would then arrive via an Ibai Gomez free kick curling just over the crossbar.

Just like in the first leg, the crafty Aspas was a major headache for the Alaves defense and some alert play from the Celta man almost score with a long-range chip after an Alaves error. At the other end, Gomez was the dangerman for Alaves, regularly taking on two or three Celta defenders and keeping Celta goalkeeper Sergio Alvarez on his toes.

Still, after three halves of play between the two teams, not a single goal had been scored. Alaves looked to change that at the start of the second half and were the more aggressive of the two sides. The Basques were looking to play into Deyverson and pressed numbers forward. Celta's ploy was to play the counter and when on the break the Galicians found space with which to work.

Sergio became much busier in the Celta goal in the second half and he had to react quickly on an Ibai Gomez shot to keep things scoreless as the match drifted into the final half-hour. Moments later Deyverson wasted a golden opportunity to break the deadlock by firing over the crossbar after being played in by Camarasa.

Pacheco was forced action as well in the Alaves goal and a fine Celta build-up ended with a Wass header that tested the home stopper.

But there was always the sense that an Alaves goal was coming and inside the final 10 minutes substitute Edgar Mendez, who had just come on for Toquero, produced the necessary moment of magic. Camarasa beautifully flicked a header into the path of Edgar, who then Cabral, Hugo Mallo and goalkeeper Sergio before slotting home for the 1-0 lead.

Celta's only choice was to go all offensive in the final minutes in search of an equaliser. Manager Eduardo Berizzo brought on John Guidetti and Giuseppe Rossi, but a late miracle was not to be had, denying the Vigo club a shot at winning their first trophy while earning Alaves their first ever domestic final.

Alaves' first final since losing to Liverpool in the UEFA Cup

A member of one of the most memorable European finals since 2000 now has a spot booked to face Barcelona in the Copa del Rey showpiece event, marking a triumphant return to the footballing elite 16 years later.

Alaves faced Liverpool in the 2001 UEFA Cup, and although they ended up taking a defeat, they did so with so much dignity that they are remembered for it years later.

Steven Gerrard and Michael Owen led the Reds on the day in the highscoring affair.

The Basque side have never won a major trophy before, leaving aside the Copa Federacion they were awarded in 1946 and several second and third division league titles.

On May 27, Barcelona and Alaves will play an unprecedented final in the Copa del Rey history, given the stark realities of each of the two clubs.

The Vitoria-Gasteiz team, which has won 1-0 against Celta Vigo, is set for the first time in its history to be part of the final, whereas it'll be the 40th final for Barcelona.

The difference is not only based on the pitch itself but also in economic terms.

Indeed, Alaves has presented a budget of 49.3 million for the current season - an important amount for a team that last season was playing in Segunda Division.

On the other hand, Barcelona made public its budget of 695m, two per cent higher than last season and the highest in all its history.

The difference between the two it's on those 646m.

A first taste of the big final in May will take place on Saturday afternoon when Alaves host Brcelona in Week 22 of LaLiga.

It will be undoubtedly a different match but Vitoria is still celebrating after reaching the dream of playing the final - it could be also a revenge to the 2001 loss in the UEFA Cup against Liverpool.

Each season, the venue for the final of the Copa del Rey is debated and 2016/17 is no different.

Barcelona have already qualified for the final after their victory over Atletico Madrid in the semi-final stage and will face either Celta Vigo or Alaves.

The Estadio Santiago Bernabeu is one ground which Barcelona would be happy to contest the final at.

It has the highest capacity of any stadium which would be suitable for the showpiece, while Madrid has enough accommodation options for supporters making the trip to support their side.

The other option is also in the Spanish capital, with Atletico's Estadio Vicente Calderon being touted as a possible option in its final season before the club move to the Estadio Wanda-Metropolitano.

"The club are doing the necessary paperwork to hopefully host the final," Rojiblancos president Enrique Cerezo said last month, prior to his club's elimination.

To keep his squad on its toes, Real Madrid coach Zinedine Zidane isn't taking the two matches his team have in hand into consideration when planning the rest of the league campaign.

With the match against Celta cancelled due to stormy weather, it has been a chance to regroup for the French coach, and he'll have appreciated the extra time on the training pitch and reduced match load on his player's legs as the important part of the season quickly approaches.

The time away from the headlines will have allowed the Real boss to strategise and plan the rest of the season, and as such, the debate over whether the match should have taken place doesn't interest the French boss.

The two matches against Valencia and Celta don't even exist in Zizou's eyes, as instead he is preferring to emphasise the upcoming match against Osasuna.

For Madrid to remain at their most dangerous and their best, they mustn't get ahead of themselves, and keeping those two games in hand out of mind will go a long way in ensuring they keep their focus on the present.

Borussia Dortmund beat Hertha Berlin 3-2 on penalties to reach the German Cup quarter-finals on Wednesday after the match finished 1-1 after extra time.

Dortmund, who were reduced to 10 men late in extra time after Sokratis Papastathopoulos was sent off for dissent, were better from the penalty spot as three Hertha players failed to score.

Dortmund's Pierre-Emerick Aubameyang and Hertha's Vedad Ibisevic both had golden chances in the first half, before Salomon Kalou volleyed Hertha ahead in the 27th minute.

Marco Reus drew the hosts level three minutes into the second half after Ousmane Dembele's shot bounced off the post.

In a one-sided second half Dortmund should have won it after creating several clear scoring chances.

They were reduced to 10 men when Papastathopoulos was booked twice in quick succession, leaving the pitch in the 119th minute.

The hosts, however, kept their cool in the shootout before Kalou fired his penalty high over the bar to send Dortmund into the next round.

Schalke 04 eased past second division Sandhausen 4-1 while holders Bayern Munich edged past VfL Wolfsburg 1-0 to book their spot on Tuesday.

An 89th minute winner from Mario Pasalic gave AC Milan an unlikely win over Bologna, after the Rossoneri had two men sent off.

Gerard Deulofeu provided the spark needed by Milan as he skipped past Domenico Maietta to slide the ball to the unmarked Pasalic, who tapped home from close rage.

Things weren't all rosy for the away side as Gabriel Palletta was given his marching orders 37 minutes in after collecting two yellow cards, and just before the hour he was joined by Juraj Kucka who managed the same feat.

Ladislav Krejci, Mattia Destro and Simone Verdi were all guilty of wasting good chances for Bologna, and Gianluigi Donnarumma made a fine reaction save from Krejci to keep his team in the game.

Deulofeu almost accidentally scored from a corner, but his set-piece struck the crossbar, though it wasn't long after that be provided the assist for Milan's winner.
Email : [email protected]
Προηγούμενο : Nadal: Of course I'd like to be Real Madrid president | Επόμενο : Florentino Perez: The Bernabeu can't host the Copa final due to construction work
Προβολές : 447
- 3367 προηγούμενη ημέρα