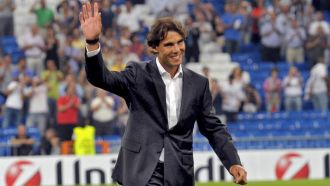 Nadal: Of course I'd like to be Real Madrid president

Wednesday, 08 February 2017
It is never clear what the future has in store and tennis star Rafa Nadal has admitted he'd like to be president of Real Madrid someday.

The 2017 Australian Open finalist loves football too, and Real have always been his team.

"Of course I'd like to be Real Madrid president," he said. "You never know what'll happen in the future.

"Anyhow, we have a great president now and I don't think Real Madrid will need me."

Luis Suarez: I laughed as you could see my sending off coming

Barcelona progressed to the Copa del Rey final by holding off Atletico Madrid, but they lost Luis Suarez for that match as he will serve a suspension for a red card that he wasn't surprised about.

The angry Uruguayan criticised referee Jesus Gil Manzano, suggesting that the official wanted him off the park before he showed the player a second yellow in the final minute.

"I laughed at my sending off, which you could see coming," the centre-forward told Gol TV after the full-time whistle.

"Whatever [the referee] wanted to happen has happened.

"The second yellow card wasn't even a foul.

"As usual, the referee didn't gave me any explanation."

Discussing the 90 minutes as a whole, the striker was not surprised that Atletico made life difficult for the Blaugrana, with Los Rojiblancos just one goal away from forcing extra time.

"We were aware that it would be difficult and we knew that we would have to suffer to reach the final," the 30-year-old said.

Barcelona now await the outcome of Alaves and Celta Vigo's second leg to see which opponent they'll take on in the final.

Luis Suarez has become Barcelona's 14th highest goalscorer of all time after helping the side secure a place in the Copa Del Rey final with a 3-2 aggregate victory over Atletico Madrid at the Camp Nou.

The Uruguayan international endured a mixed performance after opening the scoring late in the first-half when a Lionel Messi strike was parried to the feet of the 30-year-old by Miguel Angel Moya for a simple tap-in before being sent off on the 90th minute.

Nevertheless, Suarez's goal marked his 107th strike in all competitions since joining the club in the summer of 2014, equalling with former striker Jose Antonio Zaldua in the process.

To put things into perspective, only Athletic Club, Real Betis and Valencia have conceded more at the hands of the talisman.

Atletico Madrid may have been knocked out of the Copa del Rey on Tuesday night, but Koke insisted that his teammates should be pleased with the way they played at the Camp Nou.

Needing to overturn a 2-1 first leg deficit, Los Rojiblancos pushed Barcelona back throughout the match and were one goal away from forcing extra time.

"It's something to feel proud of," the midfielder stressed after the final whistle.

"[We should feel proud of] all of the effort that we put in, both in today's match and in the first leg, particularly in the second half.

"We deserved more, but we have to congratulate Barcelona, a great team who also deserve it."

Reflecting on the mood when Luis Suarez opened the scoring in the first half, the 25-year-old explained that his own side's gameplan didn't change much.

"We knew that if they scored a goal that it was still the same situation for us, that we needed two," Koke said in his post-match interview.

"We had chances, but that's football and we must be proud.

"We gave a good account of ourselves, as we have always done, and nothing about today's [performance] can be criticised."

Los Rojiblancos now look ahead to their LaLiga clash against Celta Vigo this coming Sunday.

Hints of Klopp and Dortmund for Simeone at Atletico

There once used to be a correlation between how feverishly Diego Someone waved his arms and how well Atletico Madrid played. It was at least linked to the urgency and intensity they played with, often prompted by the Argentine's orchestration of the Vicente Calderon crowd. That correlation now looks to be somewhat fragmented, though.

This season certainly won't go down as a vintage Simeone season. He might have enjoyed unprecedented success over six years in charge of Atletico Madrid, but his influence at the club looks to be on the wane. Fourth in La Liga, seven points adrift of Real Madrid (who also hold two games in-hand) and a Copa del Rey exit to Barcelona on Tuesday night, the Simeone success story at Atleti might be nearing its conclusion.

Many drew that verdict a number of months ago, but the counter point was always made that Simeone - the godfather of Atletico Madrid in their modern form - would surely stay for the move to the Wanda Metropolitano. But by staying that long the Argentine might actually be doing more harm than good.

He must look to Jurgen Klopp for a precedent. The German is credited with turning Borussia Dortmund into the European superpower they are now, with Klopp's personality becoming intertwined with that of the Bundesliga club. It's the same for Simeone at Atletico Madrid. They reflect each other.

But in his final season at Dortmund Klopp became more of a hinderance than a help. His final campaign in charge of the club was nothing short of a disaster, with more than a few holes appearing in the Yellow Wall. It was in the best interests of both the club and the coach that they go their separate ways.

Now, Dortmund have been rejuvenated by Thomas Tuchel, re-establishing themselves as Germany's second force and rediscovering the enjoyment that had been lost in Klopp's final season at the club. There is a growing sense that not just for the benefit of Simeone, Atletico Madrid might need to make a change for their own good as well.

Simeone and Klopp are, broadly, one of the same. They are managers forged from the same mould, possessing many of the same characteristics and traits. Of course, their archetypal style of football might differ rather greatly, but in terms of their personalities and ethos as coaches the two men are at least comparable.

It's for this reason that a parting of ways represents such a gamble. Dortmund could feasibly have been left without an identity following the departure of Klopp, in the same way Manchester United struggled in the years after Sir Alex Ferguson's retirement. Atletico Madrid find themselves at a similar juncture upon contemplating a post-Simeone age. It will be understandably wrenching to throw themselves off the jumping off point.

Then there's the personal side of things to consider. Klopp might have struggled over the past month or so at Liverpool, but up until the new year he had looked revived by the challenge of waking up one of English football's sleeping giants. Leaving Dortmund has sustained him as one of the best in Europe. Simeone also needs a new challenge, whether that be at Inter Milan, where it seems inevitable he will one day end up, or in the Premier League.

Atletico Madrid have shown over the course of the 2016/17 season that they are no longer a Simeone side in spirit. They no longer possess the hallmarks of the Argentine's coaching style - they are no longer solid at the back, impenetrable from set-pieces or mentally toughest when it matters most.

Dortmund and Klopp demonstrated how to executive the perfect breakup, with both parties now better off doing their own thing. No matter what happens from this point on, Simeone will go down as an Atletico Madrid giant. He is the architect of the club as it is in 2017, but it might be time for him to leave his masterpiece behind for someone else to renovate.

Bayern captain Lahm to retire at end of season

Bayern Munich's Philipp Lahm, who captained Germany to their 2014 World Cup victory, will retire at the end of the season a year before his contract with the German champions expires, the 33-year-old defender said on Tuesday.

Youth product Lahm, who has played 501 matches for Bayern since his senior debut in 2002, said that while he could continue playing at the top level to the end of this campaign he would not be able to keep doing it.

"I will end my career at the end of season," Lahm told reporters after Bayern's German Cup last 16 win over VfL Wolfsburg. "I have informed club officials about my decision.

"I can continue with my leadership style, giving my best every day, in every training, until the end of the season. I can keep doing it this season but not beyond," he said.

Lahm is among Germany's most successful players of all time, having won almost every trophy with club and country, including seven Bundesliga titles, the Champions League and the World Cup.

The diminutive defender was one of the world's best fullbacks for the better part of a decade, moving into a midfield role more often in recent seasons.

Lahm, who retired from internationals after Germany's World Cup victory in Brazil, came through Bayern's ranks before spending two seasons on loan at VfB Stuttgart between 2003-2005.

He can still add more silverware to his huge collection this season with Bayern also top of the Bundesliga and facing Arsenal in the Champions League last 16.

Leicester City said on Tuesday that Claudio Ranieri would be given the opportunity to turn things around at the relegation-threatened Premier League champions.

Ranieri has come under pressure since Leicester's stunning title triumph last season, with the club battling relegation near the foot of the league table, a point above the bottom three after 24 games.

"Leicester City Football Club would like to make absolutely clear its unwavering support for its First Team Manager, Claudio Ranieri," the club said in a statement on Tuesday.

Ranieri has played down recent media reports suggesting he has lost control over his dressing room.

"While there is a collective appreciation from everyone at the club that recent form needs to improve, the entire club is and will remain united behind its manager and behind its players, collectively and firmly focused on the challenges ahead," Leicester said.

Ranieri said he hoped the statement would end speculation about his future with Leicester.

"I think (the statement) is for the media. I know the views of the chairman. Maybe he wanted to stop all the speculation. I didn't ask them to do this -- I knew what the chairman was thinking," he told reporters on Tuesday.

Leicester, who are on a four-game losing run in the league and have won just twice in their last 15 top-flight games, host second-tier side Derby County in the FA Cup on Wednesday before a trip to face relegation rivals Swansea City four days later.

Aguero, the club's top scorer with 18 goals in 26 games this campaign, has been confined to the bench in recent weeks to watch the emerging young Brazilian.

"He (Aguero) will be okay. He's a mature guy. It's not the first time he's been dropped. We need a strong squad to win titles. Football is like this," Zabaleta told British media.

The 19-year-old Jesus has scored three goals and provided two assists in his four games since arriving from Brazilian side Palmeiras last month.

"Especially with the big squads, where you have more than one big player in each position. And of course, Sergio has been playing for most of the years as first choice. Now we have Gabriel Jesus," Zabaleta said.

"I think it's good to have two players with that quality. It's always good to have healthy competition in the team - you know you have to perform well to keep your place in the team and that's normal for the big squads."

City, who are third in the Premier League, 10 points behind leaders Chelsea after 24 games, travel to face 14th-placed Bournemouth on Monday.