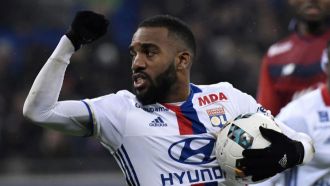 Monday, 06 February 2017
Lyon and France star Alexandre Lacazette has said that LaLiga club Barcelona had hoped to capture his signature during the previous summer transfer window.

It is no wonder why the Catalan club wanted the 25-year-old; Lacazette bagged 21 goals for the French outfit last campaign and is already near to that total this season, having scored 18 times in Ligue 1.

"I think this summer is the time to freshen up my atmosphere and see something else," the attacker told Canal Plus on Sunday. "I think the time has come to progress in football."

Lacazette confirmed in the interview that his friend and international colleague, Samuel Umtiti, asked for him to come to Catalunya at the beginning of the season, but in the end he was left disenchanted by the lack of first-team football at the Camp Nou.

Aguero: I have to help Manchester City for the rest of the season, then we'll see

Manchester City hailed the crowning of their new hero on Sunday as Gabriel Jesus led them to a win over Swansea City, leaving Sergio Aguero's future in doubt.

Pep Guardiola dropped the Argentine and Jesus' brace led to questions for his teammate, who sought to push back any talk of a move to the summer.

"No, no," Aguero replied when asked whether he was considering an exit. "I have to help the team as much as I can in these three months.

"Afterwards we'll see what the club wants to do with me.

"I have three months to do my best and and try to help the team, and we'll see what happens with my future.

"Sometimes this happens. When you're on the bench you have to wait for your opportunity."

Queries also came the forward's way regarding a meeting between coach Guardiola and Aguero's agent, the duo having dinner a few weeks ago to spark speculation over his future.

"It was private things that have to stay inside those walls," he asserted. "Things to do with the club, [in] private."

Neymar at 25: One more goal than Messi, 118 more than Ronaldo, no Ballon d'Or

As Neymar celebrates his 25th birthday, it is interesting to compare his achievements with those of Lionel Messi and Cristiano Ronaldo at the same age with the Brazilian winning out in terms of goals.

Neymar is currently in his finest form of the season so far and his display against Athletic Club on Saturday was a testament to the footballer he has turned into since arriving at the Camp Nou.

Providing an assist for Paco Alcacer's opening goal, he co-led the team in an attacking sense alongside Lionel Messi.

Despite still being in its relative infancy, Neymar's career is already wondrous with the forward having won a Champions League, two LaLiga titles, two Copa del Reys, a Copa Libertadores as well as an Olympic Gold Medal.

The only thing that Neymar lacks is a World Cup and a Ballon d'Or, and the former will see him shoot past Messi and Ronaldo in that regard.

Neymar is not the star of Luis Enrique's Barcelona, Lionel Messi is and he has been for over a decade, this shows when you compare the individual awards won by the pair.

At 25 the Argentine had already won three Ballon d'Ors, three Champions Leagues and five LaLiga titles whereas at the same age Ronaldo had earned one Ballon d'Or and three Premier League titles.

On the pitch Neymar trumps both in terms of goals scored, however, although how much is down to the system he is playing in is difficult to judge.

The former Santos starlet has scored one more time than Messi had by age 25 and 118 more than Ronaldo although the Portugal captain had spent that time playing in the Premier League.

Neymar has managed 280 goals in 468 matches for all clubs in all competitions as well as his national team whereas Messi had 279 in 405 appearances.

What is clear however is that Neymar's career will outlast both Ronaldo and Messi's, or at least it should in theory, as he will have his opportunity to get his hand on the famed Ballon d'Or trophy.

This may even come sooner than anyone may think with the forward set to lead Brazil into the 2018 World Cup in Russia. If he was to secure that title, he would surely be at the forefront for the award.

Perhaps a birthday cake will be enough consolation for a Cristiano Ronaldo who was able to turn 32 in the presence of his family, rather than the Estadio Balaidos faithful.

Naturally the winger would have preferred to be in action for Real Madrid in their quest to win LaLiga but Sunday night's postponement allowed other matters to dominate his attention.

In any case, Ronaldo still got his footballing fill by captaining a Los Blancos XI to a 6-1 win over his teammates in an intra-squad friendly arranged by Zinedine Zidane.

A chance for Fernando Llorente to swap battling relegation for leading the Premier League came the striker's way in January, and although it fell by the wayside, he accepts the club's decision.

Potentially moving on loan to Stamford Bridge, the Spaniard has since acknowledged that leaving the Swans high and dry halfway through the campaign was a situation that the Welsh outfit couldn't accept.

"I already know [Chelsea coach Antonio] Conte from Juventus," Llorente told reporters after Swansea's loss to Manchester City. "But it's difficult in the winter when there's a way out from a side you're playing for and it's normal that they didn't go ahead with the deal.

"I'm very focused on the team and am looking forward to helping save us from relegation.

"The last few games I've been happy with as we've gotten away from the bottom. It will be a very tough fight, though, and we hope to get further ahead when we face Leicester in a final next Sunday."

The Yellow Submarine earned a 0-0 draw at the Estadio Ramon Sanchez Pizjuan but only after Samir Nasri squandered a chance to claim the points from the penalty spot.

"We couldn't make the most of our chances across the 90 minutes and our opponents set up with an extremely defensive approach," the Argentine professed to the media post-match. "But we were not forceful enough and couldn't claim the points.

"The most important thing we did today was take charge of the game from the first whistle, and I think we deserved a bit more."

Now three points off Real Madrid, who have two games in hand, Sampaoli must prepare his side to go again when they face Las Palmas next time out, a team yet to experience defeat at home this LaLiga season.

"We obviously have to think about the next game," he added.

"But we certainly wanted to avoid [drawing]. We wanted to win to make up for the loss last Sunday.

"I'm satisfied with the team's attitude because we stood up against a rival without fear of the consequences, seeking a goal from the first second to the last."
Email : [email protected]
Προηγούμενο : LaLiga confirm Celta-Real Madrid postponement | Επόμενο : Real Madrid hit back at Vigo mayor's 'inaccurate' statements
Προβολές : 389
- 2840 προηγούμενη ημέρα