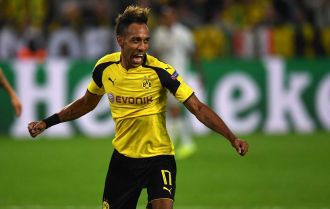 Aubameyang: I need to leave in the summer

Wednesday, 01 February 2017
Confessing he wants to leave Borussia Dortmund in the summer, striker Pierre-Emerick Aubameyang has opened the door for Real Madrid.

The Gabonese player, who has scored 20 goals in 23 games for BVB this season, has been in the sight of the top European clubs, including Real, and later on Tuesday, the 27-year-old, who has returned to Germany after his country's elimination from the Africa Cup of Nations, declared he wants to move in the summer.

"I am reflecting on whether or not to leave the club next season," he told Radio RMC.

"Should I leave? That is the question I am asking myself and I have no answer. It takes time.

"If I want to go to the next level, I need to leave in summer.

"But we must see the proposals and if I'm going to play.

"Real Madrid is still a dream, but there has been too much noise too."

Simeone: When things happen to Real Madrid or Barcelona they have more impact

Claiming that there is more of a furore given when one of Spain's 'big two' was impacted, Atletico Madrid coach Diego Simeone weighed into the video technology debate on Tuesday.

There has been a greater outcry and calls for technological assistance for referees after Barcelona weren't awarded a clear goal during their 1-1 draw at Real Betis.

Ahead of his side's clash with the Blaugrana, Simeone offered his opinion on the hot topic.

If things happen to Real Madrid and Barcelona then they have more impact and people want to find solutions," Simeone told reporters.

"However, that does make me happy because if Barcelona hadn't been harmed then there wouldn't be calls to find a solution in future and that is a good thing for everyone."

With the Catalans very much next on the agenda for the Argentine and his side, he was hesitant to agree with the sentiment that Atletico always lift it against the Blaugrana, concentrating only on getting the best of them in their Copa del Rey showdown.

"I don't think that it is true that we are always at our best against them," Simeone added. "Our intention is to give our best in every game.

"The group are working hard and are looking very good. We have had an irregular season so far but our state of mind is very clear.

"I don't know what is going to happen on Wednesday. All I know is that we are going to face one of the best teams in the world who have three of the best players, capable of deciding 80 percent of their games."

Simeone also addressed the situation around attacker Yannick Carrasco, who threw quite the tantrum upon being substituted at Alaves.

Despite the Belgian kicking water bottles to show his frustration, Simeone absolved him of any wrongdoing, insisting he was pleased to see the player's passion.

"When players get angry, that actually makes me happy," he said. "I guess the first thing is that they are angry with themselves because they haven't had a good game.

"Secondly it might be directed at the coach for taking them off but that is something that has never bothered me."

Luis Enrique: Everything hinges on Barcelona scoring at the Calderon

After the controversy over the weekend, Luis Enrique is ready to focus on the actual football in the days ahead by looking closely at the Copa del Rey semi-finals against as difficult an opponent as Atletico Madrid.

The Barcelona coach defended his rotation policy, spoke of VAR's role in the future of football, and everything the tie would have on offer.

"Everything hinges on us scoring at the Estadio Vicente Calderon," Luis Enrique said. "We'll have to overcome their high press.

"I don't know if having the second leg at home is an advantage or not, better to ask Diego Simeone that question.

Inevitably, the Blaugrana boss was asked about goal-line technology and whether it should be implemented, despite the coach not commenting on it much after the Betis match itself.

"We have to be careful to differentiate between VAR, which is substituting a referee's decision and I'm not in favour of, with the use of technology like goal-line tech that can help referees," the Asturian pointed out. "You wouldn't lose any more than a few seconds."

"VAR you'd really have to analyse, as I can't imagine stoppages of play every time there is an offside, foul, or throw in."

The two teams have faced off several times during Cholo and Lucho's tenures, which means it will be difficult to catch the opponent off-guard and use the element of surprise.

"I don't envision Simeone making a lot of changes and neither will I," Luis Enrique said. "We will, however, incorporate little nuances that can prove key, several of which we've analysed by looking at past matches.

"Who knows if this will be the last time we face each other?" he concluded, with both coach's futures still very much up in the air.

Sutton United is a team with a lot of character, whether it is their giant back-up keeper Wayne Shaw or their vape-smoking coach Paul Doswell taking a puff on the sidelines.

In the modest fifth division, it was a historic cupset on the weekend that set up the clash with Arsenal in the FA Cup, as they aren't even a professional side.

Sutton United shockingly defeated Leeds United 1-0 in the fourth round to earn their spot against the Gunners.

Manchester United will field their strongest side at home to Hull City in the Premier League on Wednesday despite manager Jose Mourinho's concerns over their congested fixture list.

"We always play a full strength team, it depends on the way you look at it but we always try to have a strong team," Mourinho told reporters on Tuesday having last week complained about the club's crazy fixture list.

Wayne Rooney, who this month became United's all-time top scorer to match his England achievement, has reportedly been offered a lucrative deal by a Chinese Super League club but Mourinho said his captain will not go anywhere this season.

Asked if Rooney would be staying until the end of the season, Mourinho said: "Yeah... We already lost two players (Memphis Depay and Morgan Schneiderlin) from the squad".

The Portuguese coach, who also confirmed that Ashley Young will not be leaving the Old Trafford club, suggested he had already drawn up his transfer plans for the close season.

"We're more focused on the summer period... If you ask me do I know what I want for the next transfer window? Yes I know. Is it possible to get? I'll try, always, to be realistic," he said.

United, who are still competing in the League Cup, FA Cup and Europa League, are sixth in the Premier League with 41 points while visitors Hull are second-bottom with 16 points.

But Mourinho's side won't underestimate the Tigers, who last week ended United's 17-game unbeaten run in all competitions with a 2-1 win in a League Cup semi-final, second leg. United went through 3-2 on aggregate and will face Southampton.

Manchester City manager Pep Guardiola has defended Fernandinho as the Brazilian midfielder prepares to return to the side following a four-game ban.

Fernandinho was sent off for the third time in his last six appearances during City's win over Burnley this month but returns to the squad for the Premier League game at West Ham United on Wednesday.

"He's so important and I am happy he's back. He's not aggressive. He's a tough intense player. He is one of the nicest guys I've met," Guardiola told reporters on Tuesday.

City missed Fernandinho in a 4-0 drubbing at Everton and a draw against Tottenham Hotspur which left them 12 points behind league leaders Chelsea. They did, however, win 5-0 at West Ham in the FA Cup third round.

"What happened against Chelsea we have talked a lot about. What happened after happens many, many times. We accept the ban, don't complain, but he's not aggressive, he's honest," Guardiola added.

Sevilla's French midfielder Steven N'Zonzi has signed a one-year contract extension to keep him at the Sanchez Pizjuan stadium until June 2020.

Sevilla are third in La Liga, four points adrift of leaders Real Madrid, and face Leicester City in the last 16 of the Champions League.

During that time, he played 73 matches, in which he scored 7 goals and became UEFA Europa League champion, under coach Unai Emery's orders.
Email : [email protected]
Προηγούμενο : Dybala becomes a genuine option for Real Madrid | Επόμενο : Luis Enrique: The match could've been better, but it could've been worse
Προβολές : 422
- 2632 προηγούμενη ημέρα