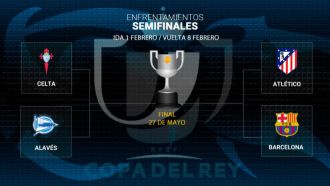 Saturday, 28 January 2017
Holders Barcelona were drawn with 10-times winners Atletico Madrid in the King's Cup semi-finals on Friday and Celta Vigo will play Alaves in the other tie.

Atletico host Barcelona in the first leg on Feb. 1 with the second leg at the Nou Camp on Feb. 7.

Barcelona have won the Cup a record 28 times and have lifted it in the last two seasons under coach Luis Enrique, who said this week his ideal final would be against his former club Celta.

"They (Barca) are one of the best teams in the world so it's going to be a great tie and the games will be very tough. The tie will be decided by details, especially concentration, which we'll need if we're to go through," Atletico midfielder Koke said.

Barca knocked Atletico out of the Cup at the quarter-final stage in 2015 4-2 on aggregate following an action-packed second leg in which Diego Simeone's side were reduced to nine men.

"It's vital we score at their place in the first leg. It's so evenly matched and we're going to have to put in two huge performances because Atletico always demand the maximum from you," Barca defender Sergi Roberto said.

Barca beat Real Sociedad 6-2 on aggregate to advance to the last four while Atletico saw off Eibar 5-2. Alaves beat Alcorcon 2-0 on aggregate and Celta knocked out La Liga leaders Real Madrid 4-3 on aggregate.

Celta have reached the final three times but never won the trophy.

They entertain Basque side Alaves, the 2001 UEFA Cup finalists who are bidding to reach their first King's Cup final, in the first leg on Feb. 2.

The final is on May 27 with the venue still to be determined, although Spanish media reported it will be at Atletico's Vicente Calderon, which is set to close at the end of the season.

Simeone: To win the Copa you must beat Barcelona or Real Madrid

Speaking at a press conference ahead of Atletico Madrid's LaLiga fixture with Alaves on Saturday, Diego Simeone reacted to drawing Barcelona in the Copa Del Rey semi-finals.

Highlighting the need to beat the top teams to win trophies, Simeone said that facing Barcelona is a normal thing in the competition.

"If you want to be champions you have to beat Real Madrid or Barcelona, it's just normal," said the coach.

"It's routine to have to face the top teams, it's part of the road to the title."

Los Rojiblancos face Alaves on Saturday in their next LaLiga installment, but Simeone says he is not underestimating coach Mauricio Pelligrino, who he believes has been key to their success.

"You have to understand the coach's value added to the team and the role he took to form their first team," said the Argentinian.

"He has been organised in bringing in players, but they have competed as well. They work very well tactically."

Theo Hernandez, Atletico Madrid loanee, will likely face his parent club during the clash, and Simeone praised the youngster for his progression.

"Theo has grown accordingly with what he had already shown when he came to train with us," said the 46-year-old. "Power, physical strength, changing pace from midfield looking forward. We are happy about what is happening to him."

There was no word on how Atletico might set up on Saturday, but the Argentinian coach said his side "will always compete with the same intensity, across all competitions."

Arsenal manager Arsene Wenger has been given a four-match touchline ban after admitting a misconduct charge, the English Football Association said on Friday.

Wenger appeared to push the fourth official during Arsenal's Premier League win over Burnley on Sunday.

Wenger was charged by the FA on Monday after he was sent to the stands by the referee for allegedly using abusive or insulting language towards fourth official Anthony Taylor after an injury-time penalty was awarded to Burnley.

"It was further alleged that following his dismissal from the technical area, his behaviour in remaining in the tunnel area and making physical contact with the fourth official amounted to improper conduct," the FA said in a statement on Friday.

"The Arsenal manager, who was also fined 25,000 pounds ($31,342), admitted the charge and requested a personal hearing which took place before an Independent Regulatory Commission today (Friday)."

Wenger reacted angrily after Burnley were awarded a 93rd-minute penalty at the Emirates Stadium, one they scored to level at 1-1.

He was sent to the stands by referee Jon Moss, but stood in the tunnel entrance and refused to move as he tried to watch the remainder of the game.

Taylor appeared to encourage Wenger to move away, but the Frenchman was seen pushing back against him.

Arsenal snatched a winner at the death when they were awarded a penalty of their own, which was converted by Alexis Sanchez.

Arsenal travel to face Southampton in the fourth round of the FA Cup on Saturday, before they host Watford in the Premier League three days later.

The other matches Wenger will miss are league encounters away to Chelsea on Feb. 4 and at home to Hull City a week later.

He will return to the dugout should Arsenal reach the FA Cup fifth round or for their Premier League trip to Liverpool on March 4.

Moving from the Estadio Vicente Calderon to Atletico Madrid s new stadium, the Estadio Wanda Metropolitano, has not disheartened the bulk of the clubs supporters with 83% of current season ticket holders already securing their seat for the upcoming season.

A total of 40,026 have already confirmed their place from a possible 48,441, and the number is due to increase as the club release more to members that haven't held a season card at the Calderon.

As a result, Los Rojiblancos have pocketed over two million euros from those that paid to book their seat for the 2017/18 season.

There are still 5,000 applications pending, and Atletico look set to break a record for season passes sold due to the increased capacity of the new stadium.

Conte: Cahill has moved on from Mason incident

Chelsea defender Gary Cahill will be in the right frame of mind for Saturday's FA Cup clash against Brentford after he was involved in the incident that left Hull City's Ryan Mason with a fractured skull, his manager Antonio Conte said on Friday.

Cahill was distraught after the sickening clash of heads with Mason on Sunday and visited him in hospital after the match, British media reported.

"He was not so good. Now he's in good form. He has overcome the situation," Conte told reporters when asked about Cahill's mental state.

Mason is making good progress in his recovery after undergoing surgery.

"I understand how Gary is feeling - I'm pleased the guy (Mason) is well. I wish him and his family the best. I would hope to see him very soon on the pitch again," Conte said.

Chelsea have reportedly had a bid for Celtic goalkeeper Craig Gordon rejected and Conte insisted his second-choice shot-stopper Asmir Begovic will be going nowhere if he cannot find a replacement during the January transfer window.

"Begovic will be allowed to leave if we can find a suitable replacement, but if not, he will stay at the club. For sure there is this Begovic situation," the manager added.

"Bournemouth asked about him but he's Chelsea's player. I'm happy with him."

Conte hinted he was likely to field a few fringe players when Chelsea host second-tier Brentford at Stamford Bridge in the fourth-round tie.

"We want to avoid a replay if possible, so we must try to win the game... Begovic will start tomorrow," he said.

"Nathan Ake can play as a central defender or wing-back. It's a good opportunity for him. Tomorrow's game is another chance for Michy Batshuayi to show his improvement."

Reserve keeper Sergio Romero will make his sixth appearance of the season and the Cup holders will recall forward Anthony Martial after he missed the last two games.

"This is the second match for us in the FA Cup and I want to do it in a serious way," said Mourinho, whose side reached the League Cup final with a 3-2 aggregate win over Hull City on Thursday. "We have to play with a very good team.

"The only player that is out is De Gea - I'll give him a few days off."

Mourinho challenged Frenchman Martial to keep his place for next week's Premier League game against Hull, having found goals hard to come by this season.

"Anthony will play on Sunday and if he plays magnificently, he will play against Hull in the next match - it's simple," Mourinho said.

The match will mark a return to Old Trafford for United's former reserve team coach Warren Joyce who left in November to take over at Championship strugglers Wigan.

"He knows us well and will come with special motivation to play against his old club," Mourinho said.

"I worked at the club with him for a few months but it was enough to know he's a very nice man, a very passionate football man. He took the risk, accepted the challenge and left a good situation at this club.

"His team will be very aggressive, very well organised defensively and also emotional, like the manager is emotional, so it will be a difficult match."