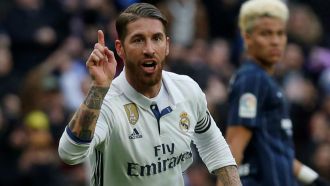 Wednesday, 25 January 2017
When Real Madrid take on Celta Vigo in the return-leg of their Copa Del Rey quarter-final, the onus will be on high-flying defender Sergio Ramos to come up with the goods yet again to overturn the deficit.

The Merengues have work to do if they are to qualify for the semi-finals of the domestic cup competition after losing the first-leg 1-2 at home last Wednesday.

The Real Madrid captain has made last-minute strikes a habit of his in recent years, equalising in stoppage time to take their Champions League final against Atletico Madrid to extra time, eventually winning the match 4-1.

Earlier this season, the 30-year-old equalised again in stoppage time during their European Super Cup match against Sevilla, helping the club to eventually prevail 3-2.

And the centre-backs efforts upfront have only gone from strength to strength this season.

Ramos scored his fifth and sixth goals of the LaLiga season when first-half brace on Saturday condemned Malaga to a 2-1 defeat.

In doing so, the former Sevilla became the side's second-highest goalscorer this season above the likes of Karim Benzema, Alvaro Morata and Gareth Bale.

More poignantly, Ramos has been Madrid's best clinical player since the turn of the new year and has scored three times - more than any of his teammates - despite missing the first two matches of the year.

Things don't look too promising for Real Madrid after their 2-1 loss in the Copa del Rey quarter-final first leg against Celta Vigo, however, Zinedine Zidane's side has progressed in all five of the two-legged cup games that he has contested so far as coach of Los Blancos.

If the Frenchman does so on this occasion, it will have to be without the services of Marcelo and Luka Modric, the latest victims of an injury curse that has already claimed Dani Carvajal, James Rodriguez, Pepe and Gareth Bale

Half of Real's first-choices effectively missing for a must-win game means the mood is pessimistic amongst club support, but Zidane doesn't know what it's like to lose in these do-or-die situations.

He's also won all three finals for which his team has qualified, with numbers that will ensure Celta give Real appropriate respect on the night.

In the two-legged ties played since Zidane took over the role, Los Blancos overcame Roma, Wolfsburg and Manchester City to get to the Champions League final against Atletico, and in the cup already this season Cultural and Sevilla have been the victims of a side who have seven victories in 10 games, as well as two draws and a single defeat (against Wolfsburg).

Indeed, the game against the Germans was the only time that Madrid were losing on aggregate before the second-leg, a scenario similar to their game on Wednesday at the Estadio Balaidos - albeit they are away from home on this occasion.

Over the course of those 10 matches, 27 goals have been scored, exceeding the average of two that Real need to emerge victorious again, and in 14 of the 16 games played away from the Estadio Santiago Bernabeu, the net has been rippled at least twice by Zidane's side.

Man Utd. and Chelsea are ready to break the bank for Bale

Although Gareth Bale has previously expressed his desire to remain at Real Madrid, both Manchester United and Chelsea are thought to be preparing 200 million euro bids to bring the Welshman back to the Premier League.

Aside from that hefty outlay, the former Tottenham wide-man would also command a salary in the region go 400,000 euros per week.

Various outlets in the English media are reporting on a potential deal, which would overtake Paul Pogba's world-record move to United as the most expensive in football history were it to be concluded.

Chinese clubs can't be ruled out either, however the likelihood of Bale opting for anything other than a move back to England if Real were to accept any bid for his services, is low.

Ferguson: No one will beat Rooney's United record

Former Manchester United manager Alex Ferguson believes no one will ever beat Wayne Rooney's record of 250 goals for the club.

Ferguson, who signed Rooney as an 18-year-old in 2004, said surpassing Bobby Charlton's 249-goal mark by scoring against Stoke City last Saturday was "an achievement par excellence".

"In the present-day game, it is difficult to see any club having players who can stay with them for 10 years," he told the BBC on Tuesday.

"Jose (Mourinho) has mentioned Marcus Rashford and there is an opportunity for that young lad, if he stays at United, and develops his potential the way that Wayne has. But it is a very big target to hit."

Ferguson also saluted the way Mourinho has turned round the club's season after an uncertain start.

"I think he has done a great job," said Ferguson of the third manager to be tried by the club since the Scot's retirement in 2013.

"The first team weren't doing great and you have to find solutions to correct that. I think Jose is finding solutions now. There was a period earlier in the season when he wasn't getting the decisions and his emotions boiled over. You see him now -- he is calm and in control.

"You can see he has got to grips with the club. The team is playing really well and he has been very unlucky. He has had six 1-1 draws and in every game he has battered the opposition.

"If they hadn't had all these draws, they would be there challenging Chelsea. That is the unfortunate part but he is going to have to live with that."

United, sixth in the Premier League, have the chance to reach Wembley under Mourinho for the first time on Thursday when they take a 2-0 lead into the League Cup semi-final second leg against Hull City.

The incident happened on Monday, little more than 24 hours after Xhaka was sent off in a Premier League match against Burnley, a dismissal that will probably incur a four-game ban.

Xhaka had travelled to the airport to see off a friend flying to Germany, but reacted badly when his companion was refused entry after arriving late for the flight at Terminal Five, the reports said.

The Independent reported that a witness said the 24-year-old Switzerland international had racially abused a member of staff in German.

"Police were called at 19:29hrs on Monday, 23 January following an allegation that a member of staff had been racially abused at Heathrow Airport, Terminal Five," a Metropolitan Police spokesman said.

"The allegation was made by a third party. Officers attended and spoke with a man in his 20s. He was not arrested. He voluntarily attended a west London police station where he was interviewed under caution."

Xhaka has now been sent off nine times in three seasons. If he is banned for four games he will miss Arsenal's FA Cup fourth-round clash with Southampton and league matches against Watford, Chelsea and Hull City.

Manchester City midfielder Yaya Toure has criticised fellow footballers who have traded Europe for China, saying he would prefer to follow Manchester United forward Zlatan Ibrahimovic's example and stay in a competitive league.

Their rivals Shanghai Shenhua signed Argentine striker Carlos Tevez for a reported 84 million euros, but Toure said money was not everything to him.

"Some people have the mentality that they want to do that (go to China) - to try something different. But for me, my feeling is that I want to play more football.

"Look at my friend Ibrahimovic. He's 35 and he's going to play for maybe three more years? He's got the same mentality as me. He's a big player, a champion who loves football. It's football first. Anything after that is a bonus."

Toure, who is out of contract in June, was frozen out of City's squad earlier this season following a spat between the manager Pep Guardiola and the player's agent, but returned to the team in November after making a public apology.

He has featured regularly ever since, but there is no official word yet on whether he will be offered a new contract at City. His agent revealed last week that he had turned down a 520,000 pounds a week offer to play in China.

"I want to play in Europe, especially in England. I want to continue doing that for a few years yet. I always say that if I went to China I would end up feeling angry there," the 33-year-old added.

West Ham United striker Andy Carroll is poised to enter the best stretch of his career if he can stay fit, according to manager Slaven Bilic.

Carroll's career has been plagued by injury problems and the 28-year-old missed more than four months of the current season, from mid-August to December, with West Ham winning just three of 12 league games in that period.

Since his return to the team on Dec. 3, West Ham have won five of 10 in the league and drawn one, with Carroll's contribution of five goals helping them move away from the relegation zone and up to 10th in the table.

"He is at a great age, he is happy, he's smiling, he's settled down," Bilic told West Ham's website. (www.whufc.com)

"He's happy with us and there's no reason why he shouldn't enter five years of his best football now.

"He is 100 percent fit now. He has been training for a couple of months, and there is no reason to think the best period of his career won't come now."

Carroll, who has been in unstoppable form in recent weeks, scored twice in Saturday's 3-1 league win at Middlesbrough, and Bilic praised the striker's ability to dominate defences with his aerial prowess.

"When I was playing at centre back I always felt it was up to me rather than down to the centre forward when the ball comes in," added the manager, whose own playing career included spells at West Ham and Everton.

"With Andy it's different, whoever plays centre back it's more up to Andy. It's unbelievable.

"Now he looks fit, he's training. Of course we are managing him, but we are not nursing him like maybe before. He is training as much as possible, without going over the line. For me it's the only way to stay fit, by training."
Email : [email protected]
Προηγούμενο : Messi carries his world-beating form into the new year | Επόμενο : Στον παράδεισο οι «Άγιοι»
Προβολές : 390
- 2693 προηγούμενη ημέρα