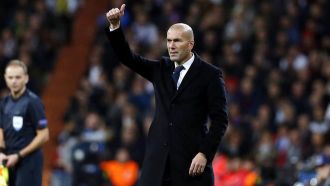 Real Madrid lose their unbeaten record after a staggering 284 days

Monday, 16 January 2017
After a late 2-1 defeat against Jorge Sampaoli's in-form Sevilla, Real Madrid's 40-game unbeaten run in all competitions will remain at just that, with Stevan Jovetic the man to sink Zinedine Zidane's hopes of furthering the run.

The last time that Los Blancos had suffered a defeat was last season, in Germany as they lost against Wolfsburg in the away leg of a knockout round in the Champions League - little did they know, it would then be 284 days until they would taste defeat again.

Sampaoli's side had already made life difficult for Real Madrid in the Copa del Rey earlier in the week, but weren't to be disheartened after going behind due to a goal from Cristiano Ronaldo.

After visiting stadiums such as Camp Nou, the Etihad Stadium, and Signal Iduna Park, Zidane's men have saved various match points, as it were, with goals from Sergio Ramos proving vital in such fixtures.

On this occasion, the Seville-born defender wasn't able to score in the opposition goal, but rather put the ball in the back of his own net without meaning to.

Zidane now suffers his third defeat as Real Madrid boss, the Frenchman previously losing to only Atletico Madrid and Wolfsburg, and now this Sunday against Sevilla.

Zidane: Real Madrid relaxed for five minutes and that was enough

After seeing his charges give up two goals in the last 10 minutes of the game, Real Madrid coach Zinedine Zidane admitted that a temporary loss of focus cost his team three points.

Los Blancos looked set to extend their unbeaten streak to 41 games after Cristiano Ronaldo scored from the penalty spot, but a Sergio Ramos own goal and a stoppage time winner from Stevan Jovetic gave Sevilla a 2-1 win.

The result means Jorge Sampaoli's men consolidate second position in the LaLiga table, while Real remain on top with just a one-point lead, albeit with a game in hand.

"We relaxed for five minutes and that was enough to let the win escape for us," Zidane told reporters after the final whistle.

"It's hard to take considering how the game went, but that's football and we have to accept the result. We'll use this as motivation for our next game."

The Frenchman was unsurprisingly quizzed about his decision to employ a 3-5-2 formation with three central defenders.

"Personally, I thought we played with great personality with three centre-backs, and I was pleased with how hard the other players worked," he said.

"We managed well for 85 minutes, but lost focus for just five."

The defeat means Real's unbeaten streak will not move beyond 40, but the 44-year-old was philosophical on this matter.

"It's logical that one day the unbeaten run would come to an end. I always said that the season will be tough right until the end," he noted.

Also on the agenda was captain Sergio Ramos, who followed up his panenka penalty kick heroics midweek with an own goal to let his former side back into the game.

"I'm proud of our captain. He played a great game, and own goals can happen in football. He showed great personality," the French boss stated.

"Sevilla showed that they are genuine contenders for LaLiga. As for us, we're hurt because a defeat is never pleasant, but we'll analyse our performance and see what needs improving.

"We aren't going to change anything, and we will continue working hard as we have done so far."

Ramos: There is no need to single anybody out

Sergio Ramos was left with the task of walking through the mixed zone after Real Madrid's late 2-1 defeat at Sevilla, after a mistake of his own doing allowed for the hosts to equalise.

After a free-kick delivery was whipped in from the right-hand side by Pablo Sarabia, Raphael Varane and the Real Madrid captain both got in each other's way, with the ball eventually deflecting off Ramos' head and into the back of his own net.

"I haven't seen the passage of play, there isn't any need to single anybody out or apologise for it," the Spain international told reporters.

"When we win, we all win together, and when we lose it is the same - we were not able to kill the game off."

Sevilla had a good record at the Estadio Ramon Sanchez Pizjuan, with Stevan Jovetic's late winner adding insult to injury for the travelling Los Blancos.

"This stadium is always very difficult [to visit]," he noted. "I am proud of the game. In the last few minutes we weren't able to handle ourselves, and Sevilla made it tight. We are leaders, so we have to keep going forwards.

"We didn't get too relaxed, we just did not know how to manage the game, as Luis Aragones used to say. One foul, and then some other things. But chin up.

"It has given us a good result [the 3-5-2], if we had won then the analyses would have been different. It more than worked."

After receiving some abuse from the stands in Real Madrid's last game against Sevilla, Ramos was keen to focus on the football rather than the fans, and dismissed their influence.

"When I went out onto the pitch, I intended to avoid it [the bad reception]," stated Ramos. "The own goal was just one moment in the match. It was one of my best games here with Real Madrid.

"Sevilla have had a great first half of the season, they are a candidate [for the league]. We have to keep going, now we have to already think about Celta Vigo."

Nobody would have thought that Sevilla would be flying so high at the Estadio Ramon Sanchez Pizjuan, not least their spirited Argentinian coach Jorge Sampaoli.

An own goal from Sergio Ramos and a late strike from Stevan Jovetic ensured that Sevilla picked up two good results against Real Madrid in the space of a week, and the signs are there to suggest that their good form can last for a while yet.

"I never thought that it would be this good," Sampaoli told reporters post-match.

"I thought that it would have been something very difficult and that it would bring a lot of difficulties to get the group going as I wanted them to, with a lot of new players and departures.

"There are always going to be conditions which force us to improve, like the fans, transmitting to us their love for attacking football.

"We know that there is a way to prepare ourselves to overcome rivals who are very tough. It all depends on ourselves."

Sampaoli wasn't to be drawn into talking directly about the title, but is optimistic about Sevilla's future this season.

"We have to keep going like this, with the excitement from everyone and knowing that every game is going to be a difficult one for us," he stated.

"We have an obstacle at the weekend and we will make the most of how it stimulates us to keep growing and getting better."

The best scoring duo in Europe

Las Palmas was their latest victim, where the Uruguayan struck twice and the Argentinian with his right footed shot completed his list to score against all 20 current LaLiga teams.

With their 28 goals (14+14) in 32 matches, Messi and Suarez have found the net so many times in their domestic championship that no other partnership can compare.

Not in the Premier League nor in the Bundesliga, can such an explosive and functional duo be found.

They lead LaLiga as well because injury problems have stopped the three members of Real Madrid's attack at different times - with only 24 games between them, Cristiano Ronaldo and Karim Benzema or Ronaldo and Gareth Bale, have only netted 16 in total (11 + 5).

As such, Ronaldo and Co. will have their work cut out for them if they are to catch up with their Blaugrana rivals.

Afirst signing of the January window has arrived at Valencia in the form of Juventus striker Simone Zaza.

Initially joining on loan, the Italian has been confirmed as having a permanent purchase option embedded in his Che contract, having spent the first half of the season with West Ham United.

"I'm very happy, this is the move I wanted," Zaza told the official Valencia media as he signed.

"I like the fans, they were incredible during the game [against Espanyol] and it was a very good win for the team, because it's not an easy time.

"We have good players with personality and I hope to play as soon as possible."

Ahead of a tough trip to Villarreal next weekend, the attacker will be presented to the press on Monday afternoon and is ready to right the wrongs of his stay in East London.

"I've had a very difficult time, personally," he continued. "I want to show to the world and myself that I'm a player who knows how to score."

Tite, coach of the Brazil national team, has revealed that Neymar has asked to be made his country's captain once again.

After leading the Selecao to Olympic Games gold on home soil in the summer of 2016, the Barcelona forward gave up the armband, announcing that he didn't want to wear it any longer.

However, according to the Brazil boss, the striker's feelings on that particular subject have changed since the turn of the year.

"At the time, I asked him to let me know when he felt he had matured and ready to take it again," Tite told Extra.

"He's going to be the captain again.

"His youth doesn't bother me. I smile when people compare him to Cristiano Ronaldo or Lionel Messi as they are players from a different generation who have already reached their peak, while Neymar has not."

The 55-year-old also touched on the future of one of his country's brightest talents, Gabriel Jesus, who is set to join Manchester City and had some words of warning for Pep Guardiola as to how best to use the forward.

"I hope that he will be used in a central position as he is a classic centre forward, a real No. 9," Tite added.

"I hope that he isn't played down the wings.

"Even although he plays in [Sergio] Aguero's position, I believe that he can reach his full potential."
Email : [email protected]
Προηγούμενο : Zidane: Ramos is an example for us all and the most emblematic Spanish player | Επόμενο : Diego Costa at the centre of the January window
Προβολές : 346
- 2710 προηγούμενη ημέρα