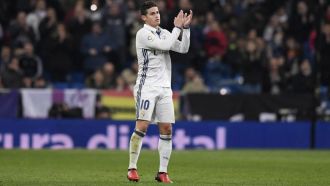 James Rodriguez: I will stay at Real Madrid

Thursday, 05 January 2017
It has been a tumultuous period for James Rodriguez following multiple reports of a transfer away from the Estadio Santiago Bernabeu in January, yet the Colombian has confirmed he will stay in Madrid.

Whether or not this is a long term solution remains unclear - one of the attacking midfielder's main gripes has been a lack of game time - yet he made his mark scoring a brace on Wednesday evening in a rare start against Sevilla.

Following the match the former Monaco star made clear his intention to stay in the Spanish capital for the short-term future at least.

"All of us in this squad want to play and we all go through difficult times but now a new year begins for me and I will stay in Madrid," he explained.

Rodriguez caught the eye against the Andalusians and he relished the opportunity to get back out onto the pitch.

"I just want to play well when I am given the opportunity, I want to be able to do good things like today when I helped the team by making goals," he said.

The 3-0 deficit leaves Sevilla with a lot of work to do in the return leg although the 25-year-old made clear Los Blancos would not be taking anything for granted.

"It is a good result but the tie is not finished and we have to go to Seville and play with a lot of concentration and intensity."

In what was another wondrous display in the white of Real Madrid from Luka Modric, the Croatian was denied arguably his finest ever Los Blancos goal by the goalpost in the 3-0 victory over Sevilla.

Modric ran proceedings from midfield all evening long but was given a chance to cap his night off with a goal in spectacular circumstances.

The former Tottenham Hotspur playmaker attempted a scissor kick with only the post denying him from joining the already illustrious list of acrobatic goals scored over the festive season.

Mauricio Pochettino described Tottenham Hotspur's 2-0 victory over league leaders Chelsea on Wednesday as "massive" as he maintained his record of never having lost a home derby since taking charge of the north London club.

The Argentine, whose side faltered at the death last season when a first league title since 1961 was a possibility, has won eight and drawn four of his 12 derbies at White Hart Lane but the latest was arguably the most impressive.

Chelsea had won 13 matches in a row -- a joint record in a single Premier League season -- and one more would have matched Arsenal's all-time sequence of 14 set over two campaigns.

Antonio Conte's side have been impregnable since the start of October and victory would have put them eight points clear at the top of the Premier League.

Yet two Dele Alli headers either side of halftime, both from Christian Eriksen crosses, earned Tottenham a deserved victory that lifted them to third place, seven points behind Chelsea.

"It is a massive victory, a very important three points to reduce the gap at the top of the table," Pochettino, more concerned with his own team's title chances than ending Chelsea's long winning run, said.

"It was a very tough game, we were playing one of the best teams in Europe, so the value of the victory is massive.

"It makes us very proud and we showed character and were competitive. It is one step forward for the team and it is important to keep going. Football is about belief.

"We have shown we can challenge for the big things. We are in a good position, Chelsea is in a very good position, but we are fighting to get points and to reduce the gap above us."

Tottenham have now won five matches in a row, have the best defensive record in the Premier League and, in Alli, have one of the most in-form midfielders in England.

The 20-year-old has scored two goals in each of Tottenham's last three matches and seven in his last four.

"He is showing fantastic skills in front of the goal. He is a great player and one who has potential to improve. He was fantastic today again," Pochettino said.

While Pochettino played down any talk of revenge after Chelsea came back from 2-0 down to draw 2-2 at Stamford Bridge in May -- a draw that ended Tottenham's hopes of catching eventual champions Leicester City -- Alli said the victory had been particularly satisfying.

"There is a bit of history between the sides now after last season and I think we wanted to stop their run like they did ours," Alli said, referring to the so-called Battle of the Bridge when Tottenham had nine players booked.

"We are happy to stay under the radar and keep picking up the points. We are not going to get carried away, there is always room for improvement."

Chinese football's big spending continues and has put Real Madrid's 'Operation Aubameyang' in danger of falling to pieces. Shanghai SIPG have reportedly submitted an offer to Borussia Dortmund to the tune of €150 million for the striker. It is also reported that he could be paid up to €800,000 per week, which would install him as the world's highest paid player with an annual salary of €41 million. That is more than Carlos Tevez, who recently made the move to Shanghai Shenhua and will be paid €38 million.

Aubameyang is one of Real Madrid's biggest targets for next season, having solidified himself in their plans after the last game of the Champions League group stage against, in which he was very effective. He scored a goal and assisted in the other, which allowed the German side to a share of the spoils and saw them overtake Real Madrid at the summit of their group.

An embarrassment of riches

Shanghai SIPG have already signed Oscar from Chelsea, having paid €61 million for the Brazilian this winter. His salary is said to be around €25 million. The Shanghai side also have Argentinian Darío Conca and Brazilian Hulk, who they paid €55 million for, in their ranks. Add Aubameyang to the mix and you have the most potent attack in a league that starts in March.

The Gabon striker trained in AC Milan's cantera and signed with Dortmund in 2013 from Saint Etienne. The German club paid a paltry €13 million for his services and he has turned into a player that would fetch no less than €80 million in the current market. This season he has scored 20 goals in 22 games.

This week, the club already exercised their spending power by beating out the likes of Juventus to sign Belgium international Axel Witsel, who will earn 18 million euros in Asia.

According to Sky Sport Italia, Cannavaro has now turned his gaze towards his homeland as he eyes further reinforcements, identifying Fiorentina forward Kalinic as one of his prime targets, with Tianjin willing to meet his 50 million euros buyout clause.

In addition, Tuttosport also claim that Cannavaro is interested in Bacca of AC Milan, although they face competition from Guangzhou Evergrande and Shanghai Shenhua.

Chinese football has pulled off some notable coups in recent weeks, swooping to make Carlos Tevez the highest paid player in the world as well as tempting playmaker Oscar from Chelsea, who moved to Shanghai SIPG for a fee of 71 million euros.

Llorente: "Conte is the best coach I've worked under"

The Spanish striker spoke about Chelsea's reported interest in him and newly-appointed coach Paul Clement.

After a turbulent start to the season, Fernando Llorente is emerging as one of the leading lights at Swansea. The Spanish striker has overcome fitness problems and the team's precarious situation and enters the New Year with six goals from 17 league games. Today, he spoke to Spanish news agency EFE about Chelsea's reported interest in signing him and newly-appointed coach Paul Clement.


How much do you know about new manager Paul Clement? "I know that he's been at some big clubs with [Carlo] Ancelotti. He's learned a lot from Carlo and I think he can really help us a lot. It's true that he hasn't had that much coaching experience on his own yet, but I'm sure he can give us a big hand. The first impressions have been very positive; he has got over some important ideas to the squad and it helped us having him there for the [Crystal Palace] game. We hope he can lift us out of our situation".


Before Clement was appointed, several names cropped up - such as Ryan Giggs and Chris Coleman. How has it been for the players to go through such uncertainty since Bob Bradley left? "We, the players have taken it all calmly. We were very keen to see the new manager come in as soon as possible - as he is an important figure within the team. We needed someone in control, a boss to start working with us and helping us".

In recent weeks there have been rumours placing you in Chelsea's orbit... "To be honest, I know nothing about that. Right now I am focused exclusively on Swansea, and in resolving this complicated situation we are in".

You have worked under Chelsea manager Antonio Conte at Juventus... "My experiences working with Conte at Juve was fantastic. He's the best coach I've had in my career and I wish him the very best. I knew that he'd do well in the Premier League because he's a winner and he works very hard. I really enjoyed the year I spent with him at Juve and I wish him well at Chelsea".
Email : [email protected]
Προηγούμενο : Profiling the six candidates who could coach Barcelona if Luis Enrique leaves | Επόμενο : Pique: Barcelona already know how this works
Προβολές : 450
- 2778 προηγούμενη ημέρα