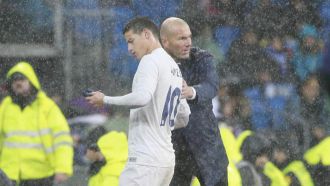 The Colombian was one of the most expected arrivals in Valdebebas, after sowing doubts about his future in Madrid just after the Club World Cup final.

"I can't say I will continue, I have offers and seven days to think," he said after claiming the title in Japan.

He landed back in the Spanish capital on Tuesday morning, while the staff headed by Zizou returned to training in the afternoon.

It was at that point that the midfielder and coach again faced each other.

Although it is not even being contemplated that James will be allowed to leave until at least June, if the situation becomes worse than it already is, the end may come sooner rather than later, especially as the winter transfer window remains open until January 31.

Another of the players who has been in the news over the Christmas break was Pepe.

The Portuguese defender has some big offers from China to consider and with his Real contract ending in June, he is free to start negotiations with other teams from January 1.

The injury that prevented Pepe from having minutes in the Club World Cup also kept him away from the bulk of the squad on Tuesday.

Keylor Navas, Sergio Ramos, Lucas Vazquez and Mateo Kovacic trained inside while Gareth Bale continued with his own rehabilitation.

Despite such turmoil, Real returned from the holidays with their sights firmly set on the first leg of their Copa Del Rey tie against Sevilla.

That will take place next Wednesday, coinciding with the first anniversary of Zidane as coach of the team.

One of LaLiga's hottest properties is once again a potential candidate for a major coaching role, as Ernesto Valverde draws the gaze of Barcelona.

With Luis Enrique's future at the Camp Nou set to go undecided until the end of the season, a shortlist of replacements will be on the club hierarchy's minds and the Athletic Club coach has been continually impressive in the Basque Country since joining in 2013.

In fact, Real Madrid reportedly sought the ex-attacker having disposed on Rafa Benitez at the start of the calendar year, opting for Zinedine Zidane after Valverde chose to stay in Bilbao and sign a new deal.

However, that contract runs out at the end of the 2016/17 season and a move to Catalunya may be too tempting to turn down for a man who played for Barcelona between 1988 and 1990.

With great knowledge of Spanish football and an ability to carry out the Azulgrana's style of football, Valverde is well liked in the north-east and may find himself subject to an offer if Luis Enrique makes his way through the exit door.

Luis Enrique asks for time to think about his future

As we come to the end of 2016, neither Barcelona nor their supporters know if the coach of the first-team, Luis Enrique, will continue in the position beyond June 30, the Asturian asking for more time to consider his options.

Just as he did at Barcelona B, Roma and Celta Vigo, Lucho will be in full control over his future.

He has accumulated considerable credit for all he has achieved in two and a half seasons on the bench at the Camp Nou, for everything he can still achieve in this current season and, above all, for having made the team able to compete again.

After the departure of Pep Guardiola, the loss of Tito Vilanova and the terrible year under Gerardo 'Tata' Martino, the successes give him time to decide whether he wants to start a fourth season at the club or if he prefers to take a sabbatical, as he acknowledged a few days ago in an interview on the club channel.

"If my future is not here , it will not be anywhere," he said.

However, the club are not willing to wait until the spring for his decision.

The directors and board executives in charge of sports planning want news before the decisive part of the season begins.

A precedent for a goodbye

In 2012, Guardiola waited for the outcome of the titles in May to say publicly that he would not continue, which he had already decided and shared internally before the holidays.

Until then, he batted away the questions about his future that he was asked at press conferences.

Luis Enrique also has his own precedent of goodbye at Barcelona - in 2011 when in charge of the B team. After his third season, he announced that he had left.

"We have helped to train footballers for the first team but now I am looking for new challenges and I don't know where the future will take me. But I'm not worried about anything," he explained, arriving at Roma shortly afterwards.

Lucho's future will be decided by what he wants, what he feels, but is also associated, obviously, to people who work with him on a day-to-day basis and who depend on his decisions.

His closest associates will be the first to know but his players will also be keen to find out.

After a weeklong break, Diego Simeone's side are already training once again, as Filipe Luis marked his return after a muscular injury.

Tiago Mendes however was still out with a knee injury, picked up roughly two weeks ago.

Augusto Fernandez and Jan Oblak are sidelined for the longterm so the left-back's return is especially welcome as the team enter a new year.

Before a key Copa del Rey clash against Las Palmas, El Cholo is preparing for the friendly in Jeddah, Saudi Arabia to be held on December 30.

Not content with signing some of the world's best players to join their growing league, Chinese football chiefs are also interested in bringing top officials to the Far East, with Mark Clattenburg of England particularly prominent on their radar.

During the recent Globe Soccer Awards in Dubai, representatives of the Chinese Super League were quoted as saying they would try to attract some of the evening's winners to the competition.

This desire extends not just to players, but also to other figures in the game, such as Premier League referee Clattenburg, who was crowned the World's Best Referee at the ceremony.

Key to their vision is the appointment of a statement signing such as the Englishman, as they aim to clean up the league's image and eradicate fears over corruption.

For that very reason, the 41-year-old from Durham, who officiated the FA Cup, Champions League and European Championship finals in 2016, would be viewed as a particularly good addition.

A number of Premier League-based stars, such as Wayne Rooney, John Terry and Alexis Sanchez are also believed to be potential targets for Chinese bosses following the recent arrival of Oscar and the impending acquisition of Carlos Tevez.

Maradona: I wish Real Madrid-Napoli was being played today

Napoli's Champions League clash with Real Madrid can't come soon enough for Partenopei legend Diego Maradona, with the Argentine hoping his old club can take on Cristiano Ronaldo without the winger at this best.

Although the Portugal captain finished 2016 with a hat-trick in the Club World Cup final, many in the footballing world see the winger as off his best form.

"I want [Madrid-Napoli] to be played today because Ronaldo is not at his best," Maradona said to reporters.

"However, by February I think he'll be in top condition, as will his teammates."

While Napoli are a guaranteed threat to Los Blancos in the last-16 tie, the Serie A side may rue the sale of Gonzalo Higuain to Juventus, something that Maradona wouldn't have done if he were club president Aurelio de Laurentiis.

"I said last season that if Higuain scores 36 goals, it's a miracle and de Laurentiis knew how to use that to sell him, because he'd sell his own wife," joked the 56-year-old.

"He saw Juve needed a striker and sold them one. I think these decisions should be made with the heart; I stayed with Napoli and Higuain joined Juventus.