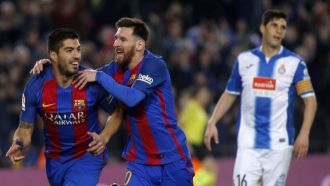 Suarez: Messi is a Playstation player

Although the Uruguayan bagged a brace, it was the Argentinian that stole the show with a virtuoso performance.

"The way Leo plays is like using a Playstation," Suarez noted after the game.

"You can see is happy and hopefully for the sake of everyone he stays in the club, but he is the one who has to make the decision."

His latter comment came in reference to the fact that Messi is yet to sign a contract renewal but after such a display its surely just a matter of time before Barcelona accede to his wishes.

Manchester City happy to keep the faith with Guardiola

A minute later they may also have been questioning the manager's surprising decision to play England winger Raheem Sterling through the middle when he headed a cross wide of the post instead of into the net from close range.

Anything less than a win in Sunday's Premier League clash, which City achieved 2-1 after a thrilling second-half comeback, would have risked continuing the discussion about the Spaniard's tactics and methodology well beyond the final whistle.

Guardiola has been under real scrutiny since last week's 4-2 trouncing at struggling champions Leicester City.

Home wins over Watford in midweek and now Arsenal were essential for everyone to keep the faith, and City will believe the seven points that separate them from league leaders Chelsea can be clawed back over the next few months.

"It's important now we are second - we make a good game from the beginning to the end - we deserved our win," said Guardiola.

"When another team scores first it is not easy, what I ask to the players is simple: to keep the spirit to play for our people, our fans. They stayed till the end of the game, normally they leave 10 or 15 minutes before the end.

"Of course, (the result) will give us belief. There are brilliant teams (in the Premier League), it is going to be tough to qualify for the Champions League next season even."

Guardiola's case has not been helped by the suspensions of Sergio Aguero and Fernandinho, who were sent off for their moments of madness against Chelsea at the start of the month.

Serious injuries to midfielder Ilkay Gundogan and defender Pablo Zabaleta, who was taken off at halftime on Sunday with suspected ligament damage to his left knee, are also a setback.

In their absence, attacking midfielder Kevin De Bruyne delivered an impressive second-half performance capped by a superb cross-field ball to set up Sterling for the winner.

"It was about tactics and desire," said Toure, emphasising the conjunction as if to make the point that Guardiola's teams are not all about pretty patterns. They battle too.

Wenger anger as City stun Arsenal on day of comebacks

Manchester City produced a thrilling second-half comeback to beat Arsenal 2-1 on Sunday and move above Arsene Wenger's side into second place in the Premier League, seven points behind leaders Chelsea.

Chelsea are top with 43 points, followed by City on 36 and then Liverpool, who visit Everton in their game in hand on Monday, and Arsenal with 34, Spurs on 33 and Manchester United with 30 after their 2-0 win at West Bromwich Albion on Saturday.

Arsenal have suddenly had more than enough disappointment, after also blowing a lead to lose 2-1 at Everton last Tuesday, and Wenger said they had suffered a "horrible week".

It appeared the opposite at halftime with Arsenal appearing bound for victory on the back of Theo Walcott's fifth-minute opener as the forward rounded off a stunning three-man move.

The Gunners could have increased their lead before being stunned by a City side, so hesitant in the first half, who took control after the interval with goals from Leroy Sane, his first since joining in the close season, and Raheem Sterling.

Wenger thought both goals were offside, though the decisions were marginal and Arsenal's manager acknowledged his side came off second best after the break in the physical contest.

"Today we conceded two offside goals," said Wenger "It's difficult to accept. I believe there's a lot going on (regarding 'bad' refereeing decisions). It's hard going into a game like that and you get decisions go against you.

"We were a bit jaded physically. We played four games from five away from home," he added.

Walcott, by contrast, said Arsenal had been beaten "by a better side".

It was City's first win from a losing halftime position at the Etihad since 2012, although manager Pep Guardiola refused to take the credit, saying "I didn't say anything to them at halftime".

Florentino and Zidane: History and a hug in Yokohama

After history was made in Japan, Real Madrid's president Florentino Perez and coach Zinedine Zidane celebrated with a hug.

Not even the untimely words of James Rodriguez could takeaway this moment, at the end of a spectacular 2016 for Los Blancos.

It shouldn't be forgotten that it was the president who took the initial risk of having an untried Zizou on the bench.

Before Sergio Ramos lifted the Club World Cup, the embrace between the pair said it all.

It was an image of happiness, of a job well done, of the complicity of something more than a boss and an employee.

That's because Florentino and Zidane are friends. On the stage of Yokohama Stadium, the president was happy for the 17th title of his tenure, but especially for the Frenchman's triumph.

"The year has been the best," the coach said after the match against Kashima Antlers.

Zidane could not stop laughing after another success, but he suffered during the game, in which Real's opponents played a surprise part.

"You do not see how tired I am," he continued.

"I have no voice and I suffered a lot but thanks to the work and the large group of players that I have, everything is moving forward.

Zidane: 2016 has been phenomenal

With Club World Cup and Champions League titles in the bag less than a year into the Real Madrid coaching job, Zinedine Zidane acknowledged that it's been a quite extraordinary 12 months for coach and club alike.

Neither final was anything close to straightforward, with Los Blancos needing extra time to see off Kashima Antlers on Sunday after they previously needed a penalty shoot-out to defeat Atletico Madrid in the Champions League final.

A Cristiano Ronaldo hat-trick secured a 4-2 victory for Madrid on this occasion, with the players later hoisting their beloved manager in the air at Nissan Stadium in Yokohama.

"2016 has been phenomenal," Zidane told reporters in his post-match press conference.

"I'm happy for a job well done. It hasn't been easy, we had to suffer to accomplish what we have this year and we saw that today.

"These players always fight until the end. We have to dream always."

The 44-year-old addressed his decision to play three at the back upon seeing his side go 1-2 down early in the second half.

"We were down and I had to put Marcelo and Dani [Carvajal] higher. I do not rule out repeating it in the future."

While Los Blancos will doubtlessly be thrilled about their latest silverware, reporters were quick to point out the team's downward slide in the wake of their 2014 Club World Cup triumph.

"We know what happened under [Carlo] Ancelotti, it can happen anytime but if we work hard, we won't change," the Frenchman stated.

"The good thing is that we have a bit of rest before we return on the 27th."

"There are players in Kashima that can play in Spain," he said.

"If you have a dream and you're willing to work hard, you can believe that one day you can play for a great club."

Finally, the French boss admitted that the adrenaline of the Club World Cup conquest was masking his fatigue.