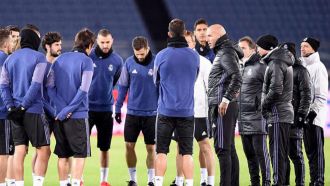 Thursday, 15 December 2016
Real Madrid will begin their assault on the final piece of silverware of 2016 with Mexican outfit Club America set to be a major obstacle when the two sides meet on Thursday.

Since taking over as coach in January following the sacking of Rafa Benitez, Zinedine Zidane has only suffered two defeats, including a 2-0 loss to Wolfsburg in April.

Since then, Los Blancos have embarked on a 35-match unbeaten streak and have added an 11th UEFA Champions League title and a UEFA Super Cup to their trophy cabinet.

Victory at Yokohama Stadium at the semi-final stage as well as the final on Sunday would see the Merengues cap off an almost perfect 12 months and cement themselves as the best club in the world in 2016.

Real Madrid, despite some evident weaknesses such as their inability to be more decisive in crunch matches, have shown in the past month against Atletico Madrid, Barcelona, Sporting CP, and Borussia Dortmund that they have the ability to snuff out results even when far from their best.

As for Cristiano Ronaldo, the attacker who has now claimed his fourth Ballon d'Or title, will undoubtedly be spurred by the opportunity to win his fourth piece of silverware of the year after winning the Champions League, UEFA Super Cup, and the European Championship.

Standing in their way first up, though, are the Mexican giants Club America, who have made a name for themselves for their exciting brand of attacking football under coach Ricardo La Volpe.

Nevertheless, with the side heading into the competition with such high confidence, Real Madrid could prove to be a class above the rest as they seek to put the cherry on top of a great year.

There will be not let up in Real Madrid's approach to the Club World Cup as Cristiano Ronaldo believes his side will end the calendar year just as they've performed throughout it.

Club America will challenge the Spanish giants in Yokohama on Thursday for a place in the final, where local heroes Kashima Antlers await.

"[The Club World Cup] means a lot and we want to end the year in the best way," Ronaldo told the official Blancos media.

"We have not come to Japan on vacation.

"We are here to win the Club World Cup and share it with all the Madridistas."

Should Madrid lift the cup, it'll be their fifth in the competition having won three Intercontinental Cups and one edition of the tournament's setup since 2000; taking them away from AC Milan and Barcelona, who have won four each.

Bartomeu: Cristiano Ronaldo is great but Messi is No. 1

Cristiano Ronaldo may have won the 2016 Ballon d'Or but Barcelona president Josep Maria Bartomeu is backing his man Lionel Messi as the best in the world.

While the Argentine holds the record for the trophy, at five to Ronaldo's four, he was relegated to second place on the podium despite being the world's top scorer in the past 12 months.

"The world No. 1 is Messi. He has been for a while and will remain so, but Ronaldo is a great player," noted Bartomeu to beIN.

However, the future of the Blaugrana talisman is far from secure, although Bartomeu openly discussed his desire to talk to Messi as well as coach Luis Enrique and striker Luis Suarez over a deals.

"Messi is the best in the world and of all time, at 29 he's still at a high level and is growing everyday," he added. "He has a contract and there is time to talk about a new one. We want him to finish his career at Barcelona."

"Suarez will sign with us soon, and soon we will announce it.

"He's brought a change in mentality, not only goals, and is a very ambitious player who deserves to continue here and wants to do so.

"Our desire is to continue after the summer [with Luis Enrique] but we won't sit down to talk to him until the end of the season."

With a fresh court case regarding Neymar's transfer looming, the club president ended by noting that he wasn't expecting the saga to take place in Spain.

"We are very calm," said Bartomeu. "It surprised us a little, because DIS and Santos should solve their problem in Brazil, not here."

Jese back with a bang for PSG

Unai Emery made Jese Rodriguez wait three months for his second Paris Saint-Germain start and the winger made up for lost time with a goal in Les Parisiens win over Lille.

Adding the third after Lucas Moura's double past Les Dogues, the late sealer marked a successful return to the starting XI having caused controversy with an angry reaction to being taken off after 58 minutes of his only other start, a 1-1 draw with Saint-Etienne in September.

Since then, Jese has managed 11 appearances but all came via the bench until tonight, notching just once before this strike in the Coupe de la Ligue.

Italian Gianfranco Zola has been tasked with steering Birmingham City back into the Premier League after signing a two-and-a-half year contract to manage the English championship club.

Birmingham issued a statement on Wednesday saying the former Italy and Chelsea forward had been appointed, hours after the second-tier club announced that former boss Gary Rowett had been sacked.

Zola, 50, has twice managed in England, at West Ham United where he began his coaching career, and at Watford where he resigned in 2013.

"His pedigree, philosophy and ambition fits with what we would like to achieve as we move in a new direction," club director Panos Pavlakis said.

"Gianfranco has a wealth of top-level experience as both manager and player and we are extremely excited about his appointment."

Birmingham have not played in the Premier League for the last five seasons, having been relegated in 2011, the same year they won the League Cup.

Rowett's sacking came as a surprise with the club seventh in the Championship, only outside the playoff places on goal difference following a 2-1 home win over Ipswich Town on Tuesday.

The club said the decision to dismiss Rowett had been tough to make, but the owners remain "determined to lead the club to a bright and exciting future".

Atletico Madrid may soon find themselves holding off the advances of a rival club eyeing yet another of their top players, with Manchester City this time in pursuit of Koke.

Their interest comes in spite of the midfielder's massive release clause, instilled when Atleti signed their man up to a new five-year contract in 2014 off the back of Manchester United and Barcelona's enquiries, which matches Antoine Griezmann's and is worth 150 million euros.

However, Pep Guardiola's side are in no mood to pay such a big, world record fee for Koke, and face a very complicated negotiation task to bring in the Catalan's desired player for a lesser amount.

The ex-Bayern Munich boss admires his countryman for his consistency and technical ability as well as the versatility that allows the 24-year-old to play on both flanks and down the middle.

Certainly, City have not met expectations under Guardiola, as witnessed by his somewhat desperate glance towards Yaya Toure having seemingly dispensed of the veteran, and a tussle with a very reluctant Atletico to do a deal for Koke could ensue in January or the summer.