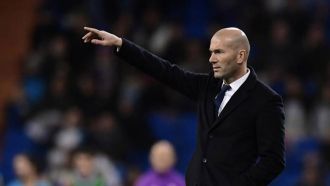 Zidane: I'm happy for Enzo as a father and as a coach

Thursday, 01 December 2016
It was a great moment for the Zidane family when young Enzo Zidane scored his first official goal for Real Madrid against Cultural Leonesa with the father looking on from the sidelines, but the elder Zidane refused to be drawn into an overly emotional show of pride over his son's performance.

Young Enzo scored Madrid's fourth goal in their 6-1 drubbing of Cultural Leonesa, with a Mariano Diaz hat-trick, James Rodriguez header and a late own goal sealing the result.

In what turned out to be an exhibition of Madrid's next-generation talents, Zidane was able to sit back on the sidelines and watch his team walk into the Copa del Rey Round of 16.

"I'm proud of Enzo as a father and as a coach, but also for the entire team and how they played tonight," Zidane said in his post-match press conference.

"We achieved what we wanted and played very well, while giving playing time to the youngsters as well as some debuts."

The Frenchman was also quizzed on what the future might hold for Mariano Diaz and Martin Odegaard, who both entertained the Bernabeu with their displays.

"The idea was to give him minutes. I told him to stay with us during pre-season, and we'll now see what happens in the winter market.

"I don't know what will happen with Odegaard, we'll see later," he continued.

"At 18 years of age, he has great character and personality - he's done very well."

Also on the agenda was the return of Casemiro, whose 90 minutes of action put him in contention for action at the Camp Nou on Saturday.

"It was important for Casemiro to play a full game, and he is physically ready now," the French boss said.

"He was very strong but he played after two months, so we'll see."

With the easier midweek fixture out of the way, the 44-year-old turned his signs towards the upcoming Clasico, a victory in which would leave Madrid heavy favourites to take the LaLiga crown.

"We will face a very difficult rival in El Clasico," Zidane said. "Real must prepare well and be ready to suffer, since it's a decisive game."

Enzo Zidane: To debut and score for Real Madrid is a dream come true

Zinedine Zidane's son Enzo has expressed his delight at Real Madrid's 6-1 thrashing of Cultural Leonesa in the Copa Del Rey after scoring a goal 18 minutes into his debut on Wednesday evening.

With Los Blancos leading 3-1 at the break, the coach opted to bring on the 21-year-old at halftime with Martin Odegaard, Alvaro Tejero and Ruben Yanez also receiving their first-team debuts.

Enzo Zidane claims that the opportunity was a dream come true and believes the welcoming nature of teammates helped with a smooth transition.

"To debut with Real Madrid and to score a goal is always a dream, and I am very happy that it took place at the Bernabeu and ended with a victory," he told reporters.

"This is the beginning and we have to continue working to have more opportunities and help the team.

"The squad is spectacular, the best in the world. There is also a spectacular atmosphere, they always welcome you, give you advice and help in every moment, which is very important for a player like me."

Fellow debutants Yanez and Tejero also expressed their joy of making their debut, with the goalkeeper praising the fans for their support whilst the left-back hopes he can continue to impress the boss.

"I had the usual nerves in the beginning, but playing with these players helps a lot. I was very comfortable on both sides and I will be available wherever I'm played by the coach.

The match also marked the return of defensive midfielder Casemiro who, up until now, has been sidelined for two months with a fibula injury.

The Brazilian international also paid tribute to the victims of the Colombia air disaster and believes the tragedy is a dark moment for the footballing world.

"I'm happy to do what I love the most and am happy about how we played. It's been difficult to be more than two months injured without playing, but now I'm happy to be back.

"I hope to play more in order to continually be at the coach 's disposal.

"It is almost impossible to forget this tragedy. I knew the players, the coach, the journalists and I wish a lot of strength for their relatives and friends, we are very much looking out for them to help them in any way."

As Brazilian soccer club Chapecoense look to rebuild from the devastating effects of the air crash that decimated their squad, they can draw hope from the tale of how Manchester United forged an alliance with Real Madrid to recover from a similar disaster.

The fatal crash on Monday in Colombia that killed all but three of Chapecoense's team as they flew to the final of the Sudamericana Cup evoked memories of the 1958 Munich air disaster in which eight Manchester United players died.

The Munich crash extinguished a generation of young talent at United and ended dreams of a third straight English title, but the club managed to return to the peak of European football, thanks in part to a lifeline from Real Madrid.

Madrid, then European champions, offered their facilities to players and staff recuperating from the accident and raised money, both by selling a special pennant and playing a series of friendlies in England and Spain.

They also offered United their two leading players, Argentine forward Alfredo di Stefano and Hungarian striker Ferenc Puskas, on loan for the last three months of the season - an offer echoed this week by Brazilian first division teams, who volunteered to lend players to Chapecoense.

Although Di Stefano and Puskas agreed to swap Madrid for Manchester, the offer was blocked by the English Football Association.

"The help from Real Madrid was a massive boost. United were finished: they were ready to shut their doors at one stage," Ludden said. "Such generosity of spirit kept United going."

Chapecoense have also received a huge outpouring of sympathy following the crash as they flew to Medellin to face local side Atletico Nacional in the Sudamericana Cup final.

Teams from around the world - including Manchester United and Real Madrid - sent condolences and turned their stadiums, websites and badges green in tribute to the small side from southern Brazil.

Torino, the Italian club who lost all their players in an air crash in 1949, expressed interest in a money-raising friendly, the Corriere dello Sport reported on Wednesday.

Assistance will be vital for Chapecoense, a small club with nothing like the resources of Manchester United or Real Madrid.

They reached the first division for the first time in decades in 2014 and just managing to stay there was a considerable feat.

Beating teams such as Argentina's Independiente and San Lorenzo on the way to the Copa Sudamericana Final were major upsets.

Chapecoense's rivals in Brazil have offered players on loan and asked the Brazilian Football Confederation (CBF) to exempt them from relegation for the next three years.

But the CBF has not yet responded to the idea and there are doubts about the practicalities of such deals.

Ludden said rival clubs in England offered players to Manchester after the Munich disaster but they were reserves and not what the club needed.

Exempting Chapecoense from relegation could also open the way to potential legal challenges, a regular occurrence in Brazilian football.

Ludden said, however, that the outpouring of grief and solidarity with Chapecoense - including Atletico proposing that the Sudamericana title be awarded to the stricken Brazilian club - evoked the mood after Munich and boded well for the club's future.

"It's so sad but there are a lot of comparisons, with Atletico offering them the cup and being so supportive," Ludden said.

When Manchester United won the European Cup for the first time in 1968, the players were still in the dressing-room when a telegram came through from Spain.

"Congratulations from your friends in Madrid," it said.

In a 2-0 win against Angers on Wednesday night, Edinson Cavani celebrated Paris Saint-Germain's second goal by lifting his shirt and sending a message to those at Chapecoense in the aftermath of the tragedy.

Nonetheless, the referee didn't make an exception to the rules surrounding goal celebrations and handed the player a yellow despite his gesture in solidarity.

Cavani's shirt had the Brazilian club's logo alongside the word strength.

Anthony Martial and Zlatan Ibrahimovic scored twice each to help Manchester United ease into the League Cup semi-finals with a 4-1 home victory over West Ham United on Wednesday as Arsenal suffered a 2-0 home defeat by Southampton.

Martial netted twice in the second half to take the tie at Old Trafford away from West Ham, who had levelled through Ashley Fletcher following Ibrahimovic's opener after two minutes. The Swede added the fourth deep into stoppage-time.

Southampton clinched their first appearance in the last four of the competition since 1987 with powerful first-half efforts from Jordy Clasie and Ryan Bertrand against a weakened Arsenal, who made 10 changes to their side.

United were then drawn to face Hull City in the semi-finals and Southampton will play Liverpool.

United and West Ham met at the same venue in the Premier League on Sunday when United boss Jose Mourinho let his frustrations boil over and earned a second touchline ban of the season for booting a water bottle.

The Portuguese was banned from the dugout on Wednesday, but would have been delighted with the way United carved open their opponents after just two minutes with a fluent break.

West Ham opened the scoring on Sunday equally early, but they were caught cold as Wayne Rooney, one goal short of Bobby Charlton's all-time club scoring record, fed Henrikh Mkhitaryan, whose backheel picked out Ibrahimovic to dink the ball into the net.

The Swede should have doubled the lead when he waltzed through the heart of the West Ham defence before twice being denied by keeper Adrian.

That could have proved a costly miss because for all United's first-half dominance, they were pegged back 10 minutes before the break by one of their former players.

Having come through the youth ranks at United, Fletcher was allowed to join West Ham in the close season and punished his former employers by scoring from close range after David de Gea had spilled a shot from Dimitri Payet.

Payet, however, was the villain two minutes after halftime as his poor clearance was pounced on and fed to Mkhitaryan, who claimed his second assist by laying the ball off for Martial to blast past Adrian.

"Goals plus performance means the real happiness," Mourinho, who would not divulge where he watched the match, told Sky Sports.

"The performance is something we are used to, we are playing very well at home. Today was more of the same."

The League Cup has not been kind to Arsenal in recent years with the club having now progressed from just one of their previous six quarter-finals, which was perhaps the reason why manager Arsene Wenger chose to make wholesale changes to his side to face Southampton.

The Saints began the brighter and were ahead after just 12 minutes when Dutchman Clasie fired powerfully into the net for his first goal for the club.

The lead was doubled eight minutes before the break when Carl Jenkinson was outmuscled deep in his own half, allowing Sofiane Boufal to break and tee up Bertrand to drill a low finish into the bottom corner.
Email : [email protected]net
Προηγούμενο : Series of successive errors the cause for Chapecoense tragedy | Επόμενο : Understanding the secrets of Messi and Ronaldo
Προβολές : 304
- 2370 προηγούμενη ημέρα