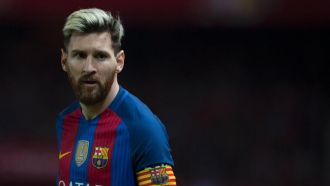 Messi offered 100m euros by mystery club not to renew

Tuesday, 22 November 2016
Although his future as a Barcelona player remains unclear, with reports suggesting that an unnamed club are ready to offer Lionel Messi a 100 million euro fee not to sign a new deal with the Blaugrana, the player is still mulling over his new contract.

His current deal ends in 2018 but as of this moment the Argentinian is yet to sign an extension.

El Mundo claim that an unspecified team is prepared to take advantage of the impasse between player and club should Messi decide to leave the Camp Nou as a free agent upon expiration of his deal.

Although the paper gave no hint as to the identity of the side in question, Pep Guardiola's Manchester City appear the most likely perpetrators given their long-standing interest in the player.

On Sunday, the British press suggested that the Citizens are readying a lucrative financial package in a bid to lure the Argentine to England.

However, Barcelona have insisted throughout that they expect Messi to sign a new deal with the club, further throwing his future into the air.

Griezmann to Cristiano Ronaldo: I hate you

Winning both the Champions League and European Championship has made 2016 one of Cristiano Ronaldo's most successful years in football, and the winger has spoken about the final of the latter, discussing a joke he shared with Antoine Griezmann some time after the game.

A chance encounter with the Frenchman showed how their rivalry is a pleasant one off the pitch.

"He's my neighbour in Madrid, and last season he played very very well and lost both times, but he's a nice guy," Ronaldo told France Football.

"Shortly after the game, I saw him in a restaurant in Miami on holiday, having dinner with his girlfriend. He came over and said hello to me, with a knowing smile he said: 'Cristiano, I hate you'."

Just 25 minutes into the contest, Ronaldo was forced to be replaced after suffering a knee injury during the match, but he feels Les Bleus were never in control of the game.

"They were smiling a lot before the game," said Ronaldo. "It seemed that all the players thought that this was a game that they could easily win."

Failing to have an impact on the game from the bench would have been tough for someone with Ronaldo's ability, and the striker spoke of what it was like to be subbed off early.

"It was the greatest punishment of my career," he said. "It just was not the end that I had dreamed of. Unfortunately I could not bend my leg, and I had to come off."

Despite the disappointment, Ronaldo is clear favourite to win this year's Ballon d'Or competition, a feat that would put him level with Lionel Messi as a four-time winner.

Zidane: All my players are good but BBC are better

Fresh from a new-look Real Madrid smashing their city rivals Atletico Madrid on the weekend, Zinedine Zidane has reinforced his belief that Cristiano Ronaldo, Gareth Bale, and Karim Benzema are his best attackers.

Isco, Lucas Vazquez, and Alvaro Morata have all impressed at varying stages this season although their coach admitted he doesn't seem them as on the same level as their teammates.

"It's not that BBC are non-negotiable, it's that they are the best," Zidane told the assembled press. "All my players are the best, but BBC have a little more.

"The system will not change, we know the difficulty of each match and beating Atletico doesn't guarantee anything and tomorrow will be a very difficult game.

"When I put the team together I tell myself that we'll try and win the game, nothing more. We always study the opponent and they'll study us.

"I think we have the best players. Placing them on the pitch in one way or another doesn't change much."

Whether or not Benzema will be fit to start, having been placed on the bench along with Sergio Ramos on Saturday night, remains to be seen.

"We'll see tomorrow," noted Zidane. "All those here are ready, the injured are back in Madrid."

Beating Sporting CP in Lisbon will be crucial in keeping up the fight to win their Champions League group, although Real's boss is focussed on his own team rather than how Borussia Dortmund get on against Legia Warsaw.

"I don't look at these permutations," Zidane insisted. "What matters is that we go to win games, we'll do everything to win and afterwards we'll look at the table."

A statue of Zlatan Ibrahimovic will be erected outside the Friends Arena in Stockholm, the Swedish FA (SvFF) announced on Monday as the giant striker won the Golden Ball award for the country's best male player for the 10th year in a row.

The 36-year-old Manchester United forward, who retired from international football after Euro 2016, played 114 games and scored 62 goals for Sweden, including a spectacular four-goal salvo against England in the first game at the arena in 2012.

Ibra has now won the Golden Ball a record 11 times - since its inception in 1946 no other player has won the award more than twice - and his contribution to the game will be honoured with a 2.7 metre statue outside the Friends stadium.

"It feels unreal. Many are thinking 'Why him?' and so on, but after all the hard work over 15 years in the national team and 20 years in my club career, it feels like it's being appreciated," Ibrahimovic said as he accepted his award.

"You usually get this after you die, but I still feel alive. When I die, this (statue) will live on forever."

The Diamond Ball for the best female player went to 33-year-old Chelsea goalkeeper Hedvig Lindahl, who won the award for the second year running thanks to her key role in Sweden's silver medal-winning team at the Rio de Janeiro Olympics.

Already in Lisbon ahead of their Champions League game against Sporting Clube de Portugal on Tuesday evening, Real Madrid have been mobbed by groups of fans, with Cristiano Ronaldo the most popular among them.

Upon arrival at their hotel in the Portuguese capital, around 300 people gathered to welcome the players.

Although no autographs were signed, Sporting academy product Ronaldo and Zinedine Zidane, in particular, were asked for selfies from the group of predominantly teenagers.

On Monday evening, the team will eat and remain at the Pestana Palace in a residential part of the city until 19:30 CET, when Zidane will be joined by goalkeeper Keylor Navas for the pre-match press conference.

Half an hour later, the full touring squad is set to train behind closed doors on the Estadio Jose Alvalade pitch as they hone their plans for the match.

Barely 24 hours after that, an expectant crowd of around 50,000 spectators will take to the stands to see their team do battle against their former hero.

Juventus forward Gonzalo Higuain will miss Tuesday's Champions League match at Sevilla with a bruised thigh, the Serie A champions said on Monday.

Juventus, who need a win to qualify from Group H with one match to spare, said in a statement that the Argentina forward sustained the injury during the closing minutes of Saturday's 3-0 league win over Pescara.

The Turin side will also be without defender Andrea Barzagli, winger Marko Pjaca and forward Paulo Dybala, who are out with long-term injuries. Defender Medhi Benatia has not recovered from a knock to his right knee and will also miss out.

Central defender Giorgio Chiellini, who has not played since limping off during the Serie A win over Napoli on Oct. 29, was included in the squad.
Email : [email protected]
Προηγούμενο : Man City ready to pay 233m euros for Messi | Επόμενο : Benzema responds when called upon
Προβολές : 354
- 2503 προηγούμενη ημέρα