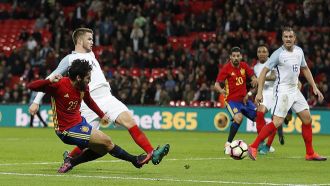 Wednesday, 16 November 2016
Late goals from Iago Aspas and Isco helped Spain rescue a 2-2 draw at the death versus England in an international friendly played on Tuesday night at Wembley Stadium in London.

For the large majority of the match Spain were a disjointed side that committed far too many errors in defence and had difficulty containing England's speedy wingers. In attack, La Roja did not muster anything until the final stages when the second half substitutes paid dividends. Nevertheless, the result keeps head coach Julen Lopetegui's unbeaten record intact.

Lopetegui's starting XI had a couple names in it that did not appear in last week's World Cup qualifier against Macedonia. Namely, Pepe Reina enjoyed a rare start in goal, Iñigo Martinez and Cesar Azpilicueta got nods in defence, while midfielder Juan Mata and 35-year-old striker Aritz Aduriz were also included. But the main story was the formation. Lopetegui opted for a 3-4-2-1, but the three-main back line faltered and by the 25th minute, Spain had reverted back to a four-man defence.

England hardly had a touch in the opening minutes, but when they did get a hold of the ball, it led to the game's first goal. Spain lost possession just inside their own half and poor defending allowed Adam Lallana to feed a pass into Jamie Vardy, who then drew a penalty on Reina. Lallana stepped up and calmly converted the spot kick to hand the hosts a 1-0 lead.

England grew more into the game with the early advantage and found success by pressing whenever La Roja came into the England half, while using Raheem Sterling and Vardy on the counter-attack to keep the Spanish defence on their heels.

But the rest of the half devolved into a series of fouls and a surprising number of yellow cards for a friendly. Lopetegui's men were unable to mount much of an attack to worry England No. 1 Joe Hart. If anything, England looked the stronger side and perhaps with some better finishing the Three Lions would have been up by two heading into half-time.

The start of the second half saw a pair of changes made to the Spanish line-up. Koke replaced Mata while Iago Aspas came on for Vitolo, but minutes later Spain found themselves down 2-0 as a thumping Vardy header doubled the home side's lead. Jordan Henderson played a ball in the area that curled over the heads of the offside Jesse Lingard and Sterling, but the onrushing Vardy, who was left unmarked by Martinez and Dani Carvajal, was there to meet it with a diving header that Reina had no chance of stopping.

The pace of the English attackers was wreaking havoc on the Spanish defence, who didn't help themselves out with a slew of mistakes, and if not for a diving save from Reina, Theo Walcott would have made it a 3-0 game just a few minutes after the Vardy goal.

At the hour mark Lopetegui made another two changes in attack, with Isco replacing Silva and Alvaro Morata on for the ineffective Aduriz. Spain's intensity was higher with the second half substitutes on the pitch and finally England's second half goalkeeper Tom Heaton was forced into a save on a low-driving shot from Morata.

Nolito was then brought on for Sergio Busquets to add some late punch, but it was Aspas who would be the one to start the comeback. Spain did well to counter quickly, with Morata spraying a pass out wide to Aspas, and from there the former Liverpool man took advantage of the space left to him by John Stones and scored past Heaton.

La Roja charged late and Isco had the equaliser on his boot in the first minute of added time, but his shot was deflected out for a corner. The Real Madrid man would redeem himself when he gathered in a pass off his chest and from the narrowest of angles fired in from the right as the clock ticked past 95 minutes to give Spain an improbable 2-2 draw.

Practically ruled out of the Madrid derby already, Gareth Bale and Mateo Kovacic are going through solo gym sessions to reach match fitness, though it remains highly unlikely they'll be back in time to face Atletico.

That said, Karim Benzema, Pepe and Casemiro are all close to being deemed ready, which is sure to hand Zinedine Zidane a much needed fitness boost.

Only four days away, both Real and Atletico are dealing with several notable injuries, meaning the team that best adapts will likely be the one to steal the three points come Saturday.

Attempts to renew Lionel Messi's contract will be an arduous process with Barcelona keen to keep the Argentine attacker at the forefront of the Blaugrana project for years to come, at the same time aware that he'll need time to decide his future.

However given that this issue will not be solved the blink of an eye, the Catalan club have moved swiftly to shore up the future of other star players by commencing negotiations with Luis Suarez, Marc-Andre Ter Stegen, and Sergi Roberto, whose contracts end in 2019.

That's partly down to an understanding that the first step to renewal is by guaranteeing Messi a good environment to work in. The club probably did themselves no favours when they let Dani Alves, a player Messi admires greatly, leave in the summer, but the extensions of Javier Mascherano and Neymar have done enough to show they mean business at this stage.

The Catalan side also understand that, beyond the astronomical salary worth 50 million euros, the 29-year-old continues to crave titles and the club must create the environment necessary for success.

As such, MARCA understands that Barcelona staff have not been surprised at Monday's revelations and has agreed to play on Messi's terms.

Indeed, the club have thus far shown their willingness to renegotiate their last contract signed in 2014 but concede that, if anyone, it's Messi who deserves the final say on the outcome of a potential eighth contract renewal.

On Tuesday at the club's headquarters, Atletico Madrid held their Ordinary General Shareholders' Meeting attended by members representing 98.29 percent of the capital stock of the red and white entity, all of whom appeared delighted with the financial health of the club.

Two main items were on the agenda.

"The General Meeting approved the annual accounts of the club relating to last season - the year ends in June. This generated a positive operating result of 24.3 million euros and a net profit after tax of 3.9m," a statement on the club website read.

For the second item, the statement continued; "The General Meeting approved the revenue budget and expenses for the current campaign, drawn up in accordance with the criteria established by the LFP and UEFA Financial Fair Play Regulations. At the same time, Atletico expects to achieve 'an income figure of 266.1 million euros and expenses of 265.3m.'"

In both cases, the resolutions were adopted with 3,563,345 votes in favour, of which 3,362,395 corresponded to shareholders represented on the board of directors and 200,950 to minority shareholders.

The City Council also announced that on Thursday there will be a presentation of the urbanisation plan for Atletico's new stadium of Atletico and surroundings.

This will be held in the Plenary Hall of the district of San Blas from 19.00 hours CET.

Jose Manuel Calvo, delegate of Sustainable Urban Development, will be in charge of explaining the details regarding both the urbanisation and the expected time frames for the execution of the works.

Manchester City players have been warned not to have sex after midnight, according to recently exiled midfielder Samir Nasri.

One of a number of talented players quickly axed by Guardiola, the Frenchman has given a detailed insight into the demanding nature of the famed coach's planning.

Top priority for the Catalan upon his arrival in Manchester was upping fitness levels across the playing staff, and this meant that the club's stars were banned from activities such as sex that could induce unnecessary muscle injuries.

"Relations must be before midnight. Even if you have a free day the following day," Nasri told L'Equipe.

"It's so you can have a good night's sleep.

"He told us this is how he managed to get the best out of [Lionel] Messi and [Robert] Lewandowski, and for them to avoid the maximum number of muscular injuries."

As well as the curious sex ban, Guardiola is also known to be particularly hands-on when it comes to training and video analysis, with Nasri admitting that the ex-Barcelona coach is something of a perfectionist in terms of implementing his style of play.

"With Guardiola, on the first day of training, you know how you should play, how to press and also how to stand off the ball," he added.

"The next day, you have videos for everything that you have to do.

"He will not bully you, but he will do everything to make you progress, to get you to know you how to best position yourself and how to play. He's a picky person."

Varane: I see no reason to leave Real Madrid

Fierce competition for defensive berths at Real Madrid has not perturbed Raphael Varane, who says he has no intention of quitting Los Merengues in the near future.

Sometimes found missing out to more experienced pair Sergio Ramos and Pepe, the talented Frenchman has insisted that there's no current benefit in leaving the Estadio Santiago Bernabeu, and refused to rule out remaining at the club for the rest of his career.

"Why not? Football is going very fast, but now I would say yes," the centre-back replied when asked by Le Figaro about staying in Madrid long-term.

"I see no reason to leave. Things are very good at Madrid."

Despite now being considered as one of the best defenders in the world, Varane wants even more success in his career, with the Frenchman highlighting a regular role at Real Madrid and trophy wins with France as his two key objectives.

"I want to continue to be a regular for Real Madrid. That's a long-term objective. I want to have game-time and win trophies," he added.

Set to captain his country against Ivory Coast on Tuesday evening, the 23-year-old hailed Madrid coach Zinedine Zidane as a positive influence on his career to date.

"He is a young coach who has already won the Champions League... He is capable [of managing France]," said the youngster.

"That suits me because I am a true perfectionist, I like to work on all the points that I can improve, and that is what motivates me and pushes me to assume responsibility."