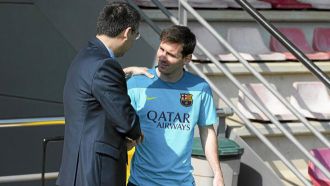 Barcelona admit they are "working to try and convince Messi"

Tuesday, 15 November 2016
Lionel Messi's doubts towards renewing his contract with Barcelona, which runs out in 2018, has dominated the sports agenda across the city and much of Europe today.

In line with MARCA's exclusive, that the player told the Blaugrana of his decision not to renew in July, fellow Spanish newspaper Sport have published their own 'confidential' piece in which the club itself 'admitted that it is working to convince Messi to extend his contract'.

This coincides with the words of Barcelona president Josep Maria Bartomeu: "I don't know what will happen in the future, but we'll try to explain to [Messi] that he's at the best club in the world."

Although many sources acknowledge that the Catalan club are yet to convince their talisman to renew, one has claimed that the MARCA exclusive was based around: "revenge against Barcelona for refusing to attend the newspaper's awards gala on October 25 ... The club believe not going to the gala led to this front page and they do not want to put more fuel on the fire for a battle that is not helpful to them."

Barcelona know that financial muscle alone in the region of a 48 million euro salary is not enough to ensure Messi's continuity at the Camp Nou, but remain intent on a long-term contract that guarantees a role with the club post-retirement.

Today, only the man himself knows whether he'll decide his future and renew soon, wait until 2018, or somewhere in between. He could decide to stay in Barcelona, where he's been since the age of 13, or try a new adventure in English football.

If Lionel Messi decided to leave Barcelona in the summer of 2018, Manchester City is the club that has the best chances of obtaining his services.

In addition to the growing potential of the playing staff, there is Pep Guardiola's presence on the bench, Txiki Begiristain as director of football and Ferran Soriano as executive director.

It's an undoubted incentive for the Argentinian who worked with them for four, seven and five seasons respectively.

In September, a Barcelona newspaper reported that Guardiola had telephoned Messi and Neymar to try to make his move, something the coach denied on October 18, the day before the Catalans' 4-0 win at the Camp Nou.

"I did not call Messi, I want him to finish his career here [in Barcelona]," Guardiola said at the time.

"But just the same, the kid might want a change, for his children, to learn English, or for a new experience.

"If he decides to leave, there will be a list of 4-6 clubs that will want to sign him in.

"But that will be decided by him, not me or anyone else."

"It would be natural for Messi to finish his career at Barcelona," he said to RAC1.

"He will decide, but if he calls us one day, we will open the door for him immediately."

A few words that were listened to with nervousness by the Blaugrana directors, aware that it was Messi himself that left the door open.

Messi thinks it through

It all started in the second week in July, when Messi was trying to relax during vacation with his wife Antonella, two sons and his wife's family when yachting around the crystalline waters of Ibiza.

After going back and forth in his mind, Messi came to an important decision: not to renew his contract with Barcelona, but rather wait until the end of the year and half left on his deal to then decide on his future.

Back then, he spoke to his father and another confidant, and made his intentions clear to Barcelona president Josep Maria Bartomeu, with Messi even having briefly considered the possibility of not finishing out the contract, which ends on June 30, 2018.

After recovering from the initial shock, Bartomeu insisted that everyone remain calm, asking the player to think about what he was doing twice and the Barcelona president remitted the 250 million euro release clause in his contract after the seventh and final time the player renewed with the club in May 2014.

That's how Barcelona and the Messis left it and since then there hasn't been any official contact between the parties.

To put that crisis into its proper context, it is important to remember a key event. Just a few days earlier, on July 6, the Spanish courts condemned Lionel Messi and his father Jorge to 21 months in prison for three separate instances of fraud, amounting up to 4.1 million euros, in 2007, 2008, and 2009, while also fining the two Messis for failing to declare taxes for 10.1 million euros in earnings from the player's image rights. Lionel Messi was condemned to seven months in prison for every year he committed fraud (7x3=21) and was forced to pay a 2 million euro fine for failing to declare the aforementioned amount in taxes. Meanwhile, his father faced the same prison sentence and was hit with a 1.5 million euro fine. The court case began in June of 2013, and by September he'd paid up to 5 million euros to the Spanish tax authorities for those three instances of fraud to clear up his name with the officials.

Eleven days before being found guilty, on June 26, Messi faced another set-back, this one sporting related. Losing to Chile in the Copa America Centenario final was heartbreaking, and missing a decisive penalty in the shoot-out didn't help matters. It was the third final he lost in just three years and he couldn't handle it. That same night he said he was leaving the Argentinian national team. Fortunately, that came to pass and on September 2 he returned to the Albiceleste to beat Uruguay 1-0, scoring a goal of course.

Precisely, the fact that Messi changed his mind with the national team is a reason to see the glass half full when negotiating his new contract. Already having finalised Neymar, Sergio Busquets and Javier Mascherano's new deals, Luis Suarez's nearing completion, and Marc-Andre ter Stegen, Andres Iniesta and Ivan Rakitic next in line, Bartomeu will call Jorge Messi with one goal in mind. He will look to avoid becoming the president that let Messi walk away. Bartomeu knows it won't be easy, which is why he had to have a more conciliatory tone than he did during an interview with The Telegraph on November 1st. "In two months, we'll start talks with Messi for his contract renewal. I don't know what will happen in the future, but without a doubt we'll always try to explain to him that he is at the best club in the world, that this is the best place for him to live, and that he is having the best experience of his life with us."

At the club, those working on the deal are realising that a simple pay raise for a player who some argue is the best in the world to 48 million euros won't be enough (21 million + add ons). The club will offer him a long contract so he'll retire at the Camp Nou and will then continue to tie him to the club with a post-playing career role, all of that once he fulfills his desire to play with his childhood club Newell's Old Boys where he played from ages 6 to 13.

Barcelona are well aware of how important family is to Messi's ultimate decision in terms of his priorities. They will also offer him a competitive team around him so he can continue to make history and win trophies, and the institutional backing he hasn't always received at times in the past. It is in that light that we should interpret Bartomeu's unconditional support on the day of the court ruling: "Lionel, whoever attacks you is attacking Barcelona and its history. We'll defend you until the end. Always together!"

And Messi? His father's intent is to start negotiating or at the very least begin listening to the club's offer, which means the situation has changed between the parties since that second week in July. The delicate scenario with the Spanish tax authorities is the biggest obstacle, because Lionel Messi believes that he and his family have been unfairly prosecuted and targeted in a smear campaign, not to mention the discriminatory way his case was dealt with in comparison to Infanta Elena's similar legal case. The legal complaint will be heard between January and June 2017, and the player wants to wait until that legal case is out of the way before deciding on his future on the pitch. He'll make the choice with his wife and keeping his two sons in mind, an influential role once left to his father.

Right now, only Messi knows if he'll renew his contract in January or if he'll wait until his contract runs out in 2018 before coming to a decision on his future. It is one that could mean continuing his playing days in Barcelona, where he's been since the age of 13, or if he'll embark on an entirely new adventure altogether, like the Premier League perhaps.

Romeu: Spain are the better team and I hope they prove that against England

Although Oriol Romeu has spent much of his career in the Premier League, with Chelsea and now Southampton, the midfielder is confident of a Spain victory over England on Tuesday night.

Yet to make his debut for the national team, the 25-year-old appeared for numerous Roja youth teams as he made his way through the ranks at Barcelona.

"I hope Spain win, they are superior and I hope that they prove that," Romeu told MARCA. "The England team has gone through a complicated, difficult time and now they seem to have regained focus.

"England needs its national team to do well, now there's a new coach and it seems to be slowly getting better.

"They've formed a good spine to their team, especially with Tottenham Hotspur players, they're very talented."

Having played across the Premier League, LaLiga, and German Bundesliga, Romeu highlighted the key difference between the countries before highlighting the big threat to Spain for Tuesday's game.

"If there's something that separates English football, it's the fans," said the midfielder. "They support you at all times, it's amazing and it's something that differentiates football in England from elsewhere.

"For the players it's perfect and the atmosphere at Wembley will be very special.

"For me, [Adam Lallana] is the player to look out for. He's dangerous near the area and gets in between the lines."

Real Madrid welcomed back Sergio Ramos from a knee injury for their first session in lieu of the Atletico Madrid match next Saturday.

Picking up the sprain in the last international break, the defender has had to wait out another cycle and is hopeful of making a playing return when domestic duty is back on the agenda at the end of the week.

Exercising with the first-team squad and completing training without issue, Ramos' chances of being available for the derby have been boosted significantly.

Luka Modric and Marcelo also took part in the session having ended their spell with Croatia and Brazil early, alongside 10 Castilla players who made up the numbers.

Zinedine Zidane set up a number of ball, running, and shooting drills for those at Valdebebas before a short match on a small pitch.

Karim Benzema, Pepe, and Casemiro all worked in Madrid but away from the main group while Mateo Kovacic and Toni Kroos were also focused on their injury recovery programmes.