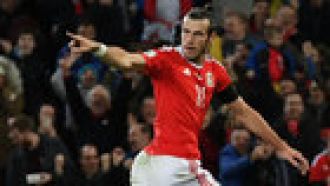 Sunday, 13 November 2016
An 85th-minute header by striker Aleksandar Mitrovic gave Serbia a 1-1 draw against Wales after Gareth Bale had given the home side a first-half lead in a pulsating World Cup Group D qualifier on Saturday.

The result left Serbia second in the section on eight points from four games, two behind leaders Ireland who were 1-0 winners in Austria. Wales are third on six points while fourth-placed Austria have four.

Bale fired the Welsh ahead with his 26th international goal when he unleashed a sizzling low shot in the 30th minute to close in on their all-time leading scorer Ian Rush (28).

Bale missed a golden opportunity to double the home side's lead moments before Serbia struck at the other end, when Mitrovic got away from his marker to head home Antonio Rukavina's cross from the right.

Aritz Aduriz became the oldest man to score for Spain in an international, netting the final goal in their 4-0 victory over Macedonia in the World Cup qualifying Group G match on Saturday.

At 35 years and 275 days, the Athletic Bilbao striker was 50 days older than the previous record holder Jose Maria Pena, who had set the mark in 1930 when scoring against Portugal.

Spain had to overcome resistance from a dogged Macedonia side before running out easy winners with a strong second-half display to remain top of the group.

An own goal by Darko Velkovski broke the deadlock at the Nuevo Los Carmenes stadium in Granada in the 34th minute after Julen Lopetegui's side survived a couple of early scares, and Vitolo doubled the lead in the 63rd.

Nacho Monreal and substitute Aduriz struck in the space of a minute late on to turn what at times was a testing encounter game into a thrashing.

Spain top the group on 10 points, level with second-placed Italy, who won 4-0 at Liechtenstein on Saturday

Macedonia's preparations were hit right before the game as goalkeeper Igor Aleksovski got injured in the warm up.

He was replaced by Stole Dimitrievski, although it was his opposite number David de Gea who made the first intervention, repelling a close range header from Daniel Mojsov.

Spain were let off the hook again in the first half when Genoa forward Goran Pandev glanced a header wide, although the home side monopolied possession and soon settled into the game.

Real Madrid striker Alvaro Morata was thwarted twice by Dimitrievski and David Silva had a goalbound shot headed off the line.

Spain owed their breakthrough to a mishap from Velkovski, who tried to glance Dani Carvajal's cross over the bar but instead nodded past Dimitrievski and into the top corner of his own net.

Spain defender Marc Bartra nearly gifted an equaliser away at the start of the second half with a misplaced pass to Enis Bardhi but made amends by blocking the midfielder's shot.

Julen Lopetegui's side tightened their grip on the game when Vitolo arrived at the far post to head in from close range, aided by sloppy goalkeeping from Dimitrievski.

That effectively signalled the end of Macedonia's resistance, and Monreal and Aduriz showed no remorse.

The Arsenal defender curled Carvajal's cutback into the bottom corner in the 84th minute and a moment later Aduriz grabbed the fourth, turning in Silva's low cross from close range.

Bale continues to open the scoring with goal against Serbia

For the fourth time in the past three games, Gareth Bale scored as he gave Wales a 1-0 lead in their World Cup qualifying tie against Serbia, and he continues to score the all-important first goal.

In the past 10 days, Bale has scored against Legia Warsaw in the Champions League, Leganes in the league - where he bagged a brace, and against Serbia on Saturday.

Along with those four goals, Bale also bagged an assist as he set up Karim Benzema against Legia.

The 27-year-old has seven goals in 14 games for Real Madrid so far this season, as well as four in four for Wales as they look to qualify for the 2018 World Cup.

With each game, the Welshman's influence continues to grow.

For Wales he is indispensable, and that is shown by the facts: Bale has thus far been involved in five of Wales' eight goals (four goals and one assist), and he has scored 11 goals and provided four assists in his last 11 fixtures in Cardiff.

Bale's goal against Serbia was his 26th for Wales and that opens up a three-goal lead between him and Trevor Ford in third place on Wales' all-time scoring list, two behind Ian Rush on 28.

Support for Gustavo Poyet had been running thin, and after fan groups threatening to boycott future matches until his sacking, the club decided they had had enough, choosing Victor Sanchez Del Amo as a replacement.

The Verdiblancos opted for Del Amo despite others like Gregorio Manzano, Luis Garcia or Michel having more experience precisely because they believed his ideas and solutions were best positioned to get the team out of their current slump.

Confusion and murmurs started to arise after star player and the club's leading goalscorer Ruben Castro was inexplicably dropped from the team's starting XI, and no central unifying way of playing was evident despite several months time to begin drawing up ideas, so by the end few had faith in Poyet's abilities to lead the squad.

Madrid-born Victor Sanchez del Amo started out as a player in Real Madrid's academy, La Fabrica, though is most known for a lengthy spell at Deportivo La Coruna, where he would end up returning for his first coaching job.

He took over in April 2015 and strived at a club he knew well, in charge for a year and half, though his time at Olimpiacos was less succesful as he only lasted a few months there.

The international break was an opportune chance for the club to revalue the direction it was heading, and Del Amo's pitch convinced them he is the right man for the job, though it will be far from easy as Betis currently sit just two points above the drop.

Zinedine Zidane is the best coach in the world in the eyes of Leicester City ace Riyad Mahrez, with the Ballon d'Or candidate praising his countryman's securing of the Undecima.

Although he considers Claudio Ranieri the best coach in the Premier League, the highly-rated player believes the very best is found in the dugout of the Estadio Santiago Bernabeu.

"In England, the number one is our manager, but I would say Zidane is the best in the world because he won the Champions League," the French international told Goal.

The 25-year-old was also asked which player he would sign for The Foxes if he had an unlimited budget and he begrudgingly chose Leo Messi.

"I'd say Messi, although he would take my place!" the Premier League champion joked.

"[As for the best three players in the world], I would say they are Cristiano Ronaldo, Leo Messi and maybe Antoine Griezmann or Luis Suarez."

Since helping Leicester win the league last season there has been plenty of speculation linking Mahrez with a move to LaLiga, so these recent comments will surely fuel that further.

Modric warms up for Madrid derby with Croatia win

A 45-minute run out in the second half of Croatia's 2-0 win over Iceland helped Luka Modric to continue his return to match fitness, with the 31-year-old hoping to start for Real Madrid in next Saturday's derby against Atletico Madrid.

Replacing his club teammate Mateo Kovacic at half-time, the Ballon d'Or candidate helped his national team grind out all three World Cup qualifying points in front of an empty Stadion Maksimir, with FIFA having issued the Croatian FA with a stadium closure punishment.

Marcelo Brozovic - who also scored the opener in the first half - benefitted from Modric's introduction as he set the Inter player up for the victory-clinching second in stoppage time.

The Croatia No.10 - who wore the captain's armband when he entered the fray - also had a chance to mark his substitute appearance with a goal, but Hannes Thor Halldorsson saved his effort.

With the win, the Croatians sit top of Group I with 10 points from four matches.