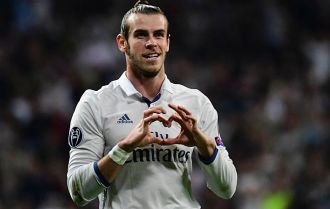 Monday, 31 October 2016
Real Madrid will start the week with another renewal, this time Gareth Bale putting pen to paper on a deal with Los Blancos until 2022.

The Welshman will appear at the Estadio Santiago Bernabeu at 13.30 CET on Monday to complete the formalities and talk to the press.

It's the fourth consecutive week that Real has extended the contract of one of its players, following those of Toni Kroos, Luka Modric and Lucas Vazquez.

Chelsea racked up a fourth consecutive league win without conceding a goal as they outclassed Southampton with strikes from Eden Hazard and Diego Costa at St Mary's on Sunday.

Antonio Conte's side produced a vibrant display to inflict a first home defeat of the season on Southampton and underline their title credentials.

Hazard cut back from a tight angle and rifled a shot through Fraser Forster's legs after six minutes to give Chelsea a lead they never looked like relinquishing against a Southampton side who could do nothing with their superior possession.

Hazard forced Forster into another save before halftime while he also kept out Costa as Chelsea continued to look dangerous on the break.

Spain striker Costa doubled the lead 10 minutes after the break with a sensational strike, receiving a pass from Hazard and beating Forster with a swerving right-foot shot from 25 metres to take his league tally for the season to eight.

Chelsea, who moved back above Tottenham Hotspur into fourth spot just one point off the leaders, had the opportunities to increase their tally with Costa sqaundering another glorious chance when he elected not to shoot.

Southampton's best chance fell to Charlie Austin who headed over the bar.

Chelsea have now amassed double the amount of points (22) that they managed after 10 games of last season when their hopes of defending their title under Jose Mourinho were already in tatters.

"Southampton's record at home is very good -- we knew that. But we knew if we carried on our form, we'd cause them problems. We worked hard," Chelsea defender Gary Cahill told Sky Sports.

"It's too early in terms of any team talking about winning the league but its important to stay near the top."

Prandelli keen to move on from Barcelona controversies

Valencia have experienced a decent start under new boss Cesare Prandelli and the Italian is only interested in looking forward after the rollercoaster 3-2 loss to Barcelona last weekend.

Travelling to Deportivo La Coruna on Monday night, Los Che are seeking their third away win in a row whilst facing a side languishing in the relegation zone that they themselves occupied only recently.

"We played very well against Barcelona, but tomorrow will be different," Prandelli asserted to reporters. "I do not like controversies, they are not football.

"The day after Barcelona I only thought of Deportivo, we've spoken enough about Barcelona.

"Deportivo are an organised team but we go with the mentality of doing everything to win."

Kicking off at 20:45 CET in Galicia, Valencia are still yet to draw a game this season but have tied their last two matches with Depor.

Real Madrid the only undefeated team left in LaLiga

Arecord-breaking run leaves Real Madrid consolidating its position at the top of LaLiga, and Los Blancos are now also the only team across the league yet to have lost a game.

Eibar beat Villarreal 2-1 on Sunday to hand the Yellow Submarine their first loss of the year, and Sevilla dropped points as Zinedine Zidane's side strengthened their league position.

Real have now gone on a 26-game unbeaten run in all competitions, with the squad achieving 20 victories and just six draws in the process.

Their last loss coming on April 6 against Wolfsburg, Zidane's men look to beat the 34-match streak achieved under coach Leo Beenhakker in 1988/89.

Just a little bit above that mark is Luis Enrique's Barcelona, who went an incredible 39 matches without defeat.

With the derby against Atletico Madrid and the Clasico coming up in recent weeks, the record won't be an easy one, but the truth is that Zidane's numbers since taking over the club speak for themselves.

One of the most interesting matches in Serie A had a special supporter in the stands on Saturday as Paulo Dybala joined the Juventus faithful for the Napoli fixture.

The Argentine striker filled his social networks with messages of encouragement to his teammates before, during and after Juve's 2-1 victory against one of their strongest rivals for the Scudetto.

Vezo and Neymar clashed in the tunnel

The last few moments of the match between Barcelona and Granada were not without drama after Neymar and Ruben Vezo clashed on the pitch - a feud they'd reignite in the tunnel after the match.

Yellow carded after a late challenge on one of the visiting players, Neymar got up only to be met by and angry Vezo who placed his head on the Brazilian's.

Both players were pulled apart, Vezo also receiving a yellow for his troubles.

Once the referee had blown the final whistle, the scuffle began again in the tunnel as the pair continued to trade insults against each other.

They had to be separated as they headed to the dressing room but the matter passed off without any further incident.
Email : [email protected]
Προηγούμενο : Higuain hits winner in first match against former team Napoli | Επόμενο : Luis Enrique: Aguero will not force a change in Barcelona's approach
Προβολές : 341
- 2320 προηγούμενη ημέρα