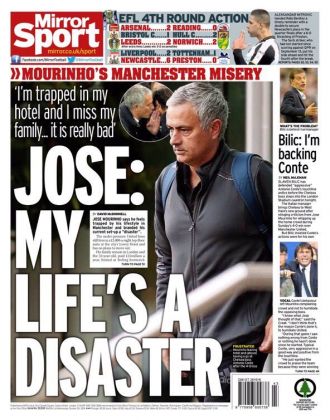 Mourinho: My life in Manchester is a disaster

Difficulty adapting to life in Manchester has seen Jose Mourinho describe his time at the club so far as a disaster, struggling without his family nearby and even feeling trapped in his new surroundings.

The Portuguese boss' family is still in London, and the ex-Chelsea man opened up on his personal life as a partial explanation as to his struggles as a coach in recent weeks.

"My life in Manchester is a bit of a disaster," Mourinho said to Sky Sports. "For me, I want to walk a bit but I can't."

Still living in a hotel, the lack of privacy wasn't as intense in London, something that is currently bothering the United coach.

"If I want to go out to a restaurant for a meal, I can't, which is really bad."

Daniel Sturridge sent Liverpool into the League Cup quarter-finals with two clinical goals in a 2-1 home victory against Tottenham Hotspur on Tuesday.

Sturridge opened the scoring in the ninth minute and doubled the tally 20 minutes after halftime, before Spurs striker Vincent Janssen pulled a goal back with a penalty late on in a match where both teams fielded much-changed teams.

Arsenal's Alex Oxlade-Chamberlain also scored twice as they reached the last eight with a 2-0 win over second-tier Reading, while Newcastle United romped to a 6-0 victory over 10-man Preston North End.

Premier League Hull City won 2-1 at Bristol City with Harry Maguire and Michael Dawson scoring within four minutes either side of halftime before Lee Tomlin pulled back a stoppage-time goal for the hosts.

Leeds United's fourth round tie at home to Norwich City went into extra time with the match tied at 1-1.

Guardiola: I am very happy with Aguero

In the lead up to the Manchester derby in the EFL Cup, Pep Guardiola made it abundantly clear to journalists that he was very happy with Sergio Aguero and that there was no problem between the pair.

The striker was left out of the starting line up at the Camp Nou when City played Barcelona in the Champions League, leading to suggestions that all was not well behind the scenes.

"I want to be clear: I am very happy with Aguero," he said during his pre-match press conference.

"I hope he will stay here for a long time because he is a special player and we can't forget how many goals he has scored here.

"When we make mistakes, they are my mistakes...."

Although his team has stuttered in the Premier League in recent weeks and this game might benefit Pep's first-choice XI, the coach confirmed he was going to change things around for the trip to Old Trafford.

"I will rotate because I have players who deserve to play," he continued.

"And besides, the last match was very hard and some players are tired.

"I haven't decided who will play as I need to see how the players react in training."

It's only been a few weeks since City got the better of their rivals and the magnitude of the match hasn't been lost on Guardiola.

"Let's play seriously, as we have always done, and try to win the game.

"I always expect the best of United and although they lost last weekend, they have quality players and the experience of Mourinho.

"To go to Old Trafford is always difficult as they are a very physical team with a dangerous counterattack from players like Rashford or Martial."

Although rotation will be applied, the City boss admitted it would be foolhardy to completely change the outlook of the side with youngsters and reserves.

"It's not always easy to play with the reserves when you've been training with the first team.

"I'll have a think but we can't forget that we haven't won in our last five games.

"To play five academy players together is not a good idea now, I need to protect them," he concluded.

Messi spends time off with family at Eurodisney

The Barcelona squad was given three days off after the last-minute 3-2 victory over Valencia on Saturday, and Lionel Messi took advantage and took his family to Eurodisney in Paris.

In doing so, the Blaugrana No. 10 missed Monday's LaLiga awards, which celebrated some of last season's best throughout the league.

As such, Messi was not present for his Best Striker award, though it won't be the first or last the Argentine receives in his career.

Bayer Leverkusen twice squandered the lead before crashing out of the German Cup second round 4-3 on penalties at third tier Sportfreunde Lotte on Tuesday to become the biggest casualty of the night.

Lotte were down to 10 men from the 79th minute with the score at 1-1 but they refused to buckle and snatched a memorable victory over top flight Leverkusen after the game finished 2-2 following extra time.

Hamburg SV, without a win in the Bundesliga this season, got a boost from their 4-0 demolition of third division Hallescher FC with United States striker Bobby Wood netting twice.

Hertha Berlin also advanced with a 2-0 win over St Pauli while Borussia Moenchengladbach found little resistance as they beat second division VfB Stuttgart by the same score, Fabian Johnson netting once and setting up the other for Lars Stindl.

Freiburg, however, suffered the same fate as Leverkusen, losing 4-3 in a shootout at home to second division Sandhausen.

Champions League club Leverkusen, who have slipped to 11th after losing their last two Bundesliga matches, were desperate to beat a Lotte side who stunned Werder Bremen in the previous round.

Leverkusen, with coach Roger Schmidt banned for two matches following a verbal attack on his Hoffenheim counterpart in their 3-0 weekend home league loss, struck after 26 minutes when Kevin Volland fired home despite the attentions of two defenders.

The visitors were lucky to keep the lead when a Lotte effort was controversially ruled offside minutes later, but the hosts scored right after the break when Leverkusen's Roberto Hilbert, completely alone, deflected a harmless cross into his own goal.

Lotte's Tim Wendel was then sent off before Volland struck again in the first half of extra time with a close-range volley.

However, the home side refused to give up and came back once more through Kevin Freiberger's equaliser before keeping their cool to claim a famous victory in the penalty shootout.