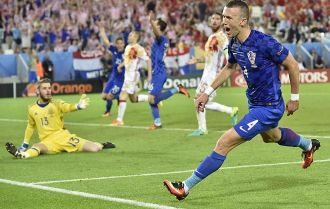 Wednesday, 22 June 2016
Spain's Euro 2016 campaign took an unexpected turn as they fell 2-1 to Croatia on Thursday night at the Stade Bordeaux in Bordeaux. The result means La Roja finish second in Group D with six points and will now face Italy in the Round of 16.

Álvaro Morata gave Spain an early lead in the seventh minute, but Croatia responded with a Niko Kalinic goal just seconds before half-time, before Ivan Perisic won it in the 87th minute.

Spain had every opportunity to get the result they needed to win the match and the group, but wasteful finishing, defensive errors and a saved penalty on Sergio Ramos left the reigning continental champions shaking their heads in disbelief as they left the pitch.

There were no changes from head coach Vicente del Bosque from the starting XI that pulverised Turkey 3-0 last Friday in Nice, and their fine form carried into the affair against the Croatians, as La Roja converted their first scoring opportunity. David Silva collected a ball on the right and filtered in a wicked pass to Cesc Fabregas who delivered a ball past Croatia goalkeeper Danijel Subasic, allowing Morata to swoop in and finish from a yard out.

There was no giving up from Croatia though, and a Kalinic shot from distance tested Spain goalkeeper David De Gea. That was then followed by Barcelona's Ivan Rakitic hitting the crossbar after a massive giveaway from De Gea. Initially it looked like Rakitic's chip over the Manchester United goalkeeper had grazed the underside of the crossbar and crossed the line, but replays showed the ball had not crossed the goal line, keeping the score at 1-0.

Spain had to be alert against Croatia, but still Del Bosque's men were the dominant side, and almost stretched their lead to two when a Nolito shot just shy of the half-hour rolled wide. Morata then almost latched onto a ball into the area minutes before the break, but Subasic was there to snatch it away.

Nevertheless, the Croatians played very positive football, and on the brink of half-time they were rewarded for their efforts when Kalinic beat Sergio Ramos at the near post on Perisic's cross and side-footed a volley past De Gea to make it a 1-1 game after the first 45 minutes. The goal snapped Spain's seven-match European Championship shutout streak.

Croatia continued to grow into the game, as they looked to spring the upset and take top honours in the group. De Gea found himself tested on many an occasion, and only some wayward passing or finishing spared the reigning European champions.

Del Bosque looked to restore order in midfield and brought on Bruno Soriano for Nolito, and soon Spain were back in their comfort zone of possessing and passing the ball, but with little penetration into the Croatian defence.

The second change made saw Morata yield his spot to Athletic Bilbao forward Aritz Aduriz, but it was defender Ramos who nearly put Spain back in front, but his header off a corner kick spun wide. The Real Madrid man was then gifted with another chance, this time from the penalty spot, after Silva was brought down by Sime Vrsalko in the area. But Ramos' spot kick was saved by Subasic, keeping the match locked at 1-1.

Spain would rue the Ramos miss, as just minutes from time, with La Roja trying to finish off the match and finish the group in first, Croatia struck on the counterattack and scored to take a late 2-1 lead. It all started with an Aduriz shot that was blocked, and Croatia transitioned quickly, led by Kalinic, who fed the charging Perisic on the left and the Inter Milan's shot took a slight deflection off the foot of the sliding Gerard Piqué and beat De Gea at the near post.

There would be no late miracle for Spain, as they must now turn their attention to a heavyweight showdown with the Azzurri on Monday in Saint Denis.

Cristiano Ronaldo is the athlete who earns the most money in the world, the first time this actually happens to a football player, and has just won his third Champions league. But, despite all that, he isn't the most loved player on the planet.

His childish behavior on the pitch, his bad reactions when opponents score and his narcissistic shirtless celebrations make him the typical villain, while in the meantime his more graceful aspects are overlooked, just like his donation of the Champions League bonus to a charity.

Then came the stories and the reactions about his penalty miss against Austria. What is all this about? Cristiano is not playing well at all in the European Championship and has not been able to drag his side to any wins yet, with Portugal drawing both games as he continues to struggle to help his team when their path ahead remains difficult.

There was also a contrast between the unanimous disappointment over Juanfran's miss in Milan and Cristiano's unapologetic celebrations. Cristiano is stigmatised a lot, and all the eyes are on him.

The Portuguese has plenty of defaults but not many players have suffered from such a lack of respect. Sometimes rightly so, because he could have handled himself differently, but sometimes there is an eagerness to discredit him. Despite all of this, he can still celebrate with his huge paycheck at the end of each month.

It was the under-pressure custodian's error of judgment that allowed Ivan Perisic in to seal the 2-1 win after a lightning-fast counter attack, but the coach was at pains to point out that the side win and lose as a collective.

"We can't blame De Gea for the goal, if we lose we are all guilty," Del Bosque told a packed post-match press conference.

"It wasn't the path that we wanted to take, but that's football.

"We controlled the game and we haven't played badly today."

There's now a five day break until the match against a fearsome looking Azzurri side, giving Spain ample time to alter the mood of disappointment.

"We have time to analyze the match against Italy," Del Bosque continued.

"Losing was frustrating and ideally we wanted to qualify first, but we've earned the right to continue and we'll get ourselves up for the next game and look to move forward."

Antonio Conte's side play a more aggressive style, typified by Giorgio Chiellini at centre-back, and if the three-peat is to be realised, then Spain may have to match their counterparts in that department.

"I think the physical level of our players is good," was Del Bosque's only response in conclusion.

Although Spain suffered defeat, Alvaro Morata was on target for the third time at Euro 2016, just a couple of hours after his new club Real Madrid announced his signature from Juventus.

The 23-year-old will be going back to his former club just two years after leaving Madrid and impressing with the Italian giant, scoring in the Champions League final against Barcelona over a year ago.

Morata scored only seven minutes into La Roja's defeat and will claim the goal despite just pushing the ball over the line as the impressive forward targets the top scorer award after winning the prize at Under-19 and Under-21 levels.

Spain lost to Croatia by a 2-1 scoreline and will now meet Italy on Monday night in the knockout phase.
Email : [email protected]
Προηγούμενο : France through as top of group after Switzerland stalemate | Επόμενο : Σφαγή με τους «μεγάλους»
Προβολές : 447
- 1997 προηγούμενη ημέρα