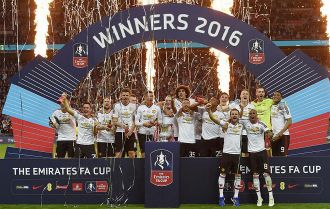 Sunday, 22 May 2016
Manchester United substitute Jesse Lingard's superb volley in extra time secured a 2-1 win over Crystal Palace in the FA Cup final at Wembley Stadium on Saturday for their first major trophy in three years.

However, their Dutch manager Louis van Gaal was left wondering whether it would be enough to preserve his job two seasons into a three-year contract amid British media reports that Jose Mourinho would be offered the job next week.

The game was locked at 1-1 after 90 minutes, Jason Puncheon coming off the bench to put London side Palace ahead 12 minutes from time before Juan Mata equalised three minutes later.

United central defender Chris Smalling was sent off in the extra period for a second yellow card but Lingard produced a moment of class to give under-pressure Dutch manager Louis van Gaal a first trophy in his two years at Old Trafford.

"It's fantastic to win this title for the club, the fans and also for me," Van Gaal said. "Now I have won a Cup in four countries. Not many managers can say that so I am very happy.

"I don't want to talk about leaving the club."

Underdogs Palace took the lead when Puncheon, who had only come on six minutes earlier, deftly controlled a long ball into the area and fired past United goalkeeper David de Gea.

But within three minutes Wayne Rooney went on a brilliant run across the edge of the Palace area and crossed for Marouane Fellaini to set up the equaliser for Spaniard Mata.

"I saw it come across and it landed nicely for me, all I had to do was hit it sweet and luckily I did that. As a sub you always have to be ready. Thankfully I was," Lingard said.

Van Gaal, who arrived for his news conference carrying the trophy, added: "It was a super goal when we needed it.

"It was unbelievable that we had injuries again but in spite of going down to 10 players we showed the spirit we have shown on the road to the final."

Palace manager Alan Pardew, who played when the London club lost the replayed 1990 final against United, was frustrated by two refereeing decisions from Mark Clattenburg, who will be in charge of next weekend's Champions League final.

He felt Wilfried Zaha should have had a penalty when tackled by Rooney and that play should have been waved on as Connor Wickham recovered from Smalling's challenge and scored.

"It was a great cup final and could have gone either way," Pardew told reporters.

Palace did not get quite enough from speedy winger Zaha, who United once bought for 15 million pounds ($21.76 million) before selling him back to their opponents, and Yannick Bolasie.

The London side threatened mainly from set pieces, although the tall Fellaini was a valuable asset in defending them.

United made the more dangerous chances throughout the game, hitting the post twice early in the second half through Fellaini and young French striker Anthony Martial.

Rooney was an influential captain in his deeper midfield role and 18 year-old Marcus Rashford made several of their best opportunities, but had to go off injured in the 72nd minute.

Van Gaal could not say how serious the injury was or whether it would prevent Rashford joining the England squad next week.

It was the second time United had won the FA Cup after having a player sent off. Irish defender Kevin Moran was the first man dismissed in a final, when they beat Everton in 1985. Smalling was the fourth and the first Englishman.

There was a bonus in Palace's defeat for West Ham United, who will join United in the Europa League next season after the east London side move into their new Olympic Stadium ground.

Bayern, who also won the Bundesliga for a record fourth consecutive time this season, kept their cool in the shootout after a goalless 120 minutes with Douglas Costa beating keeper Roman Buerki with Bayern's last penalty after two Dortmund players had missed.

Mourinho to be appointed Manchester United coach within next few days

Jose Mourinho will be named Manchester United coach, with the club planning on announcing the Portuguese boss' arrival early next week.

Despite Louis Van Gaal securing this season's FA Cup with a 2-1 extra-time victory over Crystal Palace, the Manchester club hierarchy has deemed this insufficient for the Dutchman to continue.

According to the BBC, an agreement has been reached between the two parties.

The Red Devils finished the Premier League in fourth and fifth place during Van Gaal's two years in charge of the club.