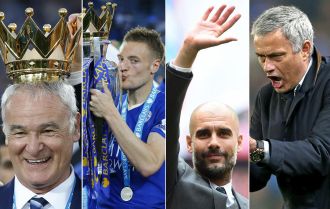 From Leicester's league to the Guardiola era

How the season unfolded

Leicester City became Premier League Champions after an historic season in which they recorded 23 victories and only three defeats; a feat made even more impressive by the fact that they played in the Championship just two seasons ago.

Vardy and Mahrez the key to success

Goals from Jamie Vardy and Riyad Mahrez destroyed their rivals. Between them, they scored 60% of Leicester's goals this season, with making history by scoring in eleven consecutive games. Mahrez got 17 goals and 11 assists.

Harry Kane' 25 goals saw him become the first English top scorer in the Premier League since Kevin Philips in 1999/2000.

Chelsea - the worst reigning champion since 1992

Chelsea lifted the Premier League trophy last season but couldn't manage better than a 10th spot during the 2015/16 campaign, the worst result from a reigning champion since 1992.

In an unusual season, the two Manchester clubs battled it out for the last Champions League spot. In the end, it was City who salvaged their honour to qualify for Europe's most elite competition.

Usurped by the magnitude of Leicester's feat, the Hammers were the big surprise this season, winning at the Etihad Stadium, the Emirates and Anfield to reach an impressive seventh spot in the table.

Norwich also went down with them but the relegation of these two historical teams caused a stir. Aston Villa leave the top flight after 29 years, while Newcastle return to the Championship for the first time since 2009.

When the Premier League returns for a new season, Pep Guardiola will have replaced Manuel Pellegrini at Manchester City, while Jose Mourinho might be on his way to the other half of Manchester.

Aitor Karanka will make his debut as coach in the top flight after securing promotion with his Middlesbrough side. Along with Guardiola, he is one of two Spanish coaches in the Premier League.

Since 2001, Barclays has sponsored the Premier League. From the 2016/17 season, the lion will be the symbol of the league.

Burnley and Middlesbrough return to the elite

The Premier League will be welcome Burnley and Middlesbrough back as they return to the highest division after one and seven years respectively.?

A Premier League without Terry, Howard and Arteta

The Chelsea captain could extend his stay at Stamford Bridge, but nothing is yet determined, while Mikel Arteta and Tim Howard have both said their farewells at Arsenal and Everton.