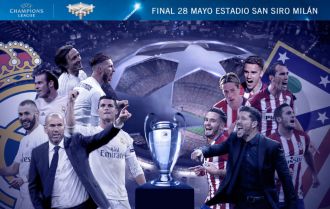 Thursday, 05 May 2016
For the second time in three years, Real Madrid will meet city rivals Atlético Madrid in the Champions League final following their 1-0 win over Manchester City in the semifinal second leg on Wednesday night at the Estadio Santiago Bernabéu.

Gareth Bale was the hero as his 20th minute shot forced a Fernando own goal that would end up being the lone goal scored by either side after 180 minutes of football.

Real will now seek their 11th European crown at the San Siro in Milan against Los Colchoneros in a rematch of the two teams' epic final in 2014 in Lisbon.

The hosts were by far the superior side but were unable to put away a pesky City side that stayed in it until the final whistle. However, just like in their last two league encounters, it was Bale who proved to be the difference in what was a tight, tension-filled two-legged tie.

There was both good news and bad news for manager Zinedine Zidane on the injury front prior to the match. Midfielder Casemiro and forward Karim Benzema were forced to miss, thus giving Isco a chance to shine alongside Toni Kroos and Luka Modric, while Jesé was tabbed to replace the Frenchman in attack. However, Zidane got a massive boost with the return of Cristiano Ronaldo, the Portuguese's first match since a 3-0 win over Villarreal on April 20th.

Bad luck struck Real's English visitors inside the first 10 minutes as centre-back and captain Vincent Kompany hobbled off with an injury. Real looked to prey off of City's vulnerability in the back, and Gareth Bale did just that when he opened the scoring midway through the first half. Dani Carvajal fed an onside Bale and the Welshman's shot barely nicked off the leg of Fernando before banging off the far post and in past City goalkeeper Joe Hart.

City tried to get going at the other end through their playmakers Sergio Aguero and Kevin De Bruyne, but Manuel Pellegrini's men found difficulty linking their midfield with attack. It was not until a minute before half-time when City got their first real look at goal when Fernandinho did well to create space off of Carvajal and sent a shot that grazed the outside of the near post.

Real maintained control of the affair to start the second half, and were much closer to a second than City were to a first, however Los Blancos were done in by poor finishing: A Modric shot went straight to Hart, then Ronaldo failed to convert two chances, one a header that Hart easily saved and then a low-driving shot that the City No. 1 smothered. Bale came within inches of scoring his second and putting the tie to bed just after the hour mark, but his spinning header banked off the post and out.

However, there was no change in the scoreline, much to City's favour and it set the stage for a nervy final quarter hour for the anxious Bernabéu crowd. But City lacked the intensity, urgency and cutting edge in the attacking end to truly trouble Keylor Navas in goal. Outside of a De Bruyne free kick and a long-range dipping effort from Aguero, there was little for the Costa Rican to have to worry about.

In the end, Real did enough at both ends to secure their passage to Milan and a rematch with their city rivals.

The 2016 Champions League Final will have a familiar look to it as Spanish neighbours Real Madrid and Atletico Madrid will fight it out for club football's biggest prize in Milan.

When Zinedine Zidane and Diego Simeone's sides kick off on the 28th May, 734 days will have passed since the dramatic night in Lisbon that secured Los Blancos their tenth European title.

The San Siro will be the battleground, 2131 kilometres from the city where Sergio Ramos' late equalizer broke Atletico's hearts.

After wins for the Madrid clubs against Bayern Munich and Manchester City on Tuesday and Wednesday night respectively, Real Madrid will hope to get their hands on the trophy again, just as Iker Casillas did two years ago.

The ingredients will be much the same. Zidane, assistant to Carlo Ancelotti at that time, has grown as a coach, and will contest the final against Simeone, who has instilled confidence to the Atletico system.

Two years since the epic header from Ramos, the game of Angel Di Maria's life, a decisive goal from Gareth Bale, and Diego Costa's injury.

The Colchoneros have grown in experience during the last two years, and there is no doubt that it will be a game filled with passion.

Whatever happens, one thing is for sure - it is yet another proud moment for Spanish football.

Zidane: No favourite for final

Zinedine Zidane is thrilled that Real Madrid will play in the Champions League final, but tampered expectations for what he said will be a difficult match.

Los Blancos booked their trip to Milan on Wednesday night, winning 1-0 against Manchester City at the Estadio Santiago Bernabeu.

They will face cross-town rival Atletico Madrid in the May 28th championship for a chance to win the club's 11th European crown.

Real Madrid defeated the Rojiblancos in the 2014 final, but Zidane expects this year's game to be evenly matched.

"Let's enjoy now and then think about Sunday's game [against Valencia]."

The Citizens nearly spoiled the party in the final minutes, as Sergio Aguero's blast went just over the bar in the 89th minute and goalkeeper Keylor Navas injured himself clearing his line moments later.

"We had to suffer until the end," Zidane said.

"But the fans supported us as they always do at the Bernabeu.

Cristiano Ronaldo played his first match in two weeks after recovering from a thigh issue, and Zizou was happy with the Portuguese striker's play.

"He tucked away and has done a good job defensively," he said.

"But the important thing is that the work of the whole team has allowed us to achieve this."

Ramos: We will give our all in Milan

Immediately after defeating Manchester City 1-0 (1-0 on aggregate) in the semi-finals of the Champions League, Real Madrid's captain Sergio Ramos was already looking forward to the final against Atletico Madrid.

Even though they've made it to the final of this prestigious tournament for the second time in three years, Ramos couldn't help but recognize the difficult road it took to got them there.

"Yes the season has been incredibly difficult. But our unity as a team and hard work has led us led to two finals in three years," Ramos said.

"Additionally the team, and especially the fans, totally deserve it. We couldn't be more thankful for their support as they have once again demonstrated their influence as the 12th man. All that is left is to literally leave everything on the field in final," he added.

When confronted with the question whether or not City was a difficult opponent, Ramos had a diplomatic yet fair response.

"There are easier games and there are harder games, then there are Champions League games. They always require more effort and concentration."

"We have eliminated Manchester City even though everyone said they were a difficult opponent. All we can do now is enjoy the victory."

When asked about the difficult season they've had, Ramos was optimistic about their current state.

"In football you'll always have good times and bad times. That's just football. But even though we have suffered we have found success and that's what's important. Like I said, all we can do now is enjoy this incredible moment."