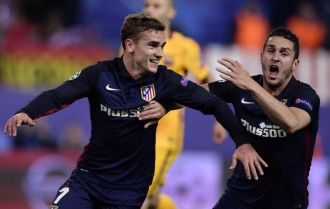 Πέμπτη, 14 Απριλίου 2016
For the second time in three seasons, a Barcelona Champions League campaign has ended with a quarterfinal second leg defeat to Atlético Madrid, as they reigning European champions fell 2-0 on Wednesday night at the Estadio Vicente Calderón.

Antoine Griezmann's goal in the 35th minute and a penalty conversion in the 87th minute gave Atlético a 3-2 win on aggregate. It also ends Barcelona's run at a historic second straight Treble.

Barcelona, and in particular Lionel Messi, never found their rhythm, as the five-time Ballon d'Or winner cut a disconsolate, frustrated figure for the entire 90 minutes. It was the first time Barcelona had been shut out in a Champions League match since suffering a 1-0 defeat to Atlético at this very stage of the tournament two seasons ago.

The notable change in Diego Simeone's starting XI was the inclusion of Yannick Carrasco up top with Griezmann, as the Belgian replaced the suspended Fernando Torres, who was red-carded in last week's first leg. Meanwhile, Barcelona boss Luis Enrique rolled out his first choice Champions League starting XI

As to be expected, it was a tenacious affair from the very start, and Atlético's pressing early on nearly resulted in a quick Gabi strike, but the team captain fired high. Atlético's bright continued as they used the long ball before whipping a ball into the middle. One such chance saw Griezmann head right at Barcelona goalkeeper Marc-André ter Stegen.

Barcelona were uncomfortable throughout, as Atlético denied the Catalonians their preferred method of playing out from the back using short, quick passes. The frustration of Barcelona's start attacking trio, Lionel Messi, Neymar and Luis Suárez, was evident as the chances came few and far between for the reigning continental champions.

While Griezmann's first headed chance at goal went straight to Ter Stegen, his second left the German with no chance at saving and it gave Atlético a 1-0 lead in the match and the tie, 2-2, based on their away goal at the Camp Nou. Saúl played a fantastic ball from the right side, and with Barcelona centre-backs Gerard Piqué and Javier Mascherano out of position, Griezmann was allowed to rise up and smack his header into the top right corner.

With the goal, Atlético were then happy to sit back, concede possession and look to hit Barcelona again on the counter. Carrasco nearly did just that with a chance right before half-time, but Ter Stegen got low to make the save. Outside of a long-range effort from

Atlético remained the stronger side at the start of the second half, and Saúl nearly doubled the lead when his header beat Ter Stegen only for it to hit the crossbar.

By the hour mark Barcelona had no choice but to go full bore at the Atlético. Luis Enrique made two changes, taking off Dani Alves and Ivan Rakitic and replacing them with Sergi Roberto and Arda Turan, the latter receiving a hostile reception from the fans of his previous club.

As the match approached the final quarter-hour, Barcelona's desperation grew. Time and again the visitors crashed the Atlético box, but the hosts stood firm, furthering inflaming the tempers of Luis Enrique's men.

With their defence completely exposed and their attack flailing, Barcelona succumbed to a late Atlético counter, with Filipe Luis charging past the Barcelona defense before crossing for Griezmann, only to see Andres Iniesta use his arm to block the pass in the area. The Frenchman stepped up and managed to sneak the spot kick under Ter Stegen to make it 2-0 in the match and 3-2 on aggregate.

Still, Barcelona had hope, and the champions had a shout for a penalty in the final minutes when a ball looked to have struck Gabi on the arm right inside the area. Instead, the referee whistled for a free kick outside the box, which Messi sent over the crossbar to extinguish Barcelona's hopes of a sixth European crown.

Gabi: If it's inside the box, I'm first to admit it's a penalty

Atletico Madrid's Gabi praised his team and their performance after they knocked Barcelona out of the Champions League.

His side beat Barcelona 2-0 on Wednesday evening at Estadio Vicente Calderon to go through to the semi-finals 3-2 on aggregate.

Two goals from Antoine Griezmann were enough to send Atletico through to only their fifth appearance in the penultimate stage of the competition, and the captain was proud of his side's display.

"I think we made a tremendous effort, we hit the crossbar, and the team qualified deservedly," he said.

"The team defended very well," the midfielder went on, "and were very good on the counter attack."

The match ended in controversy as Gabi appeared to handle the ball just inside his penalty area, but although the Spaniard admitted it was a foul, he remained uncertain about where it took place.

"Yes it was a handball, but I don't know if it was inside or outside [the penalty area]. Sometimes they're given and sometimes they're not. If it's inside, I say it's a penalty."

Fortunately for Atletico, the referee believed it was outside, with Lionel Messi narrowly missing from the resulting free kick.

Gabi's side hung on in the final moments to see their way through to the semi-final, but the midfielder was keen to focus instead of getting carried away.

"It's early, we've knocked out the champions, but we need to show our humility, as ever. We are not yet finalists."

Finally, on the topic of potentially winning the Champions League, the Atletico captain was optimistic: "We hope that it turns out this way because we have earned it."

Simeone: This time it was our turn

Having witnessed his team defeat reigning European champions Barcelona, Diego Simeone was left full of praise for his players, highlighting the togetherness of his squad and the unity felt at the club. A feeling that can only propel them forward.

Trailing 2-1 from the first leg, the Argentine was rallying the troops before tonight's crucial Champions League fixture, and on tonight's display it worked. A brace from Antione Griezmann was enough to turn the tie on its head, and send Atletico Madrid through to the semi-finals with an exhilarating victory. An enigmatic character, who can often be seen on the touchline with his arms waving up and down galvanizing the crowd, Diego Simeone was left with nothing but positivity towards his players.

He stated: "The team brings together players who follow the same beliefs. I feel joy for them. We can win or lose, but we always believe in values. The slogan 'never stop believing' is immersed in this club."

The game was keenly contested, with fine margins proving key. When asked about his thoughts of the two-legged tie, he said: "We faced a very good opponent but we worked very well in the first half of the tie at Camp Nou. The idea was to fight for every ball until the game was won."

There was a cavernous atmosphere at the Estadio Vicente Calderon, a cauldron of noise which has become an integral part of Diego Simeone's project at Atletico Madrid.

"The reception the players got and the response of the fans throughout the game was great to see and I enjoyed watching it all unfold.

"Having achieved three years among the top four in Europe is an important step but I hope there are many more steps to come."

Luis Enrique: We are in a rut

Luis Enrique acknowledged that his Barcelona side are currently suffering from a bad run of form, a run which has seen them surrender points in the title race and be eliminated from Europe's biggest competition.

The comments came after he saw his side crash out of the Champions League quarter-finals, falling to a 2-0 defeat to Atletico Madrid, which gave the men from the capital a 3-2 aggregate win.

Having now suffered a run of three successive defeats, the current European champions are facing their worst spell of form for some time. Not only are their hopes of sealing back to back Champions League trophy's now over, two consecutive defeats in La Liga has seen the title race blown wide open.

"Clearly we are in a rut of results. We were not at our best today. We lacked lucidity. Tonight's display is evidence that we are not in our best form right now" Luis Enrique said.

It was a tense and ferocious tie, with Atletico suffocating Barcelona's attacking spark.

"The game was as we predicted, although maybe you wouldn't expect your rival to sit back waiting for you to come on to them from the first whistle. They played to score a goal and defend well, and they have achieved it."

Late on, Barcelona were denied a penalty for an apparent handball inside the area by Gabi. However the Barcelona coach refused to draw on it, stating: "I'm told it was a penalty, but I have nothing to say about it."

Antoine Griezmann: I am very proud of this team

Atletico Madrid have qualified for the semi-finals of the Champions League after two goals from star striker Antoine Griezmann. The Frenchman scored before half time and with a penalty deep into the second half.

Andres Iniesta's handball for the penalty typified Barcelona's poor performance, while Griezmann's double was proof of a perfect team display from Atleico. Their performance was helped by the racous support in the Estadio Vicente Calderon.

"The crowd really got behind us," Griezmann said, "and that always pushes us in important matches like this."

The players were visibly lifted by the support, and they produced a beautiful passage of play in the lead up to the first goal.

"Saul's pass to me was incisive," the forward explained, "änd the goal was a reward for all the team's hard work."

The team were made to work hard by the one goal deficit from the first leg, and also because they were facing one the strongest teams in Europe.

"Barcelona always make you suffer, but we withstood the pressure and I am very proud of this team.

The outcome of the match could have been different as Barcelona had a late shout for a penalty, but Griezmann said litte about the incident.

But the penalty was not given and Atletico are through. Is it their year?

"Like our coach says," he concluded, "We will take it game by game."