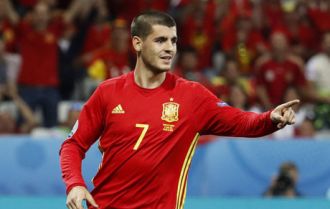 Σάββατο, 18 Ιουνίου 2016
Spain have reached the second round of Euro 2016 after waltzing to a 3-0 victory over Turkey in Group D action on Friday night in Nice.

Goals from Álvaro Morata in the 34th and 48th minutes sandwiched a Nolito goal in the 37th minute to hand La Roja a decisive and comprehensive win over a dispirited Turkey side that mustered very little.

Unlike Monday's narrow 1-0 win over the Czech Republic, a Spanish victory was never in doubt and sent a signal to the rest of Euro 2016 that the 2008 and 2012 champions are very much back and hungry for a third straight continental crown.

Andres Iniesta gave a masterclass in midfield and allowed the rest of the Spanish attackers to spread their wings against a Turkish defence that always seemed a step behind.

Head coach Vicente del Bosque made no changes from the starting XI that opened the tournament against the Czech Republic on Monday, and to no one's surprise they took the game early to Turkey, peppering Volkan Babacan's goal with chances from Morata, Gerard Piqué and a near own goal from defender Hakan Balta.

There was a clear intent from Spain to try to play to the full-backs on the wings, with Jordi Alba and Juanfran each making dangerous runs looking to spread out a Turkish defence which had been clogging the middle to try to limit Andres Iniesta and the rest of the Spanish playmakers. Just after the half hour mark Spain crafted such a chance, when David Silva fed a charging Juanfran down the right, who crossed for Nolito but the Celta man's shot was blocked.

Spain would not have to wait long though, and minutes after Nolito had his shot blocked, he served up the game's opening goal picking out Morata with an inch-perfect cross that the Juventus man headed in past Babacan to give La Roja a 1-0 lead. It started with a ball down to Alba, who then quickly played back to Nolito and from there the former Barcelona and Real Madrid youth teamers connected for the goal.

Del Bosque's men smelled blood, a less than two minutes later it was suddenly 2-0, when a Cesc Fabregas ball into the area was dealt poorly with by Turkish defender Mehmet Topal, and Nolito was there to pounce and volley in past Babacan, further stunning Fatih Terim's team.

There was more of the same from Spain to start the second half, and before Turkey could even entertain thoughts of a comeback, Morata bagged his second of the game to extend the Spain lead to 3-0. Iniesta waved his magic wand and threaded in a ball to Alba, who cross for Morata and it was the easiest of pushes into goal for the Juve man.

For all intents and purposes the final half hour of the match turned into a training session for Del Bosque's team, as they comfortably moved the ball around and were hardly troubled in the back. Turkey were miserable, evidenced by the play of Barcelona midfielder Arda Turan, who was whistled mercilessly by his own fans every time he touched the ball in the second half.

By the final 10 minutes, outside of a few cheers and chats from the Spanish fans, you could hear a pin drop in the Stade de Nice, as the match played out without further incident. For Spain, it was a textbook triumph and sets up the team nicely for the group stage finale versus Croatia on Tuesday, while allowing Del Bosque the luxury to plan well in advance for the last 16.

After a complete performance from reigning European Championship holders Spain against a disappointing Turkey side, coach Vicente Del Bosque had every right to feel pleased with his players.

Despite the ease with which his side secured another victory, Del Bosque remained cautious.

"We have fulfilled the first objective which was to qualify," he said, "but we haven't won anything yet."

In both games that Spain have played at the tournament so far, there's been a vast improvement on the horrific 2014 World Cup showing, something which didn't escape the coach.

"We have managed to qualify in the second game and that's a good sign.

"At the moment we are on the right track, but there's still much work to be done on the road ahead," Del Bosque continued.

Noting just what the ingredients were that won the match, the coach suggested a mixture of great defending and sharp finishing.

"Today we have been lucky and have been effective.

"Our defence has been good, we marked the spaces well, and we always intend to play on the front foot and try to score goals."

Gunnarsson: Ronaldo never asked who I was when I requested his shirt

According to daily newspaper Bild, the Real Madrid striker was condescending when Gunnarsson asked to swap shirts with Ronaldo at the end of the Group E game.

"It's true that I asked for the shirt," Gunnarsson said. "He didn't ask who I was though. He said that there was no problem, but inside the dressing room.

"I'm tired of this story. I want to focus on the next game, this is the past and I have nothing left to say."

Italian fans waited 82 minutes and Eder's solo goal before seeing their team take the lead and book themselves a ticket to the next round of the competition.

Friday's early kick-off may not be remembered as the most exciting of games with Sweden failing to register a shot on target for the second game in a row despite managing to score in the first game thanks to an own goal.

There haven't been many goals in the tournament as a whole, with none of the games registering more than three goals.

Italy didn't play as well as they did on Monday against Belgium but they will now be looking to top the group with a draw or a win against Ireland on Wednesday.
Διαβάστε περισσότερα...