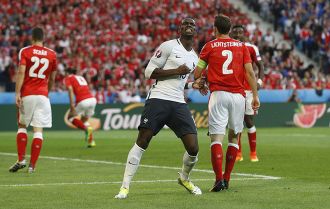 France through as top of group after Switzerland stalemate

Δευτέρα, 20 Ιουνίου 2016
Switzerland booked their ticket to the last 16 of Euro 2016 by picking up a 0-0 draw on Sunday evening at Lille's Stade Pierre-Mauroy against hosts France, who progress as Group A winners.

It was a very quiet match from both sides' attacking players, but the draw suited the pre-match ambitions of both nations.

Les Bleus coach Didier Deschamps made a number of changes for this encounter given that his side had already secured qualification with wins over Romania and Albania, most notably leaving out Olivier Giroud and N'Golo Kante, both of whom were one booking away from missing their last 16 match.

Two players who did start were Paul Pogba and Antoine Griezmann, after both had been controversially dropped for the Albania match last Wednesday.

The Juventus man bossed the first half, forcing a couple of smart saves from Yann Sommer as well as blasting a shot against the crossbar.

Besides those efforts, however, neither side looked like scoring in a cagey first half, partly due to a lack of creativity in the French ranks, but mostly because of the excellent defending of the Swiss back line.

Aware of this and keen to ensure his side progressed as group winners, Deschamps introduced Dimitri Payet in the second half and the West Ham man almost added to his already-impressive Euro 2016 highlights reel when he followed in Pogba's footsteps by thundering a volley against the Swiss crossbar from a clever Moussa Sissoko cross.

As the clock ticked towards 90 minutes, France looked more and more like adding yet another late goal, while Switzerland hardly troubled Hugo Lloris - who equalled his coach's record of 54 matches as Les Bleus captain in the match - at all.

However, the Swiss held on for a vital point and finish as Group A runners-up, which means they will play the runners-up of Group C in Saint Etienne on June 25 in the next round.

The hosts, meanwhile, will play play a third place team in Lyon on June 26.

Ronaldo gets support from coach to continue taking penalties

Cristiano Ronaldowill continue to take penalties for Portugal despite losing his touch from the spot for both club and country, coach Fernando Santos said on Sunday.

Ronaldo, Portugal's all-time leading scorer, missed a penalty in the 0-0 draw with Austria in Group F on Saturday and has failed to hit the target in four of his last five penalties for Portugal and Real Madrid.

"If there is a penalty in the next game, Cristiano Ronaldo will take it and he will score," Santos told reporters. "He is used to scoring goals, he is a winner and he also reacts well when he makes a mistake. That is what we expect from him."

Ronaldo, who won a record 128th cap on Saturday, has had a disappointing Euro 2016 so far, failing to convert any of several good chances as Portugal have drawn both of their games.

Left-back Raphael Guerreiro has increased the pressure on Ronaldo's place as the free kick specialist after scoring with a superbly-taken effort in a 3-0 friendly win over Norway before the tournament when Ronaldo was not playing.

"Cristiano always wants to take the free kicks and it has always been him who has taken them," said Santos. "If Raphael had not scored that goal, nobody would be talking about this."

"We played really well against Austria without scoring and we have to continue with this attitude. We made Austria, who are ranked 10th in the world, look like a small team."

Santos said Portugal should not be ashamed of "being ugly" and that he had told his family that he would not be coming home until the day after the Euro 2016 final when he expected a party.

"Sometimes, I get the feeling that we are ashamed about being ugly, or not being pretty," he said. "If we have to be ugly and that brings us efficiency, we have to be ugly. I'm ugly by nature and I don't mind being even uglier."

Portugal need to beat Hungary on Wednesday to make sure of qualifying for the knockout stages but Santos said he would be staying in France until the final on July 10.

"I am only going back to Portugal on July 11 and I am going to be welcomed with a party," he said.

Deschamps: I'm not blind, I know we can be better

France drew 0-0 with Switzerland on Sunday evening to ensure that they progressed to the last 16 of Euro 2016 as group winners, but coach Didier Deschamps was adamant that his side can and should play better.

Although Les Bleus hit the bar twice in the match, from Paul Pogba and Dimitri Payet, they struggled to create many clear chances and there was no late goal to snatch a victory as there was in their previous matches.

"I'm not blind, I know we can do things better," Deschamps said to M6 channel after the match.

"Everybody hopes for better [performances], the players included.

"In terms of control, we should be able to do better to avoid having to defend so much."

However, he did point out that few of the pre-tournament favourites have completely convinced so far in the tournament.

"I've watched the other matches too and there are few dominant teams," the 47-year-old said.

"We went out to get first and we did it, so our goal is achieved."

Deschamps also discussed Pogba in the post-match interview, the player he controversially left out against Albania, but who he started in the match in Lille.

"He [Pogba] was much better than in his first match," he said.

"He made things interesting with the two strikes he had."

Asked about the next round, Deschamps was pleased for the extra preparation time that his team will receive.

"It is a long week, it'll give us time to prepare."

France have a full week before their June 26 last 16 match, which they will play against a third place team - from either Group C, D or E - in Lyon.
Διαβάστε περισσότερα...